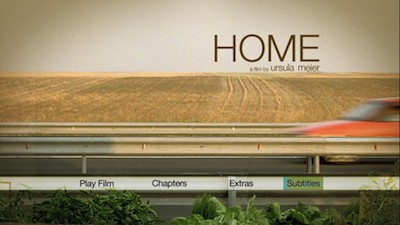 A tiny house sits on a grassy field next to a deserted stretch of unfinished French highway. As we will learn, the family that lives there moved to this remote location because their mother (venerable French actress Isabelle Huppert) has some kind of nervous condition and this is the only place where she feels safe. They've been there for some time, at one count possibly ten years. That's how long the unused pavement has been cutting through their front lawn. The movie Home is what happens when the builders finally come to finish the road and open it up to commuters.

The family dynamic is a mom, a dad, and three kids. The father, Michel (Olivier Gourmet, Mesrine: Public Enemy #1), is a good guy who keeps his family happy, going off to work every day to bring home the bacon but never letting the grind get him down. He and his wife, Marthe, get along well, and the family all plays together and enjoys each other's company. The eldest daughter, the worldly Judith (Adélaïde Leroux), even takes baths with her little brother Julien (Kacey Mottet Klein), and mom and dad hang out and splash in the tub, too. Judith is of age, and so is the only other adult in the house. She spends her days in a bikini, sunbathing while listening to death metal. She couldn't be more different than her little sister Marion (Madeleine Budd). Whereas Judith is a Lolita who has fully blossomed, Marion is like her mother to the extreme. She is anxious and concerned with germs. On the other hand, the boy Julien isn't concerned with anything. He's precocious and hyper and regularly indulged.

Ursula Meier's movie is a strange piece of work. Though she and her legion of screenwriters--there are five writing credits in addition to her own--take this solid foundation and erect a bizarre scenario on top, we are watching a parable without context. Home exists somewhere out of time, vaguely modern, but also vaguely apocalyptic. We never leave the confines of the house by the freeway, and dispatches from beyond sound almost alien. In a way, this could be a divergent off-ramp from Godard's Weekend. Reality is not as important as the message.

So, what is the message? I'm not sure there actually is one. As the cars begin to speed by their house, the family slowly loses its grip on its environment. They become more isolated, there is no exit onto their property. Dad parks the car across the four lanes, and they either have to dodge traffic to cross or crawl under through a sewer tunnel. Mother's illness begins to surface again as the noise and the movement get to her, Marion becomes obsessed with the effects of automobile exhaust, and Julien starts to go a little stir crazy. (In this, the movie is like Todd Haynes' Safe, only abstracted and with no cures offered.) Judith doesn't change her routine, her affectation of being unaffected remains intact, though she will eventually get in a passing car and go. Michel stays strong for everyone, but when he fails to get the family out, he becomes absorbed in his wife's psychosis and starts to go overboard in protecting her. Gourmet has the stand-out performance in Home, maybe because he gets the most to express. The good guy who loves to laugh with his children also gets his private moments--weary cigarettes stolen in the night, a quiet cry in his car, things that allow him to show some range. We get the sense that he signed on for something that has become more than he was expecting.

Home was shot by cinematographer Agnès Godard (35 Shots of Rum), and she captures the bucolic setting beautifully. As the highway encroaches on everything, she lets the natural transformation of the locale take over rather than resorting to tricks to show it. What was once green and clean becomes grimy and cluttered, and Godard understands that photographing it in exactly the same way in both states says more than any lens filter or special lighting ever could.

The problem is, as much as the images speak for themselves, I don't feel the script has all that much to add. The story's isolation ends up being its Achilles heel, and its weirdness becomes something the viewer grows complacent with rather than continually intrigued by. Yes, we watch this family go through the things they go through, deteriorating under the strain of an environmental madness they can't control, ultimately to come out the other side in a rather obvious way--the predictability of the final shots is proportional to the creativity of the central concept--but to what end? Home builds and builds to a harrowing climax, only to flinch from it. Apparently, all that came before is easily solved. Marthe just needed a good nap.

I suppose I might have been fine with a shruggable conclusion had I not already lost interest half an hour before. I think I could sense the whole lot of nothing that was coming, and the more it was obvious that Meier was painting her movie into a narrative corner, the more I drifted away. There are actually outcomes that are more trite that could have caused an even bigger pile-up than this--yet, maybe then at least Home would have been a movie that would have been worth getting upset about. Instead, I'll trade one cliché for another: Home, a nice place to visit, wouldn't want to live there, one visit is enough. 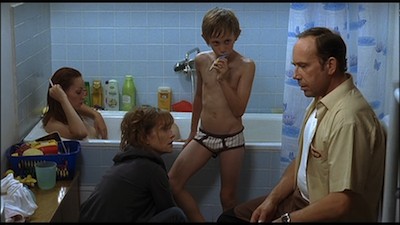 Video:
Home is released on DVD as a letterboxed 1.85:1 anamorphic transfer. It looks pretty good, particularly in the rendering of bright colors. The dark scenes look good, too, though less pronounced. There is an occasional graininess and some slight interlacing here and there, but it's very minor.

Sound:
The original French soundtrack is mixed in Dolby 5.1, and they have done a nice job with it. As the sound of the traffic increases, you can really feel it in the speakers. The noise needs to be ever-present and at times oppressive, and it works. The dialogue is woven into this nicely.

The optional English subtitles are good, placed properly and easy to read. 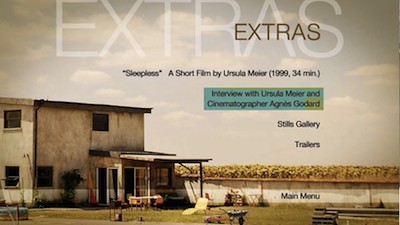 Extras:
There aren't a lot of extras on Home, but given that together the two main ones give an hour of programming, there's not too much to complain about either. The first bonus is an extensive interview with Ursula Meier and Agnès Godard in which the director and cinematographer discuss the movie at length.

The second is Meier's short film, Sleepless, from 1999. It's another odd piece, and shares some things in common with Home. I was a little underwhelmed by it.

Finally, there is a short stills gallery and the movie's trailer.

FINAL THOUGHTS:
Rent It. I give Home points for striving to do something different, but Ursula Meier's environmental parable strains to maintain its tone and central logic. The story of a woman (Isabelle Huppert) living with her family in an isolated location whose peace is shattered by the activation of a highway passing through her front yard is at times a fascinating mix of sci-fi themes and horror-movie consequences, but overall, this tale fails to come together for a satisfying conclusion or unearth any greater meaning. Excellent acting and beautiful photography keeps Home from being a complete waste of time, it's just a shame that the script couldn't rise up to the level of the talent laboring to make it come alive. 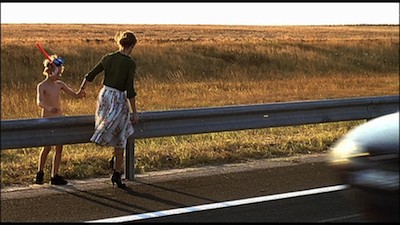