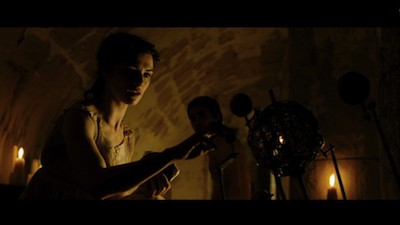 It didn't occur to me what hard times the historical epic had fallen on, or how much I missed seeing a really good one, until I watched Alejandro Amenábar's Agora. It seems lately we either get the bloated and self-important Ridley Scott style of costume drama (Kingdom of Heaven, for instance), or it's dumbed-down, dressed-up adventurin' like Prince of Persia. While Agora is not as long and grandiose as the historical pictures of old Hollywood, Amenábar's film is a richly drawn and intelligent story that hearkens back to better times, when stories of the past were seen as important parables to illuminate the present.

Agora is set in Alexandria near the end of the 4th Century A.D., as the Roman Empire is collapsing. Alexandria was an epicenter of culture and thought, renowned for its massive library. Of the many scholars and philosophers who gathered in the public square, known as the Agora, to debate the theories of the day, was Hypatia (Rachel Weisz, The Fountain), a teacher whose work has not survived but who is believed to have been ahead of the curve in regards to understanding the mechanics of the universe and the mathematical properties of cones and circles. Hypatia advanced revolutionary thinking, but at a time when a different kind of revolution was under way.

Alejandro Amenábar (The Sea Inside, The Others) and his regular co-writer Mateo Gil (Open Your Eyes) start their story at a point where Christianity is starting to become popular enough to gain real traction amongst the common populace. Having been outlawed by the Romans only until recently, it is still seen as an upstart religion, and evangelicals from either side regularly clash in the streets. Among the Christian faction is Ammonius (Ashraf Barhom, Lebanon), head of the "parabolani," a thuggish sect of monks who aren't above cracking skulls to make people see the light. A particularly theatrical demonstration by Ammonius captures the imagination of Davus (Max Minghella, The Social Network), one of Hypatia's slaves. Davus is a thoughtful man, and though the life of a slave is not a good one, it does afford him the opportunity to sit in on Hypatia's classes and observe. He not only gets the ideas she communicates, but he is in love with her. 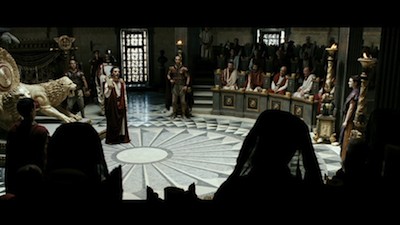 Not that Davus doesn't have competition. Also eager to take Hypatia's hand is one of her students, Orestes (Oscar Isaac, Robin Hood). Too bad for both of them, Hypatia has no time for romance, she's too devoted to her studies. Still, Orestes proves himself a noble suitor when the religious conflict reaches a fever pitch. The Christians storm the library and destroy it, changing the dynamic of the city and effectively ending the Roman influence in Alexandria. Positions shift, characters make hard choices, and Hypatia will eventually have to defend herself and her way of thinking.

Agora is an intellectually stimulating narrative, full of varied ideas and conflicts that have more to them than just blood and swords--though there are plenty of that for those who want it. Amenábar uses Hypatia's story to examine the uneasy mix of science, politics, and religion in society, as well as class structure and gender divides. Though there are clear heroes and villains, there is not an easy black-and-white morality. Hypatia, for instance, can be hypocritical, and her defense of equality amongst the differing faiths doesn't quite jibe with her failure to recognize that she treats her slaves as less than equal. Davus is far from a cliché "noble servant," but is a fully rounded character often at war with himself and his ethical contradictions. Only the mad monk Ammonius and the lead bishop of Alexandria, Cyril (Sami Samir, Munich), are painted with broad strokes, but they are balanced on both sides by minor reactionaries amongst the Romans and the far more sympathetic priest Synesius (Rupert Evans, Hellboy), another of Hypatia's students. Amenábar is more interested in the complexity of the tale than he is making something that fits expected archetypes.

In addition to being thematically edifying, Agora is also visually dazzling. The sets are marvelous, with impressive re-creations of the period architecture and statuary. The raid on the library is shot with an invigorating energy, including a surprisingly effective camera roll to show us how the world has been turned upside down. It should have been hokey and obvious, but Amenábar and cinematographer Xavi Giménez (The Machinist) stage it in such a way that it ends up being breathtaking. The way the camera spins ties into the visual motif of circles, which illustrates Hypatia's theories about the solar system and also indicates contrary moments of breakthrough and containment. There are massive crowd scenes, shots of the night sky, and even a scene out on the open sea that seamlessly blend special effects and live actors to make a convincing whole. Only the multiple shots of the Earth from outer space make for poor choices. These mostly come when Amenábar is using onscreen text to handle historical exposition, and the camera tricks only belabor the point. 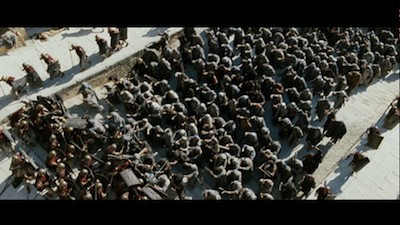 Amenábar reportedly wrote Agora for Rachel Weisz, and he couldn't have made a better choice. Weisz is perfect as Hypatia, capturing both her smartness and her compassion and communicating her inner discord as the result of both. Her main tool, like any good actress, is her expressive face, and the looks she gives in any given scene consistently transcend the spoken dialogue. Oscar Isaac makes a good partner for her, achieving a convincing transition from cocky young man to heartbroken romantic. Max Minghella is also good, though doesn't seem as adept at the more dramatic moments as his co-stars. He is best as the observer, any variance on his emotional state seems a little immature. Then again, Davus is under-developed as a person, so arguably a more adolescent approach was required.

It's a shame that Agora didn't get more attention when it came out this past summer, as it is actually one of the better dramas I have seen this year. While it may not go overboard with blood and thunder, it makes up for the lack of histrionics by being smart and emotionally rewarding. It's nice to see a grown-up movie that details the relationships of fully realized characters without falling back on clichés or expected story tropes. There is romance, but it is understated, and there is violence, but never overdone. Rather, Alejandro Amenábar remains true to his narrative center, and Agora brings history to life in a way that is relatable to the current times. Naturally, the filmmakers don't push any obvious parallel, but given how science and religion still disagree about the origins of man, there is much for today's viewers to chew on should they choose to explore the movie's subtext further. 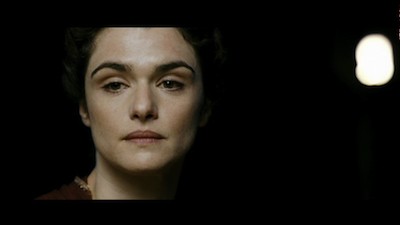 Video:
The widescreen 2.35:1 transfer on Agora looks splendid, showcasing the muted color palette and the heavy production detail to great effect. The image is sharp and the blacks, particularly when gazing at the night sky, are good and deep.

Sound:
A 5.1 audio mix of the English soundtrack uses surround technology very well, working through all the speakers in the larger scenes and properly centering the dialogue in quieter moments.

Extras:
The Agora DVD offers two opportunities for director Alejandro Amenábar to address the audience, a director commentary and director presentation. The latter is a very short video introduction, recorded by the director just before he did the commentary. Both features are in Spanish with English subtitles, and they reveal the filmmaker to be a thoughtful, meticulous artist, and his explanations add depth to one's understanding of his creation. 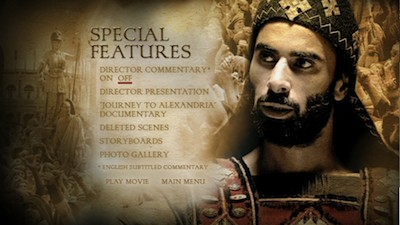 The hour-long "Journey to Alexandria" is a multi-part documentary covering the making of the movie, with specific segments on building the sets, the costumes, the characters and their historical origins, and the various stages of production: inception, shooting, and completion. You can play each piece on its own, or just run them all at once.

Seven Deleted Scenes run ten minutes, and they include a different prologue (more shots of the cosmos, essentially), alongside a handful of inconsequential trims (a discussion of Hypatia taking over the library, more romantic brooding from Davus, the aftermath of a brawl, the precursor to another brawl, etc.). A montage of the parabolani roaming the streets and enforcing their version of Christian law is the only thing here that I think would have added anything to the finished product, as it fully illustrates how bad they were on a day-to-day basis.

Though listed as storyboards, the gallery section is actually a collection of production drawings for the sets and the costumes--and it's exceptional work, at that. There is also a photo gallery.

FINAL THOUGHTS:
Highly Recommended. Alejandro Amenábar's Agora is a rich and wholly satisfying historical drama. Rachel Weisz stars as the 4th-century philosopher Hypatia, who was at the center of scholarly thought in Alexandria when the social scales tipped in favor of the Christians and against the Romans. This complex narrative tackles both emotions and ideas, making for a movie that has a solid plot but that is also about something. Excellent performances joined with well-crafted sets and costumes make for an altogether excellent period piece, and some smartly done DVD extras make for a great overall package. 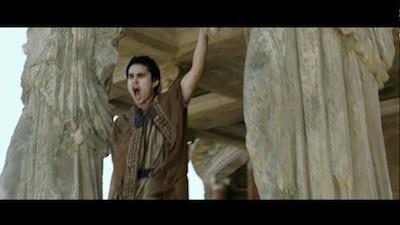