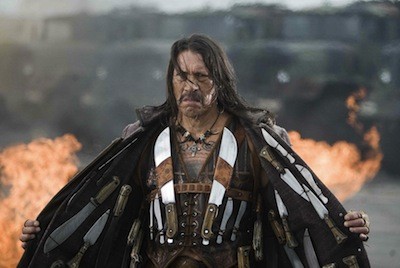 Machete, the latest violent romp from schlockmeister Robert Rodriguez, could easily be the most crowd-pleasing movie of the year. Which isn't to say everyone will like it--I was pretty blah on it myself, and think it's going to be better at home than for an expensive ticket price--but if you've seen the trailers for the movie and think it looks hardcore awesome, then I have a feeling Machete is everything you want it to be.

The hero of the picture is the man who gave it its title: Machete, as played by action mainstay Danny Trejo (most recently seen in Predators). As we learn in the extremely bloody opening sequence, Machete was a Mexican police officer who could not be bought, and so his family was killed by drug kingpin Torrez (played by Steven Seagal and the worst Mexican accent you've ever heard). Torrez also tried to off Machete, but the killing machine got away and disappeared.

He emerges three years later in Texas amidst a heated debate over illegal immigration. Senator John McLaughlin (Robert De Niro) is running for reelection on an extreme anti-immigration ticket. A local businessman by the name of Booth (Jeff Fahey) picks up Machete after seeing him in a street fight. He offers him $150,000 to kill McLaughlin, claiming that the expulsion of all the illegal labor would cripple the economy. It's a frame job, though; Booth is McLaughlin's campaign manager, and he wants to pin a failed assassination on a Mexican and make the Senator a hero. It works, and Machete is on the run, cutting a path of destruction through the Southland.

There is more to the Machete story. There is an army of border patrolling vigilantes led by Don Johnson, a literal network of people facilitating border crossings led by Michelle Rodriguez and the redhead from Spy Kids, and an investigation into both spearheaded by Jessica Alba, the wimpiest immigration officer around. It's all connected, though not necessarily in ways that are explained or make a ton of sense. Unlike, say, The Expendables, where the rivers of blood were interrupted by useless story, Robert Rodriguez and his cousin Alvaro deliver a script that doesn't worry about explaining itself or pesky things like internal logic. It's not like anyone came to Machete for a complicated plot. Sure, there is some none-too-subtle and all-too timely political commentary, but it never gets in the way of the next severed limb.

It's all pretty entertaining, even if it's not really very good. Machete began life as a fake trailer made as part of the Grindhouse film and essentially is a two-minute joke expanded to an overlong 105 minutes--the sort of thing SNL movies are often criticized for. It's a fair comparison, especially once you realize that Machete is not intended to be a funny action movie, but instead is just an out-and-out comedy. MacGruber covered some of the same territory earlier this summer and is the funnier film. Steven Seagal's performance here is kind of sad when you consider how much better Val Kilmer played him just a couple of months ago. In comedy, timing is everything. 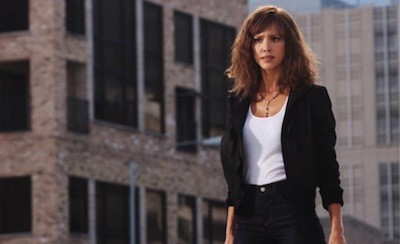 Machete is similar in style and tone to Planet Terror, Rodriguez's half of Grindhouse. He even uses the same beat-up film print effect, a gag that's more worn than the image is intended to be. I have much the same problem with this film as I did Planet Terror. It's fine for what it is, but it's not much more than that. Listen, I know the joke is that the movie is supposed to be bad, but Rodriguez and co-director Ethan Maniquis, who has been the effects supervisor on some of his other films, walk a fine line between being intentionally bad and honestly bad. Some of the direction and the acting is so poor, it's hard to tell if they are kidding. Are Jessica Alba and Lindsay Lohan in on the joke, or do they just have no idea how to deliver their lines? It's impossible to decipher.

And who cares? All of my complaining is essentially pointless. Robert Rodriguez knows exactly what his audience wants, and as I said, he totally delivers. I've had mixed feelings about most of his films, so I'm not really part of that audience, anyway. I have no problem admitting that. I give him a fair shake each time, but he never wows me. He does, however, keep me entertained, so I can never dismiss his efforts completely. Machete is everything it promises to be. If you have specific expectations of it, good or bad, then you will probably get exactly what you're hoping for. I expected to have fun, and I had fun, and I suspect you will, too. I think I would have had more fun at home with a couple of cocktails, but then, when don't I?