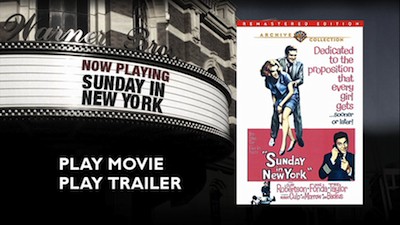 The 1963 film Sunday in New York is a tepid sex comedy that revolves around the lack of sex. Specifically, the virtue of Eileen. Played by a young Jane Fonda, Eileen is a virgin from Albany fed up with all of her relationships eventually veering toward the bedroom. Afraid that her relationship with a handsome heir to a big fortune (Robert Culp) will go south due to her inexperience, she travels to New York to get some advice from her big brother. Adam (Cliff Robertson) is an airline pilot and a ladies man himself, though he lies to baby sis about this, as that is what an older brother does--protects his sibling from guys like him.

Eileen's unexpected trip immediately throws lives into chaos. Adam is home on this particular Sunday and hoping to make time with Mona (Jo Morrow), though he is also "on call" and may be summoned to take flight at any time. With Eileen in the apartment, Adam and Mona must seek another bedroom in which to pitch woo, and when that wholly expected call comes from the airline, Eileen goes in search of her brother so he won't lose his job. On the bus to Rockefeller Center (Adam and Mona claim to be going ice skating), Eileen runs into Mike (Rod Taylor), a writer in the city for the day to chase some tail of his own. He flirts with Eileen, she ditches him, and he finds her again. It's fate, so naturally Eileen surrenders, only for Mike to back out when he discovers she's a "vi--beginner." That's as close as they get to saying the word "virgin," as 1963 were virginal times themselves (apparently). Anyway, as the two argue over this sudden bout of morality, the handsome heir arrives to propose marriage. The smitten gentleman assumes the man in the bathrobe to be his soon-to-be fiancée's brother, and since no other story comes to mind, the surprised pair go with that story. Then Adam comes home for real, etc.

Sunday in New York is predictable fare. Perhaps it was scandalous in an era that preceded the many seasons of "Three's Company" that would eventually follow, but it's pretty tame now. It was written by Norman Krasna, who also wrote the Cary Grant/Ingrid Bergman romantic comedy Indiscreet and the altogether pure-as-the-driven-snow White Christmas. The director is Peter Tewksbury, who gave America the wholesomeness of many episodes of "My Three Sons" and "Father Knows Best." He would also soon help Elvis wrestle with The Trouble with Girls. These two talented men aren't really the right ones for the job here. While temporal context allows us to forgive the need for discretion and innuendo, it's hard to look past the fact that Sunday in New York is neither very energetic nor very funny. It's a slow-moving 105 minutes, without enough pizzazz or histrionics to be labeled a farce and far too conventional to be seen as a progressive dissection of social mores.

Both Taylor and Robertson were accomplished actors when Sunday in New York was made, and both appear to know they are in a dud. Taylor comes off as bored, and Robertson is just going through the motions. Even when they are doing slapstick, the effort is half-hearted. Fonda, however, had only made a handful of films by this point, and she gives it her all. She is sexy and dedicated and though not altogether convincing as a prude, it's all right since she really does give it an honest try. Culp is also memorable as the fiancé. He comes into the picture like a power surge, and the others look all the more pallid next to his vivacity.

It's hard to entirely dislike Sunday in New York, it is at least jovial in its own way. It's also beautifully photographed, including wonderful shots of the Big Apple as it was back then. (It was lensed by Leo Tover, who also photographed The Day the Earth Stood Still and the John Wayne vehicle The Conqueror, among many others.) That's probably not enough to encourage the casual viewer to go through the trouble of seeking out Sunday in New York on DVD. You can pretty much guess how the movie is going to turn out just by reading what I've written here, and given that it's not all that fun getting there on the film's own terms, you're probably better off saving the effort for something more exciting. 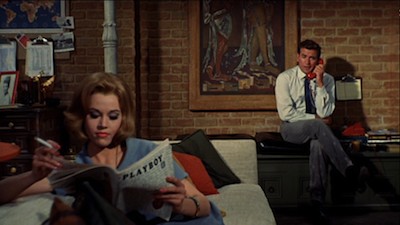 Video:
Sunday in New York is part of the Warner Bros. Archives, and so it comes as a burn-on-demand blue-backed disc. Though it is billed as a "remastered edition," the picture quality is fairly low. The colors have a nice pastel flavor, but there is a lot of digital noise, making for a hazy image surface. There is also a lot of spotting and scratches on the source material. It's not terrible, it's totally clear and watchable, but given that the photography is one of the movie's only selling points, disappointing.

Sound:
The original soundtrack is mixed in mono, and it's got a lot of tinny qualities. The overbearing soundtrack by Peter Nero, in particular, leans toward the metallic. Dialogue is clear and there are no dropouts.

Extras:
Only a theatrical trailer.

FINAL THOUGHTS:
I suggest that you Skip It, though with no particular vehemence or malice. Sunday in New York is an okay film, the kind of thing you might have stumbled across on TV late in the night or on a rainy afternoon and been fine with it just to pass the time. It's not really the type of thing one seeks out special, not even with the participation of a young, gorgeous Jane Fonda. In fact, she proves it's hard to be sexy in a sex comedy that isn't. This is a lot of going through the motions in terms of original production and also DVD production. Everyone involved has done better. 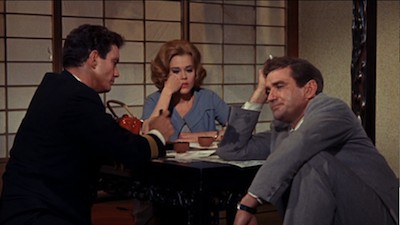