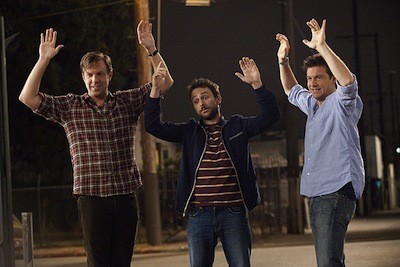 Horrible Bosses is a movie that gives you most of what you need to know up front. Three friends each have an employer that is making their lives miserable. One night after a particularly bad day and a few too many drinks, they share their fantasy of killing those employers. Their lives would be better with those three people gone, right? In one case, the dude's death would even save other folks' lives. That is the stuff of a great crime story; the fact that the buddies are all idiots and they choose to kill each other's bosses a la Strangers on a Train--or more importantly, Throw Momma From the Train--is the stuff of great comedy.

The three would-be killers are Jason Bateman (Arrested Development), Charlie Day (It's Always Sunny in Philadelphia), and Jason Sudeikis (SNL). Bateman's character Nick works for Kevin Spacey, who is doing a variation on his Swimming with Sharks douchebag routine. Spacey humiliates his underling and sandbags his promotion. Meanwhile, Kurt (Sudeikis) loses his way when his company's beloved owner (Donald Sutherland) has a heart attack, leaving the business in the dead-end care of his cocaine-addicted son (Colin Farrell in a balding wig and fat suit). That son is ready to bleed the place dry, including dumping toxic waste where it shouldn't be dumped (hence, the aforementioned danger to the lives of others). 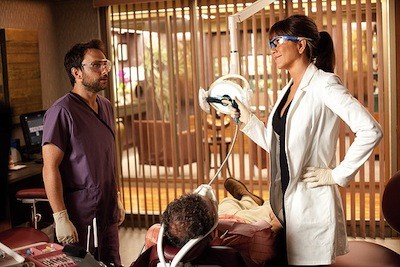 Finally, Charlie Day is Dale, a meek dental assistant whose boss (Jennifer Aniston) keeps trying to get in his pants. If Dale doesn't give in, she will tell his fiancée. This isn't nearly so terrible as the other guys' problems--something they rib him about--but the explanation for why Dale won't just quit is too funny to spoil and gives Horrible Bosses one of its best running gags. This more ludicrous scenario also works because, as It's Always Sunny fans know, Charlie Day provides the wild card. His squeaky energy gives Horrible Bosses a lot of its juice. He can take an average line and give it just the right spin to turn it into an hilarious joke. In fact, for as funny as Horrible Bosses is--the script is by Michael Markowitz and the team of John Frances Daley and Jonathan M. Goldstein--I often felt that the writing wasn't inherently funny, it was simply being sold by three exceptional comic actors. Day, Bateman, and Sudeikis transcend the material, and the glee that radiates from Horrible Bosses is sourced from their likability. It doesn't matter what they do, you're just going to like watching them do it together.

That's not intended to denigrate any of the other work in Horrible Bosses, either. Top to bottom, everyone involved is operating at an extremely impressive skill level. Director Seth Gordon (King of Kong, Four Christmases) knows where his shots and the best takes are and he goes after each, letting his performers roam when necessary and pulling them back when he needs to keep the movie going. The plot is luxuriously paced for a comedy, it never feels like the story is getting rushed to make room for more gags. The creators don't shy away from the darkness inherent in the scenario, either. Horrible Bosses is a black comedy, and it's regularly quite raunchy. Charlie Day may be the MVP of the film, but he couldn't do it without the offside support of Aniston. She is wickedly funny as the randy dentist, and though the role is small, it proves she's more concerned with the integrity of the jokes than her image. (Her expression provides the best and least flattering freeze frame in the closing credits.) Same with Farrell. Most of his fans won't even recognize him, though others might see his hopped-up scumbag as some through-the-looking-glass version of the actor's bad boy reputation.

Before the movie, a colleague and I were talking about how The Zookeeper was screening at the exact same time, literally across the street at a neighbouring theatre. Excepting any obvious aesthetic differences, there was some consideration given to how we chose which of the two films to go to. Our consensus was that The Zookeeper didn't really need a review: if you see the trailer and think it looks like a gas, it is probably exactly what you hope it to be. It's that kind of film. Horrible Bosses, on the other hand, could have gone either way. All the funny bits could have been in the previews, and the film itself could have lacked the requisite balls to pull off the premise. By choosing as I did, I can report that you need have no such worries. Horrible Bosses is really quite funny, and though not on par with Bridesmaids, it's so far the one comedy to follow it this summer that has delivered anything close to the same level of laughs. 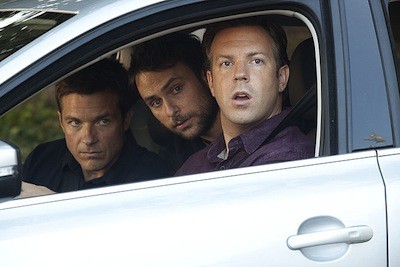