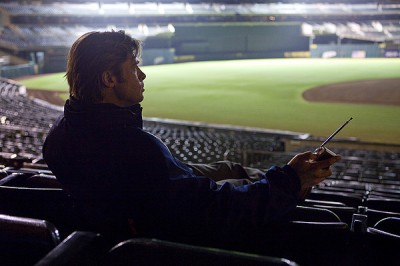 Moneyball is a baseball story. It's the back room tale of the Oakland A's historic 2002 season when the team's general manager, Billy Beane, defied the odds and led the franchise through a record-breaking cycle. Like the best sports pictures, it celebrates the victories and the losses; what is different about it is also what was different about Beane. It ignores the romance of the field in favor of the number crunching. There's drama in math. Who'd have thunk it?

Brad Pitt leads the cast playing Beane, a former player himself, but one who failed to live up to his initial promise. Following a near-miss season and faced with his almost-championship line-up being gutted by more solvent ball clubs, Beane has to rebuild the A's and do it with virtually no budget. By happenstance, he meets Peter Brand (Superbad's Jonah Hill, cast against type), a Yale graduate with a degree in economics working for the Cleveland Indians. Peter believes in a much-derided philosophy that values picking players for their statistical results rather than showboating, which gives Beane license to pursue affordable athletes the establishment has branded no-hopers. It's poetic justice of a kind: Peter is a baseball misfit rescuing other baseball misfits. A pitcher that throws funny, a catcher with a damaged elbow, a superstar past his prime--all have a spot on the A's line-up. It's also the second chance Beane never got on the diamond. 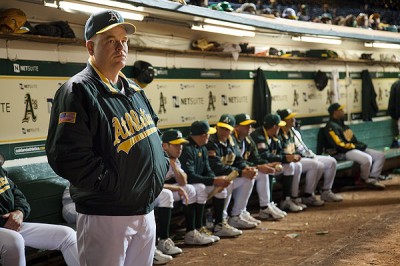 The crucial battle in Moneyball isn't how the A's fare against their opponents. Sports fans likely already know how that turned out (though I didn't, so admittedly, there is an extra "what if?" factor for the layman viewer). No, the main conflict happens in the administrative offices and between Beane and his support staff. Most notably, Philip Seymour Hoffman turns in an Oscar-worthy supporting performance as the coach in the dugout, stubbornly butting heads with Beane, dissatisfied across the board with the deal he's been handed. Hoffman's contempt, spoken and unspoken, is positively flammable. The script, which is by a championship duo all its own--Steven Zaillian took the big prize for writing Schindler's List, and Aaron Sorkin for The Social Network (both work here from a book by Michael Lewis)--elegantly weaves in public and private perception of the power plays, using sports radio and televised commentary to provide the outside perspective. On a similar tack, they also give us flashbacks to Beane's failed career as a player (newcomer Reed Thompson fills in as the younger version of Pitt). We get just enough to know what went wrong before and how that motivates him now.

Moneyball ended up being directed by Capote's Bennett Miller after Steven Soderbergh got fired just before cameras rolled, allegedly over Zaillian's labyrinthine screenplay. I guess Soderbergh's misfortune is kind of lucky for us, since he went on to direct Contagion and now we have that film and Moneyball both. Miller more than ably takes over. His Moneyball is still complex, but it's also dry and serious in tone. The shooting style is deceptively unremarkable. The camera rarely calls attention to itself, instead content to quietly hang around and observe. Really, that seems to be the credo of the movie in general. Despite the script aggressively pushing for Brad Pitt to step into the hero role, he plays Beane as more pensive and concerned. He is practically a caricature in the workplace, a trait that one of his players, David Justice (Stephen Bishop), calls him out for in one of Moneyball's more memorable scenes. The only time Beane is allowed to be human and let his guard down is when he is with his daughter (Kathryn Morris). Pitt plays these moments just right, tender like a father, but still with a hint of the coach's instructional authority. (Robin Wright Penn takes a surprisingly small role as Beane's ex-wife, and director Spike Jonze has a cameo for the trainspotters playing her new husband.)

Jonah Hill is also really good in Moneyball, but even more than Pitt, his part is mainly to be quiet and give meaningful, worried looks. It's interesting, because Peter Brand seemingly would have the most to gain from the A's having a winning season, but part of the movie's dramatic strength comes from the fact that the gulf in age between him and Beane means he isn't really clear of all he stands to lose. Audiences may find similar confusion in regards to how they expect Moneyball to play out. History being what it is, it can only go how it's going to go. Still, even that sticks to Moneyball's overall ethos. It's not how the teamed performed, but how that year transformed the guys pulling the strings, and maybe the sport, as well. The last scenes are perhaps a little tidy and some of the writing could be called narrative grandstanding, but hell, the filmmakers earned it. A winning streak like the one they had leading up to this otherwise satisfying home stretch had to buy them something. 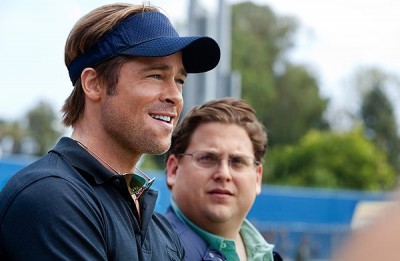