Please Note: The images used here are promotional stills not taken directly from the Blu-Ray. 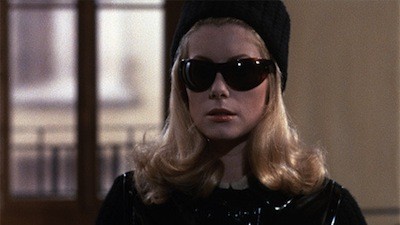 Luis Buñuel's 1967 adaptation of the Joseph Kessel novel Belle de Jour may be tame by today's standards in terms of what we actually see on screen, but the icy tale of sexual peccadilloes and alternative pleasures still has a psychological resonance, bolstered by the director's casual acceptance of fantasy as a means for expression. It's one of Buñuel's best films, as well as one of the most ideal roles for its beautiful lead actress, Catherine Deneuve. The star of Repulsion and The Umbrellas of Cherbourg (and of more recent films like Apres Lui) has often been criticized for her chilly demeanor, but a smart director like Buñuel can take what others see as faults and turn it into a performer's greatest strength.

Deneuve stars in the film as Séverine, a 23-year-old newlywed who, despite having been married to the handsome doctor Pierre (Jean Sorel) for a year, has not yet consummated her marriage. The couple sleeps in separate beds, like the marrieds of a 1950s sitcom, and Pierre's attempts to cross the transom between are met with dismissal. You'd think the dirty dreams Séverine is having would otherwise stimulate her underwhelming libido, but as we see, these fantasies all involve some kind of degradation or violence. One such dream is Belle de Jour's opening scene, and in it, an angry Pierre has Séverine whipped by coachmen before handing her over to one of them to do what he will. Even if Pierre knew about his wife's hidden desires, it's hard to imagine he could do anything about them, he's too upstanding a citizen. Then again, if he knew that all of her fantasies somehow referenced cats, he could maybe buy a few kitties for the apartment. You know, meet his wife halfway. 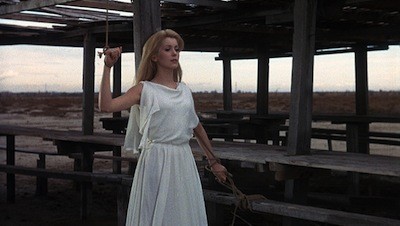 What follows is Séverine's measured acceptance of her new lifestyle. She resists her first client, but he wants her to assume control, and that's not her thing. Her actual first customer (and by some implication, her first sexual partner) is a Japanese man with some kind of bizarre device that buzzes like a bee. It's hidden in an ornate box, and for all the things that censorship standards wouldn't let us see in Belle de Jour, Buñuel scores by playing on our imagination. I am sure everyone watching has some ideas about what the man has brought with him--though, the other prostitute's refusal to go with him might erase any innocuous interpretations. Whatever it is, it liberates Séverine, and she soon accepts her new job in full, going so far as to fall for one of her regular customers, a young criminal with a golden grill. Marcel (Pierre Clémenti, The Leopard) is just the kind of uncaring bastard Séverine has been seeking. It's only natural, then, that when he starts to care--albeit in his own way--the whole arrangement starts to unspool, and Séverine's life unspools with it.

With Belle de Jour, Luis Buñuel has given us a glimpse into a seedy world, but by virtue of how he shows it to us, it doesn't seem seedy at all. Rather, once Séverine is inside, the landscape changes and this secret society becomes normal. Within the walls of the brothel, her passions are just as accepted as any other. It's only when the internal business goes outside, or someone from the outside comes crashing in--such as when Séverine's alter ego is discovered by Husson, who is played to sleazeball perfection by Piccoli, even down to the man's bruised ego--that any question of the morality of Séverine's sexual adventure is ever raised. The threat of exposure could undermine everything. (Though, it may be worth noting that the one perversion dismissed is anything having to do with underage girls; Buñuel rightly gauges his audience's comfort zone. Also, this lends weight to the brief flashbacks to his heroine's own childhood, when she was abused herself.)

Belle de Jour is less about sex, anyway, and more about the notion of double lives and the difficulties that come with not being able to express who we are. Deneuve is quite affecting as Séverine, a woman trapped by her own fear and the social mores that give them foundation. She is bottled up, and it shows in her demeanor, how she stands, where she casts her eyes. As the movie progresses, and particularly after her time with Marcel, the actress shows Séverine warming up, becoming happy, and becoming surer of herself. This makes it all the more sad and, honestly, scary when it threatens to all come crashing down.

Video:
Criterion's 1080p Blu-Ray transfer is encoded with MPEG-4 AVC and presented at a 1.67:1 widescreen aspect ratio. The quality of the transfer is quite lovely, with a fine level of detail and well-rendered colors. Luis Buñuel and director of photography Sacha Vierny have created an aristocratic look for Belle de Jour, with softly rendered backgrounds and a color scheme that resembles old paintings. This comes across nicely on the new high definition upgrade, particularly with the soft grain that permeates the whole presentation. You will still notice minor print damage remaining, some slight scratches on the image at times, but these are rare occurrences and the image quality far surpasses previous North American DVD releases.

Sound:
The uncompressed mono soundtrack offers a clean presentation of the original French audio. Though there are understandably no shifting speaker effects, the volume levels are strong and there is no hiss or any other glitches.

The optional English subtitles read well and are evenly paced.

Those who, for some reason, cherish the English dub will need to hold on to their old DVD. It is missing-in-action here.

Extras:
Once again, Criterion has enlisted artist David Downton to provide covers for one of their releases (he has previously contributed to their Max Ophuls library), and the results are stunning. He has done new artwork for the front cover and the cover of the interior booklet. The book also has a new essay by Melissa Anderson and a vintage interview with Luis Buñuel. 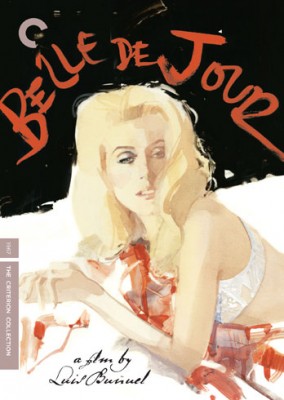 The supplemental section is led by an audio commentary with author Michael Wood (new to this disc; Miramax's disc had a commentary by Julie Jones). Wood digs into the many layers of the story, examining its use of taboo and dreams and how Belle de Jour fits into Buñuel's larger body of work.

The twenty-minute documentary "That Obscure Source of Desire" features sexual activist Susie Bright and film scholar Linda Williams discussing the psychology of the Séverine construct and exploring the nuance of how she is portrayed on screen. A new ten-minute interview with screenwriter Jean-Claude Carrière further delves into the origins of the material and the writer's working relationship with Buñuel. Carrière also figures in the short 1966 segment from the French television show Cinema, which features interviews with him and Catherine Deneuve.

All extras are in high-definition.