Incident In An Alley 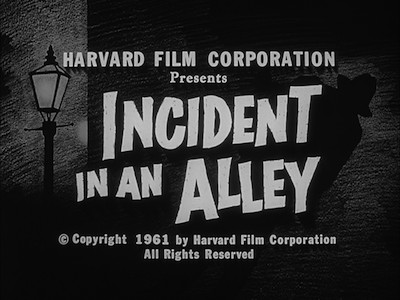 Incident in an Alley is a tightly made independent film from the start of the 1960s that, despite its adherence to fairly straightforward genre construction (or perhaps because of it), is entirely forgettable. Directed by B-movie stalwart Robert E. Kent (It! The Terror from Beyond Space) and based on a short story by The Twilight Zone's Rod Serling, the movie details a fairly standard police story, following one cop's crises after a bad night on the beat.

Officer Bill Jody (Chris Warfield) and his partner are out looking for a gang of thieves who robbed a music store when Jody happens on a panicked kid in an alley. The cop shoots the boy in the back when he tries to flee, but as the dust settles, the justification for the killing is questioned. Bill goes on trial and is exonerated, but he can't live with his own lingering questions about the evening and the public scorn it caused. When the woman who owned the music store dies from injuries incurred during the robbery, Jody rejoins the case to solve the theft. If he can catch the crooks, he might find out once and for all what the dead boy was doing in that alley.

The structure here is pretty simple. Writers Harold Medford (The Damned Don't Cry) and Owen Harris (The Atomic Submarine) tackle Serling's story piece by piece. There is the killing, and then the trial, and then Jody on the case. In between, there is time for the cop to brood and to hash over things with his pretty blonde wife (Erin O'Donnell). Warfield is stiff backed and granite chinned, and he lunks his way though the bulk of the picture. His absence of personality gives the supporting cast more space to show off. O'Donnell is all earnest tears while Virginia Christine is all righteous anger and intense grief as the dead boy's mother. There is also an amusing aside with an hilarious Jim Canino slinging be-bop slang as a checkered-coat wearing jazz musician who bought a stolen clarinet. Dig that lingo, daddy-o!

The beatnik suspect reminded me a lot of similar caricatures popular on television police shows through the 1950s and 1960s, and when it comes down to it, Incident in an Alley would have probably been better off as the kind of hour-long drama that Serling made his name writing. Kent directs the film with an efficient journeyman's eye, but there is nothing distinguished at all about the style or the framing of the picture. He gets in, he does the job, and he gets out. Which most likely meant the film came in on budget and on time, but there is nothing memorable in the final result to prompt repeat viewings. Good for one go, and then go on to the next thing. 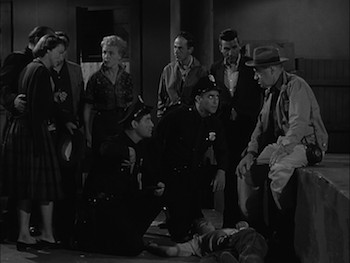 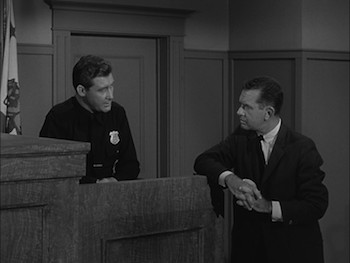 Video:
As part of MGM's Limited Edition Collection, a manufacture-on-demand program designed for lesser-known catalogue titles, Incident in an Alley wasn't subject to a major restoration or digital overhaul. That said, the existing black-and-white materials were in pretty decent shape. The full frame image is nicely rendered, with only minor scuffing and fair resolution. (The screengrabs look a little dark, but such was not the case on my television.)

Sound:
The mono soundtrack is unremarkable, but it serves its purpose. Volume levels are fine, and the dialogue is clear without any distortion.

FINAL THOUGHTS:
Incident in an Alley is an all right B-movie. It's fast and it's efficient, and the story about a cop shooting a young boy explores the questions surrounding the killing with a minimum of fuss. The performances and the direction are all okay enough, and everything fits in place nicely--which ultimately makes Incident in an Alley a mildly entertaining but insubstantial viewing experience. It's of some interest to fans of Rod Serling, who wrote the story that the film is adapted from, but casual viewers need not work too hard to get their hands on the disc. Rent It. 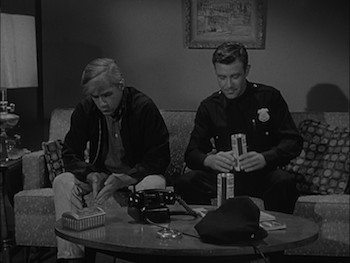 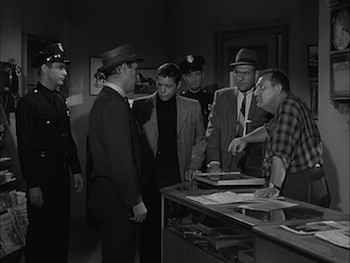