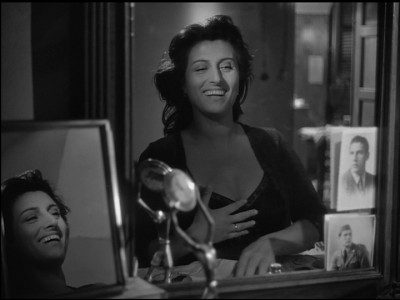 Like some Neorealist version of Mildred Pierce, the 1951 film Bellissima, the third feature by Italian director and master integrator of neorealism and melodrama Luchino Visconti (Senso, The Leopard), is about some intense mother love and sacrifice; it's heartbreaking and just a little scary, too. Visconti at one time played a similar off-and-on role to the one Almodovar has more recently come into since he inaugurated the "mature" phase of his career with The Flower of My Secret: a gay male auteur who makes unabashedly domestic, love/marriage/maternity-centered "women's films" in which a strong but vulnerable female protagonist takes the weight of the world onto her shoulders as a matter of course, and in which the fulfillment of emotional connection and desire is the prime motivator, and career matters or vanquishment of foes secondary. There's an extra layer to Bellissima, too: Since it takes place at the intersection of the show-biz dreams that have saturated the world since the early 20th century (and have made excellent thematic material for some great films, e.g., Sunset Boulevard and Mulholland Drive) and a mother's desire to see her child move up in the world by getting her into the movies, it has some evocative hints of filmmaking-related self-reflexivity marbled through its main substance of brazen, tear-eliciting hope and sorrow. 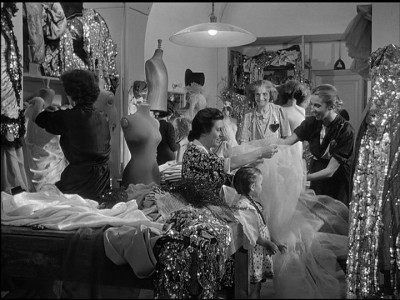 The legendary Anna Magnani (Mamma Roma, The Golden Coach) stars as Maddelena Cecconi, a working-class wife, mother, and part-time home-visit nurse whose tenement building happens to be on a block with an outdoor cinema, where she has fallen in love with the images of Monty Clift and Burt Lancaster projected onto a big screen visible from her struggling but proud little family's apartment window. The family also includes Maddelena's blue-collar husband, Spartaco (Gastone Renzelli), and the couple's five-year-old daughter, Maria (Tina Apicella). When we first meet her, Maddelena has brought little Maria to Rome's famed Cinecittà Studios for an open child-actor casting call; there, a young production assistant, Alberto (Walter Chiari), takes Maddelena and Maria under his wing, and this half-idle-whim visit to a bustling, important-feeling movie studio looks like it could lead to bigger, substantial things for Maddelena, a chance for her daughter and her family to get ahead. Maddelena is thereby drawn into a world that she can ill afford, either emotionally or financially--a world that, in its hypercompetitiveness, superficiality, and simultaneous child-unfriendliness and creepy, overscrutinizing focus on children, is less disturbing but ethically not so very different from that of the modern-day child beauty pageants we're all discomfitingly familiar with. 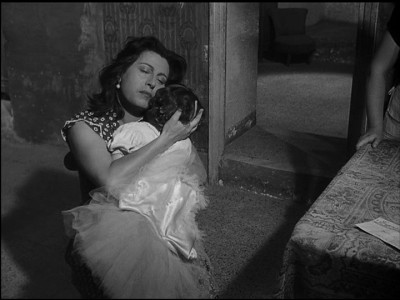 Alberto, though hardly pure evil, is little more than a seductive user whose genuine feelings have yet to develop any traction in his still-youthful callowness, and although Maddelena is nobody's fool and sees right through him, her feeling of being in alliance against the world with her daughter, whom she adores unconditionally and blindly, leads her to do whatever it takes (within certain limits; she is a devout Catholic, after all) to curry favor with Alberto and sweet-talk the hard-working Spartaco, who's dubious of any shortcuts to success whatsoever. She faces not only Alberto but a pushy, washed-up actress who insists on being Maria's acting coach; the gang of frantic, pushy stage mothers of which Maddelena now forms a part; snobbish, condescending dance teachers; and cranky portfolio photographers, all like a lioness (a mode in which Magnani is particularly good--tender and funny in well-balanced measures) who can growl or lash out as necessary. But Maddelena's one weak spot is her child, and when her eyes are finally, irrevocably open to the cruelty and hierarchy endemic to studio-system filmmaking (which is given some lingering looks spotlighting its ruthless efficiency, need for speed, exclusivity, and mutual backscratching in a way that's less bilious than pragmatically critical), she has to question what way of living will really do right by her daughter and decide whether even an offer of a coveted part from a finicky director will make it worth subjecting her own precious, jealously protected offspring to it. 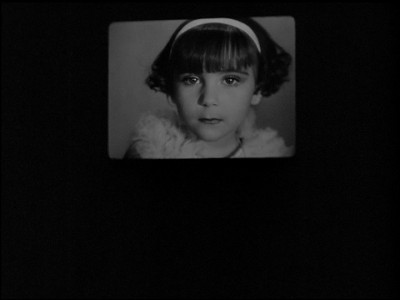 Visconti is probably the least "artifice"-averse of all those (Rossellini, de Sica, et al.) who have been rounded up under the Neorealist umbrella, and you can see, even at the early point in his career when he made Bellissima, the impressive ease with which he incorporates the on-location, natural-lighting approach mandated by the Neorealist aesthetic with a type of story, style of performance, and emotional sensibility that has less in common with Bicycle Thieves than Now, Voyager. More often than not, he was able to make this unlikely marriage of some seemingly disparate dramatic modes work, and that holds true, for the most part, in Bellissima, too. The grounded context provided by the hardscrabble mise-en-scène, along with Magnani's intuitiveness and force-of-nature physical presence, earn every one of the tear-soaked close-ups Visconti gives her; the deep and clear understanding of the pitch of the piece obviously shared by both director and star allows even what could seem contrived or overindulged moments of desperate emotionality to come across as effective and touching. 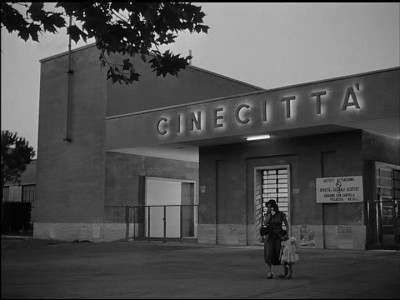 Despite the clear dramatic heightening of Bellissima's situations, feelings, and characters, the world captured by the camera--with its suggestively composed views of the cattle-call claustrophobia of the casting process, the workmanlike sterility of the Cinecittà dream factory, the intricate shopping and grooming procedures needed to turn a little girl into a viable candidate for movie star, and, especially, the very lived-in, crowded, noisy, working-class neighborhood the Cecconis inhabit--makes for a literally real environment, which aids both our suspension of disbelief and our ability to share the sadness of a mother's plight as she struggles to find a secure, prosperous place for her daughter amid all the messy, ìntractable reality surrounding them. (As one would expect, Visconti does splendid, sensuous mirror shots as well, which here serve to neatly and aptly evoke the split between the real world and the world manufactured for the screen--between, in essence, hope and disappointment--that lies at the heart of the film.) It's only common sense that there is a tension that exists between show-biz fantasy and the humdrum moment-by-moment of most people's lives, and any intelligent person could probably point it out. But not just anyone could spin that observation into such beautiful, emotionally expressive, and affecting dramatic gold as Visconti has here, and by its conclusion Bellissima has become yet another treasure to add to the now nicely robust pile of Visconti films available on DVD. 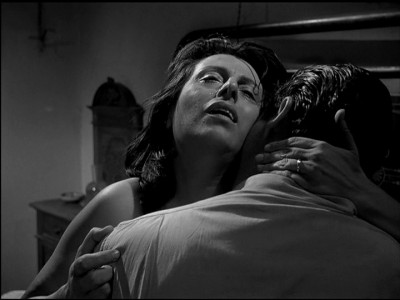 
The picture quality in this transfer of Bellissima (aspect ratio 1.33:1) represents a more or less fair trade-off: The picture is strikingly clear and minus any discernible artefacts (save for a tiny glimmer of aliasing on the credits and some in briefly seen horizontal blinds--a typical issue and not a big deal here), but some excessive noise reduction appears to have been applied, leading to many sequences that display a loss of cinematic celluloid texture (not a distraction, but definitely noticeable if you're a film-hound looking for the most genuine and authentic visual qualities of film). Overall, however, if those responsible have erred on the side of caution a bit in trying to get clarity of image, they haven't done a bad job at all, and the transfer is definitely up to a reasonable standard.


Aside from one moment late in the film where the sound momentarily drops out altogether for about a second (the appearance of a subtitle for the soundless moment confirms the error), the Dolby Digital 2.0 mono soundtrack is nicely solid, without noticeable scratches, buzz, or distortion, and definitely up to the sonic standards (with all the dialogue post-synched, as standard) of Italian cinema of the period.


A Neorealist melodrama directed by Luchino Visconti and starring Anna Magnani is bound to be bursting with emotion, and Bellissima certainly is that. The tears that inevitably well up are caused in this case by the unfulfilled desires of a strong-survivor mother whose one weakness, because it's what she wants most in the world, is a better, happier life for her child. The avenue she chooses to pursue that betterment, a career as a child actor for her little one, leads the film into the always tense, sorrowful territory of the disconnect between the dream-images--so resonant, moving, and "real"-seeming--of the movies and the inescapably drab-by-comparison quality of reality, even (and perhaps especially) when the reality in question is that of making those encapsulations/imitations of life; that's territory that Visconti is uniquely well-equipped, both dramatically and visually, to make an insightful, involving survey of. (On the broader philosophical plane, it's in the recalcitrant unwillingness of reality to conform to even our most beneficent, selfless wishes on behalf of those we love that Visconti has located the rich vein of dramatic conflict he taps so generously for us.) Though Bellissima does contain a few moments that come off a bit maudlin even by Visconti's very liberal, often near-operatic standards of emotional expressiveness, Magnani's powerhouse presence takes up any slack, and the film is by and large a tough-but-sweet gem that throws deep-seated maternal dedication and the innate insensitivities of the cinematic dream factory into the ring, simultaneously opening and moistening your eyes in the best Neorealist tradition. Recommended.