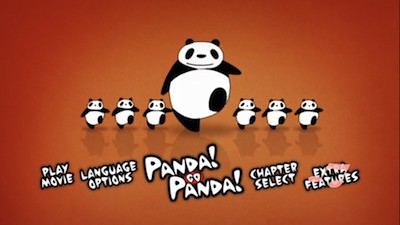 Panda! Go, Panda! is a short Japanese film made in 1972. The animated feature and its sequel, Rainy-Day Circus, are both cute, fluffy children's films, each running just over half-an-hour. They are most notable now as the early seeds of what would grow into Studio Ghibli, the most famous animation studio in Japan, who have given us such classics as Spirited Away and Kiki's Delivery Service. The Panda! Go, Panda! films were created and storyboarded by Hayao Miyazaki, Ghibli's mastermind, and they were directed by his long-term collaborator, Isao Takahata, best known for more serious films like Grave of the Fireflies and the vastly underrated Only Yesterday.

The stories are simple. In Panda! Go, Panda!, young Mimiko is left alone by her grandmother, and while the older woman is away, a daddy panda and a baby panda, Papa and Panny, show up at her house, having apparently just liberated themselves from a nearby zoo. The precocious orphan child decides that Papa can be her dad and she can by Panny's mommy and they begin playing house. At first, the discovery of bears living in her home freaks out her neighbors, but after some shenanigans, they accept the pandas into their community.

In Rainy-Day Circus, a tiger cub has escaped from a traveling sideshow and has hidden out in Mimiko's house. After an amusing parody of "Goldilocks and the Three Bears," Mimiko and Panny return the tiger to the circus, only to have a rainstorm flood the entire town and require Papa to help rescue the other animals as the circus train is carried away by the water.

These are fun films, though they definitely gear to a very young audience. Fans of Ghibli's more mature fair like Princess Mononoke may find this stuff a little slow (particularly Rainy-Day Circus); it's closer in tone to Ponyo. The animation is more crude than Miyazaki and Takahata's later work, and isn't even quite up to the level of Castle of Cagliostro; given the intent of the Panda! Go, Panda! movies, however, that doesn't really matter. The look of the animation is cute, with simple shapes and bright colors adding to the light tone. Papa actually resembles a much more famous Miyazaki creature, his big round shape being a precursor to Totoro. Likewise, Mimiko is like a prototype for the little girl characters that appear in many of Miyazaki's cartoons.

If you've got youngsters in your home, then Panda! Go, Panda! will definitely sit well with your other animated DVDs, and Miyazaki completists will be happy to see these two shorts back in print in North America. It's hard not to like these movies, they are adorable, but manage your expectations before hitting "play." 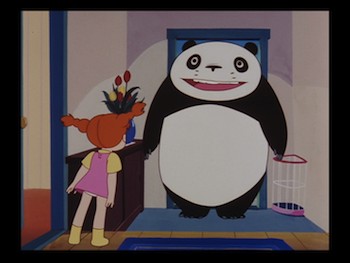 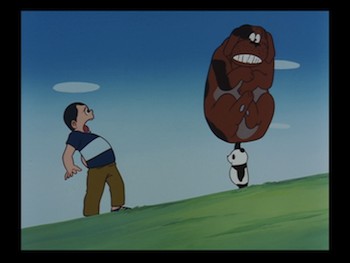 Video:
The new disc of Panda! Go, Panda! boasts a clean transfer, with nice colors and solid resolution. The cartoons have been preserved nicely, and the source material appears undamaged and vibrant. Aspect ratio is full frame, 1.33:1, as originally intended.

Sound:
Two stereo options are offered: the original Japanese language with subtitles and an English dub. The dub is actually really nicely done, with strong casting that doesn't overdo the cuteness and make it annoying for parents who might want to put Panda! Go, Panda! on in the background for the kids.

Extras:
Unlike the older Pioneer release, we actually get a couple of extras here. There is a 13-minute feature on a gallery exhibit showing the original Panda! Go, Panda! art and a nearly 40-minute interview with director Isao Takahata. Both of these are in Japanese with English subtitles.

There is also the original trailer for Panda! Go, Panda!, alongside trailers for other releases from the DVD distributor.

FINAL THOUGHTS:
Recommended. Panda! Go, Panda! is a cute early effort from Hayao Miyazaki and Isao Takahata. The two short cartoons about a young girl and her panda family are made for younger viewers, but are fun enough that most adults will like them, too--especially the Ghibli fans. Though not as good as My Neighbor Totoro, you can definitely see how these sweet little films eventually led the filmmakers to make that classic animated feature. 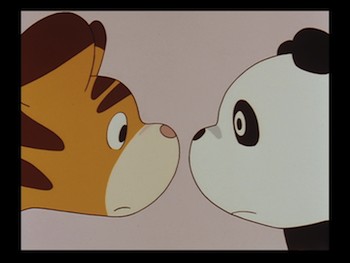 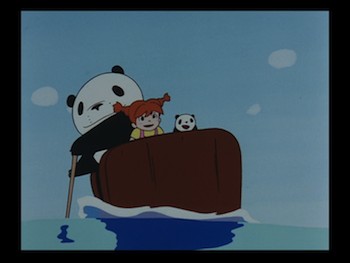