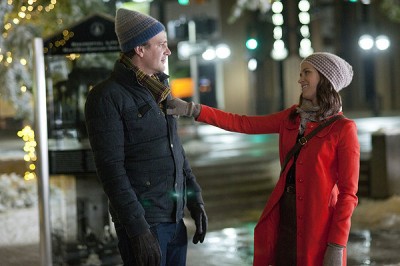 For those of you reading this that think the only song Dexy's Midnight Runners ever recorded was "Come On, Eileen," I want you to pay good, close attention to the song that plays at the very start of the new movie The Five-Year Engagement. That's Dexy's singing "Jacking Wilson Said." They have three great albums. You should familiarize yourself. Seriously.

And while I know it's weird to start a film review with a tangent like that, it's also kind of fitting. The Five-Year Engagement is a comedy full of tangents. Some of them are funny, others not as much. Some of it feels like killing time--the film is just over two hours long--while others fit the premise that this is a love affair that takes too long to get where it's going. Movie, heal thyself.

Despite how that sounds, The Five-Year Engagement is mostly good. It stars Jason Segel (The Muppets) as Tom and Emily Blunt (The Young Victoria) as Violet. They live in San Francisco, where he works as a chef. After the Dexy's fades out, Tom proposes to Violet. She accepts, and they start planning the ceremony. They even have an engagement party, where Tom's best friend Alex (Chris Pratt from Parks and Recreation) hooks up with Violet's sister Suzie (Alison Brie from Mad Men and Community). That unexpected relationship ends up moving faster than Tom and Violet's, especially after Violet gets accepted to grad school at a university in Michigan. Tom gets on board with the plan to move across country, giving up his own career so Violet can pursue hers. It's only supposed to be two years anyway.

As the title would suggest, this ends up being the hitch in The Five-Year Engagement. Or the lack of a hitch, as it were. The more the wedding gets postponed, the less it seems likely to happen. Tom gets a job at a sandwich shop in Michigan, but he's unfulfilled. Meanwhile, Violet is getting distracted by other things. The altar just keeps moving further and further away.

The Five-Year Engagement was co-written by Segel and director Nicholas Stoller. The pair previously teamed on Forgetting Sarah Marshall, another comedy about complicated relationships. Despite a feeling that Segel was tossing everything and the proverbial kitchen sink into the Sarah Marshall script, it worked because the raunchiness was funny and the sweet stuff pulled the right kind of heartstrings. The Five-Year Engagement does better with the latter element, especially in the first half hour and the last. Not coincidentally, that may be when the film is funniest, as well. Somewhere in the middle, things get a bit too heavy and the story starts to meander. In that dark spot, the audience loses sight of why these two were ever together in the first place. That's got it the wrong way around. We're supposed to remember, it's the characters who forget.

Thank goodness, then, for a fine cast of comedic actors. Even when The Five-Year Engagement gets draggy, the confidence and likability of its two stars keeps the film from completely sinking. Jason Segel has the good-guy routine down pat, and Emily Blunt is funny and neurotic and manages to make the two things work together without it seeming annoying. Both of them are so easy to watch, it might be a strong factor in why watching them fight is so hard to deal with. Though their arguments are written with an impressive candor, watching them endure such cruel truths was a bit much to bear. 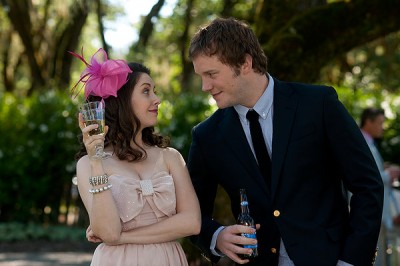 The rest of the ensemble is made up of amazing comedic actors, including Mindy Kaling, David Paymer, Rhys Ifans, Kevin Hart, Chris Parnell, and Brian Posehn. There is even a completely wasted cameo by Molly Shannon. (Was she just hanging around the set one day or something?) Just about all of them get a stand-out moment. Posehn maybe has the best "almost gonna barf" routine of anyone working in comedy today. As strong as all those people are, though, The Five-Year Engagement kind of belongs to Chris Pratt and Alison Brie. He plays an excellent screw-up, and she's really good at being uptight, and watching how that typecasting is mushed together so that they are covering both halves of the spread by the end may be the most true representation of what long-term, committed relationships are really like. It's worth the price of admission just to see Alison Brie try to give an engagement toast without crying and to later hear her impressive impersonation of a certain red puppet.

As I go back over my memories of The Five-Year Engagement and pondering what worked for me and what didn't, it could just be a case of needing to manage my expectations. I'm not finding much fault with what was there, but really with what I was anticipating would be. As an audience member, I walked in thinking I was going to watch a zippy comedy with an odd structure built on this extended prenuptial period; what I got was something a bit saggy in the middle, and a bit more serious, but that actually gets quite a few things right in attempting to portray complex adult relationships. There's a good chance that this one is a grower and my estimation of its qualities will improve as time passes. Check with me again in half a decade, perhaps? 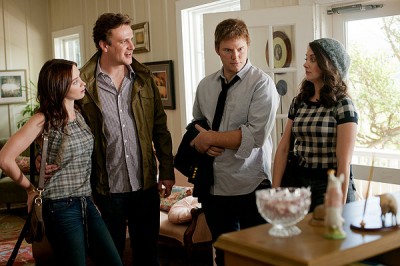