Paramount // Unrated // October 16, 2012
List Price: $36.98 [Buy now and save at Amazon]
Review by Stuart Galbraith IV | posted November 13, 2012 | E-mail the Author
Gunsmoke - The Sixth Season, Volume 2 (1961) marks the end of an era. The last episode of this set, "Colorado Sheriff," was also the very last half-hour Gunsmoke. Three-and-a-half months later, when the series returned for its seventh year, Gunsmoke had been expanded to one hour, to good and bad effect, a format maintained until its cancellation in 1975. There was a trend at this time expanding half-hour anthologies and other expensive shows into an hour format, presumably as way to cut down costs. Alfred Hitchcock Presents became The Alfred Hitchcock Hour in 1962, and The Twilight Zone expanded to an hour for its abbreviated fourth season, also during the 1962-63 season.*

I haven't seen enough of the hour Gunsmokes, especially the earliest ones, still in black and white and still co-starring Dennis Weaver, to rate them alongside the half-hour shows of seasons 1-6, but the taut Western dramas of Gunsmoke's early seasons are going to be hard to beat. (The hour shows will, however, thankfully provide this reviewer with something new to write about.) They far exceeded this reviewer's expectations, with only Have Gun - Will Travel boasting a similarly high caliber of writing and, less important to its overall success but still significant, direction and acting.

This volume includes the last 19 episodes of the 1960-61 season, when as the number 1 show in the Nielsen Ratings, for the fourth year running, Gunsmoke enjoyed a 37.3 rating, a figure unimaginable today. (For instance, the number 1 [scripted] show last season was NCIS, which had a 19.7 rating.) The 19 episodes are spread over three single-sided, dual-layered DVDs, and as always look great. Sponsor spots have been tossed in as an extra. 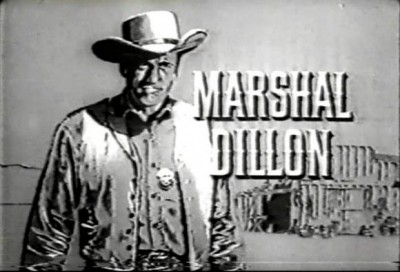 Gunsmoke was so popular during 1961-64 that CBS ran reruns of the half-hour Gunsmokes on Tuesday nights under the title "Marshal Dillon" so as not to confuse viewers with new, hour-long episodes.

More and more, Gunsmoke was also fast becoming a show content to focus entire episodes on the concerns of Doc, Chester, or Kitty, while others were primarily interested in one-off characters. In "Minnie," for instance, Doc is hotly pursued by an unrefined buffalo-skinner (prolific character actress Virginia Gregg in a plum role), allowing Chester and Matt the opportunity to tease Doc mercilessly. Conversely, Matt, Chester, and Doc are mostly on the sidelines during "Love Thy Neighbor," with two families resolved to decimate the other. That episode, the first of four Gunsmokes directed by Dennis Weaver (three in this set), features a typically impressive list of character stars. This episode, for instance, features Jeanette Nolan, Jack Elam, Harry Dean Stanton, Warren Oates, and Nora Marlowe.

That same episode also touts an original score by Jerry Goldsmith. Around this time, the networks were compelled to stop relying on their extensive stock music libraries and commission a certain percentage of original scores each season. The result of this is some spectacularly good television scores were written by the era's top composers. This set features original scores by Nathan Scott, Bernard Herrmann (twice), William Lava, Jerome Moross, Fred Steiner, Van Cleave, and Leonard Rosenman, most of whom were concurrently writing scores for Twilight Zone and other CBS shows. Herrmann's score for "Kitty Shot" is particularly haunting and impressive.

Writer John Meston is credited with writing or co-writing the 19 scripts, but some of the more interesting were chiefly or co-written by Wichita-born Kathleen Hite (1917-1989), a secretary at CBS Radio who rose through the ranks to become its first female staff writer, and who eventually penned dozens of TV Westerns and created the series Empire (1962-64), starring Richard Egan and Ryan O'Neal.

Gunsmoke looks exceptionally good on DVD. Shows are a bit overly grainy (especially during the opening titles, reworked slightly for syndication) but otherwise they're very sharp, very clean. The 19 black-and-white episodes are spread over three discs, with a total running time of about eight hours and 15 minutes. The Dolby Digital mono (English only) is clean and clear, and the shows include optional English SDH subtitles. The packaging allows viewers to read the episode descriptions inside the snap case without having to remove any of the discs.

Supplements this time include a modest sampling of sponsor spots.

Those curious as I am to compare these last half-hour Gunsmokes to the hour-long shows that immediately followed won't have to wait long. CBS DVD/Paramount have already announced Gunsmoke - The Seventh Seasons Volumes 1 and 2 for release on December 11, 2012 and February 5, 2013, respectively. In the meantime, The Sixth Season, Volume 2 comes Highly Recommended.

* Television historian Stephen Bowie notes, "The hour expansion wasn't confined to CBS. There were also Tales of Wells Fargo and The Detectives. [Not] really sure why this was a trend - with Gunsmoke it may have been greed for more of a big hit, but some of the other shows were on their last legs."