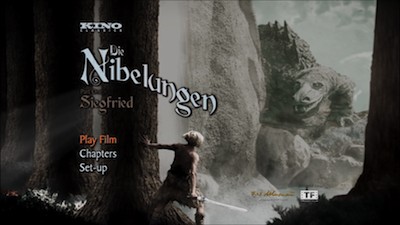 Or so the poster for Fritz Lang's gargantuan adaptation of the ancient German poem Die Nibelungen could have declared. The early work of Teutonic literature is most often said to have originated in the 16th Century, though apparently there is some evidence that the legend could date back to even 300 years prior to that. It is a big story, full of brave warriors, magic creatures, ferocious dragons, and shiny treasure. It ponders themes of love and honor, and the consequence of betraying both. It's as big in legend and scope as, say, the King Arthur stories, and equal in grandeur and likely an inspiration to Tolkien's epics. It's a tale that has been told and retold many times, including most famously, in an opera by Richard Wagner. Lang was the first to bring it to the silver screen.

And it took him two separate films to do it. Released back-to-back in 1924 and 1925, Siegfried and Kriemhild's Revenge in a way comprise two films, much in the same way there are two parts to Soderbergh's Che and two parts of the final Harry Potter film. As separate pieces of cinema, they work their own avenues, establishing an individual style and telling an individual story; put them together, however, and the sum total suddenly exceeds that of its parts. 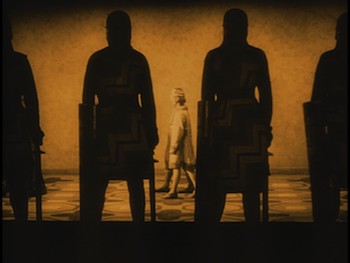 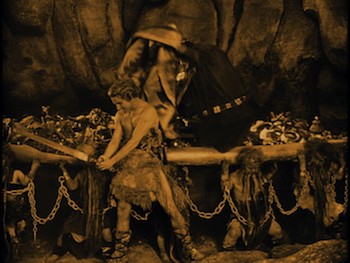 Part I is the fantasy adventure half. The titular Siegfried (Paul Richter, also in Lang's Dr. Mabuse: The Gambler) is a prince looking to prove his mettle. When he hears of an unscalable mountain castle in Worms, and of the beautiful Princess Kriemhild (Margarete Schön) who lives within its walls, he decides to go there and take her hand in marriage. Along the way, he slays a dragon and bathes in its blood, becoming invincible. Siegfried also stumbles into the hidden wilderness of the Nibelungen, where he bests the King of the Dwarves and takes his considerable treasure. So armed, he travels to Worms and appeals to King Gunther (Theodor Loos, who played Josaphat in Metropolis) for the right to marry his sister. Gunther has his eye on the warrior queen Brunhild (Hanna Ralph, from Murnau's Faust), but she will only marry a man who can defeat her in battle. Gunther strikes a deal with Siegfried: win him Brunhild, and that will earn him Kriemhild.

Though the plan works, largely thanks to magic and trickery, Brunhild suspects that she was duped, and once everyone is back in Worms, she begins to make trouble. Her machinations turn Gunther against Siegfried, and the King's main guard, Hagen Tronje (Hans Adalbert Schlettow), manipulates Kriemhild into revealing her husband's sole weakness, effectively ending the fairy tale romance.

Die Nibelungen: Siegfried does, in fact, have some fairy tale elements to it. The tone here is one of grand adventure, and Lang--working from a script by his wife, Thea von Harbou--fully embraces the fantasy. Working with massive sets and innovative special effects, the Austrian director creates a believable mythological world. His bag of tricks includes miniatures, animation, and good old-fashioned stagecraft. This includes building a full-size dragon that, though it looks like something that was stolen off of a parade float, is nevertheless impressive, spouting fire and oozing blood as the battle takes its turns. Lang also uses double-exposure and trick photography to enact his illusions, particularly in the scenes where Siegfried doubles for Gunther. One always assume movies of this age are going to be primitive and clunky, but not so for Die Nibelungen. It's bright and nimble and full of energy. 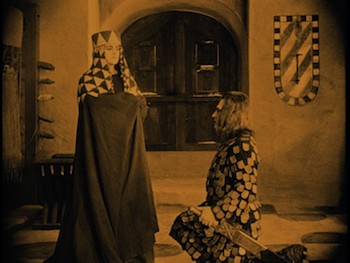 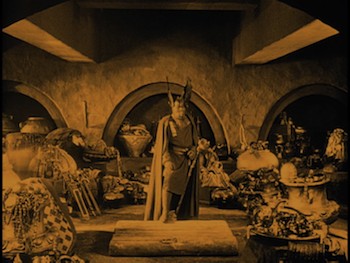 The tone immediately changes once we get to Die Nibelungen: Kriemhild's Revenge. It's like jumping from Tim Burton's Batman to Christopher Nolan's version all in the space of two movies. Here is quirky and magical, and now here is dark and heavy.

At the end of Siegfried, Kriemhild pleaded with her brother to give her Hagen Tronje's head in atonement for the murder of her husband. He refused, and so the Queen exiled herself within her family's own kingdom. She has become a dark presence in Worms, refusing to end her mourning until she has the vengeance she requires. Some time has passed, and the season has turned to winter. Gone is the sunny disposition that lit up the Nibelungen lands when Siegfried was alive; now it is cold and dark and everyone is dressed in the colors of death. When Attila the Hun (played by Mabuse himself, Rudolf Klein-Rogge, and known as Etzel in the text, it would seem) sends his emissary seeking to marry the beautiful Kriemhild, the widow sees her way out. She will leave her family and enlist her new husband in killing Hagen.

As the title would suggest, Kriemhild's revenge plot takes the focus in part II. The story takes place almost exclusively in the land of the Huns, and the entire back half of Kriemhild's Revenge is a bloody skirmish between the Queen's new alliance and her old one. It's in this sequence that the Germanic pride emerges, and why Lang's film was later seized upon by the Nazis, who tried to cast it in a propagandist light. Gunther's steadfast refusal to give up Hagen, particularly now that Easterners are involved, was seen as a tribute to the spirit and honor of the German people. Never mind that Gunther and Hagen are completely in the wrong, that they killed and robbed a man who was far more loyal and noble than they. At least they never gave up!

Attila's people live in far harsher conditions than the Nibelungens. His land is a desert, the landscape is rocky and hard. They wear clothes that match the terrain, adorned in fur and steel. It's a look similar to the one Orson Welles would adopt years later for his version of Macbeth. It's a barren kingdom for a barren Queen. Kriemhild thinks of nothing but revenge, she has no room for any emotion but anger. In Die Nibelungen's most effective scene, as they watch Attila's castle burn with their enemies inside, Attila tells his bride that even if she never loved him, they are now bound by hate. Margarete Schön plays the moment for all it's worth, responding with a near-orgasmic shudder: she has never had more love in her heart than she has right then.

While it would be easy to divide Die Nibelungen into separate portions, and while attention is generally focused on the more inviting first half, the truth is they make a better single picture than they do two separate pieces. Siegfried may be flashy, but Kriemhild's Revenge is no less impressive. Sure, there are no 60-foot dragons belching flame and smoke, but Lang directs a huge cast of extras, essentially sending two armies into a battle that rivals anything Peter Jackson has invented, and without computers to fill in the gaps. It's a great example of controlled chaos. The hordes converge on one another, but at the same time, their violence is pushing toward something, they are edging the losers toward their defeat.

Except there are no clear winners or losers when it comes down to it. Die Nibelungen is a classic tragedy, with no noble victor, no despicable loser. Everyone gets what they want in their own way, and they are punished for it. It's a bleak narrative, with no happy-ever-after denouement. Lang and von Harbou drop the curtain when the last Nibelungen body falls. No eulogy, no greater meaning. The deeds are done, the end. It's a devastating finish, resounding in its finality. Forget lowering the curtain, they've dropped the boom, and the impact is emotionally loud, unforgettable, and totally satisfying. 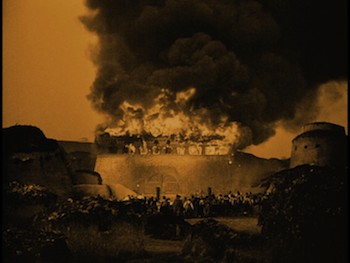 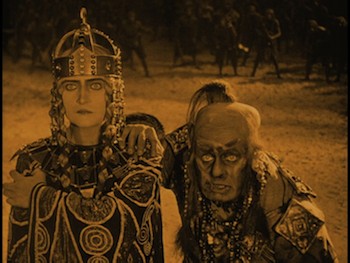 Video:
As with many films this old, Die Nibelungen has not been treated kindly over the years. Even films with a reputation this massive were not properly preserved, meaning that any true and complete negative is long gone. As title cards before each installment explain, the Friedrich-Wilhelm-Murnau-Stiftung organization undertook a massive restoration effort, compiling as complete a version as possible using every available source print. The result is remarkable. The cutting and pasting is not evident, the Die Nibelungen on this disc looks all of one piece. There are still scratches and marks here and there, and a few scenes are more worn than others, but the vast majority of the movie has been cleaned up spectacularly and looks amazing on disc. The image has been tinted to mirror Lang's original intention. The picture is mostly in sepia, but there are a few other tints, mostly growing lighter and darker to match the mood.

Sound:
Friedrich-Wilhelm-Murnau-Stiftung have also done their best to restore all the original German title cards, preserving the creative calligraphy, to recreate an authentic viewing experience. Any cards missing were rebuilt in the same style and are clearly marked. A new optional subtitled translation works nicely with the cards, timed so we have plenty of time to read them before moving on to the next scene.

In terms of music, Die Nibelungen had a score written for its initial run by composer Gottfried Huppertz. A recording of that is used here, and viewers have the choice between Dolby Digital 5.1 and 2.0 Stereo. The multichannel mix sounds grand, with strong volume and healthy tones. More importantly, in at least one moment in Siegfried, when the scene goes silent, it's really silent, and the lack of music has the appropriate impact.

Extras:
Kino has released Die Nibelungen as a two-disc set, one DVD for each movie, housed in one standard-sized case with an outer slipcover.

In terms of extras, the second DVD boasts a fascinating 68-minute documentary about the making of the movie and its legacy, including its troubled history and its eventual restoration.

There is also a short two-minute newsreel clip of Lang working on the set of Die Nibelungen.

FINAL THOUGHTS:
Highly Recommended. Epic filmmaking for an epic story. Fritz Lang's two-part adaptation of the legendary Die Nibelungen is a massive achievement. Split into two parts, it begins as a grand fantasy and ends as a dire tragedy. There are swordfights and dragons and feats of magic and treasures and death and betrayal and just about everything in between. Beautifully restored, this example of silent filmmaking at its finest can now be seen as never before, nearly complete, and cleaned up for the age of high-definition digital. Pop some popcorn and get settled, because you're about to go on a journey...! 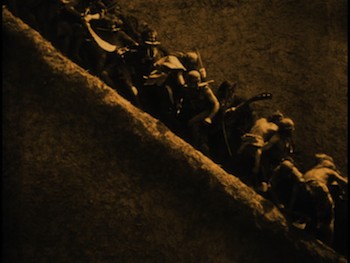 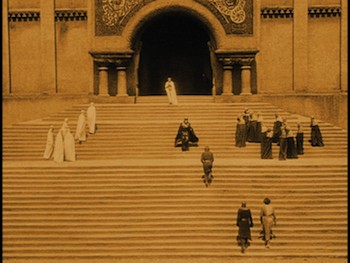