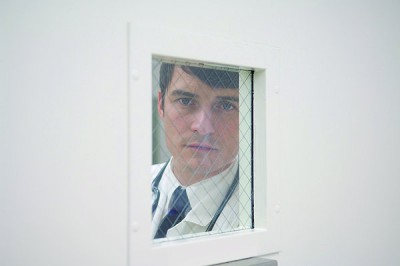 A doctor getting a god complex is a well-worn genre trope, explored in movies as far apart as Stanley Kramer's Not as a Stranger (1955) and the Alec Baldwin vehicle Malice (1995). With those movies, the story usually involves the docs overestimating their power to save lives and taking extraordinary measures to maintain their reputation. In The Good Doctor, a little-seen indie starring Orlando Bloom, the focus is far tighter. Instead of a doctor seeking to save the world, Bloom's Martin Blake tries to save just one girl. Or more to the point, prolong her illness long enough to keep her around and satisfy his obsession and loneliness.

Dr. Martin Blake is a first-year resident recently moved to California from England. He is finding the American medical bureaucracy hard to navigate, in no small part due to his being less outgoing and gregarious than his colleagues. He clashes with a nurse (Taraji P. Henson) who thinks he takes short cuts, and an orderly (Michael Pena) who is known to pop a pill and crack a crude joke. Martin feels he deserves a certain respect just for wearing a white coat. After a life-threatening mix-up with a patient's meds, he fears he is on tenuous ground, even though he insists he did nothing wrong. His supervisor (Northern Exposure's Rob Morrow) suggests maybe he should reconsider why he became a doctor in the first place.

This all puts Martin in a vulnerable place, and more than willing to accept the kind, albeit innocent, attention of the teenage girl put in his charge. Diane (Riley Keough, Magic Mike) is in the hospital due to a particularly strong infection. Over the few days he treats her, Martin becomes enamored of Diane, getting involved in her personal life, and also making connections with her family. Realizing that there is too great a distance between them when she is on her own, he contrives to have her return to the hospital and then goes to extraordinary measures to keep her there. Things spiral downhill, particularly once others begin to grow suspicious of his actions. 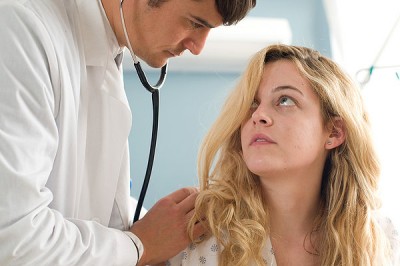 The Good Doctor is directed by Lance Daly, whose previous effort was the charming Irish drama Kisses. The script is by John Enbom, a writer with some impressive television credits on shows like Party Down and Veronica Mars. The two make a good match, with Daly's freeform Neorealist approach being tempered by Enbom's acute sense of story structure. Together they create a surprising drama, one that is about control giving way to reckless action. Martin Blake is a bit like an Edgar Allen Poe character, all buttoned-up, making the wrong choices, and coming undone as he does so. In fact, the movie only falters in its final 20 minutes, when it becomes a bit too much "The Tell-Tale Heart" and careens off course into far more conventional territory. Luckily, the pair pull everything back in the end, with an unnerving final shot that suggests that all of the events of The Good Doctor have only served to set up Martin to become exactly the kind of cliché egomaniac the film has otherwise avoided. Like this is the prequel, Orlando Bloom will grow up to be Alec Baldwin.

As an actor, I've never rated Orlando. I can't think of a single movie I've been impressed by him in. He's very good here, showing a surprising level of reserve, giving his character a complex inner life that emerges through behavior and action rather than dialogue. Much of this performance is reliant on the actor just "being" rather than "doing." The same goes for Riley Keough. She spends the entire movie in bed, and yet her character has several mini-dramas ripple through her life as she attempts to recover. Keough manages to make Diane come off as fully formed, rather than just being a plot construct in a hospital gown. On the other side of things, Henson, Morrow, and Pena all get to make their mark in far more vivacious supporting roles. Daly creates a clear divide: these people are living, while Blake is not. They are external, he is internal. Hell, even his chosen field tells us as much. More than once he is asked if he's a surgeon, and he corrects the person, explaining he's in "internal medicine." Fittingly, it's because he doesn't want to cut people up, he doesn't want to delve too deep. It's hard to say how much he really considers the implications or consequences of his actions with Diane. As a result, the film itself only lightly prods us to question them ourselves. There is a lot to ask here, many ethical and moral quandaries to ponder. Questions of age, privilege, and trust. Diane is by no means complicit in her treatment, and her own feelings about her doctor are ambiguous, and yet, don't we kind of feel drawn to her in the same way he is? Judging Blake may be more complicated than you'd think, and Daly lets us find our own way into these philosophical quagmire rather than pushing us.

Aesthetically, Daly and cinematographer Yaron Orbach (Our Idiot Brother) create an interesting amalgam of the usual medical drama sterility and the warmth of California sunshine. Despite having originally shot on 16mm, they transcend the usual look of a low-budget indie and establish a slick color scheme that plays off the different qualities of whiteness. Its purity can be both icy and hot, and it's telling that Blake's bare apartment comes off as more sterilized than even the hospital. Most of the film is framed deliberately, arranging the characters in their environments just so. As the situation becomes unhinged, so too does the camera, sometimes adopting a head-on vantage point, and once even rising above, almost as if resorting to CCTV footage, to create a visual distortion to match the doctor's panic. The external eye only increases the feeling of paranoia. Possibly more of this would have helped the last third of the film work a little better, creating a larger divide between us and Blake.

All in all, The Good Doctor is a well-made movie. Top to bottom, the construction is smart and each aspect well considered. It maybe lacks a certain x-factor that pushes it from being a good movie into being a great one, but that's okay. It delivers on its initial promises and manages to be thought-provoking at the same time. Its lack of flash is its main selling point, and really, the film's only flaws are when it tries to go bigger. Perhaps even more restraint was what was needed here, it's hard to say. Either way, The Good Doctor is good enough to warrant your time. 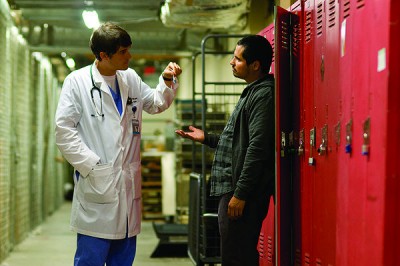 Video:
The 1080p high-definition transfer, AVC-encoded and framed at a 1.85:1 aspect ratio, looks excellent, with a nice surface gloss tempered by a lovely cinematic grain. Colors are rich, with good balance between the different lighting set-ups, between the harsher interiors of the hospital and the softer look of the outside world. Dark scenes have good blacks, with no crushing. Overall, I didn't see any evidence of enhancement or manipulation. It's a lovely Blu-Ray.

Sound:
The Good Doctor's English-language soundtrack has been mixed as a 5.1 DTS-HD Master Audio track, and it's also quite excellent. Most of its charms are subtle, choosing to dial down the ambient noise to create a more quiet atmosphere, one that encourages the viewer to listen closely, perhaps even from the edge of his or her seat. Dialogue is sharp and easy to hear, while music takes over at appropriate times, filling the room with sound.

English Closed Captioning is provided, as are Spanish subtitles.

Extras:
Just a couple of basic behind-the-scenes features, and they are basically interchangeable. At nearly ten minutes, "Making of The Good Doctor" is superficially more in depth than the five-minute "AXS TV: A Look at The Good Doctor," but you're really fine with either as far as these kinds of promotional items go.

FINAL THOUGHTS:
Kisses-director Lance Daly's latest feature The Good Doctor sees the filmmaker stepping away from the street-level verité of his impressive debut and crafting a tense, philosophically complex drama set in a California hospital. Orlando Bloom stars as a first-year resident walking an ethical tightrope and eventually falling off, jeopardizing the health of a teenaged girl (Riley Keough) he has become obsessed with. The narrative is smartly manicured, taking us through each step as the young doc steadily increases his poor choices and digs himself deeper into trouble. Though the film veers into some expected territory in the final stretch, The Good Doctor generally takes the least obvious route, choosing a quiet approach over exploitation. A well-done small movie deserving of some added attention. Recommended. 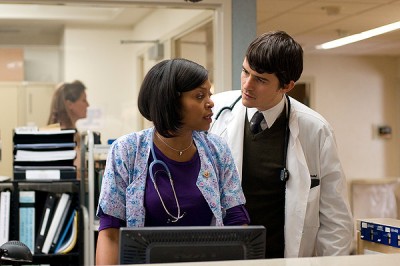