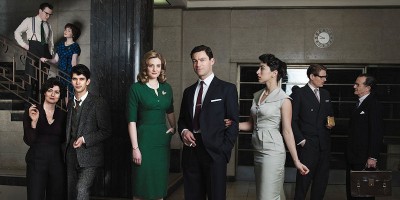 When I first watched The Hour sometime back, I actually thought it was a one-off. It seemed fairly self-contained and complete as a miniseries. So, I was pleasantly surprised to discover that it was getting a second season, which aired last year on BBC Two overseas and then on BBC America in recent months. Set in the late 1950s and centered around a news program that broadcasts live once a week, The Hour was a solid blend of mystery and romantic drama. The cast was excellent and the period detail well done without being too self-aware about it. The script was confident and smart, and much of the first six episodes was spent getting The Hour on its feet and preparing it to grow into something more self-assured.

Which would be The Hour 2, a second run of six one-hour programs from series creator Abi Morgan (Shame) and a team of writers and directors. In this sophomore go-around, the series has really hit its stride, creating a formula that, BBC willing, could have served to stay entertaining for a few more series to come, especially as the characters progressed through history. No such luck, however. As a Valentine's Day present, the powers that be cancelled any plans for a Series 3 just last week.

The main cast all returned for this second tour, including Ben Whishaw (Skyfall) as Freddie the idealist; Romola Garai (Atonement, Crimson Petal & the White) as Bel, the show's producer and Freddie's unrequited love; and Dominic West (The Wire) as Hector, the news anchor with a taste for drink and dames. It's been nine months since the previous season finale, pushing the narrative closer to 1958. Freddie has been absent all this time, and without his unyielding moral compass, success has bred complacency and a copycat news show on another network is nipping at The Hour's heels. Hector isn't helping matters by playing the diva, showing up drunk and usually late. He spends most of his time at a high-end strip club. A new producer (Peter Capaldi, In the Loop) is brought in to get things back in shape, and he also brings back Freddie.

None too soon, either. The inciting incident for the season is a dalliance gone bad. Hector spends a night with one of the dancing girls (Hannah Tointon), and she accuses him of the violent attack that follows. This both conflagrates the growing problems between Hector and his wife (Oona Chaplin) and exposes something dirtier going on at the nightclub. In their efforts to clear Hector's name, Bel and Freddie uncover a blackmail ring that has been using incriminating photos to influence the political landscape. The bad men's schemes to profit from the budding nuclear arms race dovetails nicely with the growing panic over the Cold War. The threat of atomic annihilation plays a big part in The Hour 2, sitting alongside racial politics as one of the important topics of the day.

The Hour 2 is a lively mix of all these elements. Like its predecessor, it functions as a kind of investigative soap opera. The lives of its main characters intertwine with the greater plot at large, and as they uncover the truth behind the news, their personal integrity and interpersonal relationships are tested. Any sexual tension between Hector and Bel is gone, but the unspoken feelings between her and Freddie continue to grow. They are even exacerbated by Freddie's new wife (Lizzie Brocheré), who sees the obsession her husband has with his job is not merely about the work. There aren't a ton of surprises to be had in how the plot unfolds--in fact, a lot of the developments are either obvious or just plain standard--but the cast is so good and the writing strong enough that The Hour grows increasingly entertaining as it progresses. This makes it all the more satisfying when Morgan brings everything together for the big finish, giving the characters not just a chance to do the right thing, but a chance that advances them as people. While the way the blackmail scheme comes together isn't really surprising, where some of the characters end up--and what they do--is.

There's a lot of potential left in The Hour. Each season could have explored new topics and had another timely story that threaded through that particular cycle, leading up to the final broadcast where the team breaks the big news. Alas, that is not to be. The Hour ends here. Luckily, though the finale doesn't wrap up in one nice bow, it doesn't really end on a cliffhanger either. While there could certainly be much conjecture about what happens next (and I am sure there is plenty of fan fiction already in progress), Morgan has moved all of her characters to definitive new positions, making it far less disastrous to have the rug pulled out so suddenly.

First Upstairs Downstairs and now The Hour: clearly I am not BBC America's core demographic. Sorry to be a jinx, everyone! I'll try not to like anything else they do. (Meaning you can breathe easy: Doctor Who will go on forever just to spite me.) 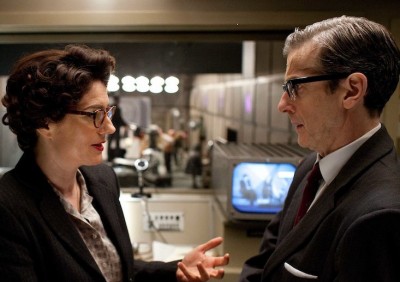 Video:
The 1080p widescreen presentation of The Hour is uniformly excellent, even improving over how the show looked the last time around. The colors and lighting are both vibrant and moody, sometimes simultaneously, and the Blu-Ray transfer slips easily between both aspects, giving us lovely hues in both light and dark scenes. Resolution is sharp with plenty of fine detail evident, avoiding any crushing, softness, or excessive grain.

All six episodes are spread across two discs. There is a play-all function, and also an individual episode selection. All the shows come with both the "previously on" and "next on" bumpers, the former of which I wish was easier to skip, but the chapter breaks don't fall immediately after.

Sound:
The DTS-HD 2.0 soundtrack stays fairly centered, but still works quite well. Dialogue is distinct, and music sounds crisp. There are even a few vocal numbers at the nightclub, and they sound wonderful.

Extras:
The only extra here is a 12-minute behind-the-scenes featurette. It's nothing special, and though presented in HD, the jagged lines that appear immediately when the program begins will make you appreciate how good the transfer on the main show actually is.

FINAL THOUGHTS:
Recommended. Time has run out for The Hour, but the 1950s soap opera leaves us with two suspenseful seasons, highlighted by a great cast and impeccable art direction. I liked The Hour 2 even more than the first series. The show was really starting to get its legs, only to be cut off at the knees. Still, what you get here is complete enough that you can enjoy it on its own, and though you may experience some wistful pangs of "what might have been?" as the show ends, you will largely be satisfied with the now-complete package. 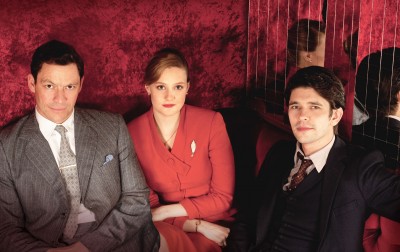