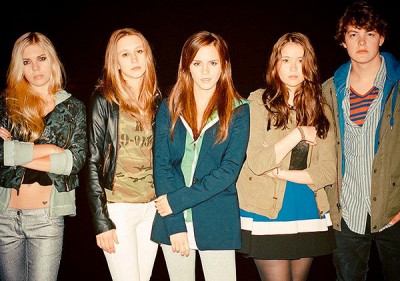 As far as I'm concerned, there's always too much time between Sofia Coppola movies. The writer and director of Lost in Translation and Marie Antoinette returns to cineplexes this summer with The Bling Ring, a stylistic sibling to her much misunderstood 2010 effort Somewhere. For both movies, she used the sunshine faÃ§ade of Los Angeles as her backdrop, though where Somewhere looked at celebrity in decline, The Bling Ring examines the false pursuit of fame.

The Bling Ring is based on real-life events, drawing the bulk of its inspiration from a Vanity Fair article by writer Nancy Jo Sales. The subject of both the magazine piece and Coppola's script is a group of privileged Hollywood youths who robbed the homes of famous people for the dual intent of getting nice things for themselves (they mostly steal cash, clothes, and accessories) and in some cases, be close to people they emulate. Their system was ingeniously simple: they'd use internet gossip sites to track when folks like Paris Hilton and Lindsay Lohan were going to be out of town and then go to their empty homes and find a way in. At the core of it, there is a kind of twisted irony. Here are people with no legitimate option for fame becoming famous by ripping off people famous for doing nothing.

The main duo in Coppola's version of the narrative is Marc (Israel Broussard) and Rebecca (Katie Chang). Both attend a high school for teens who have been kicked out of other schools for one reason or another. Marc is the new kid at the start of the picture, and thus easy pickings for a predatory personality like Rebecca. He quickly becomes her shadow, and it's on her urging they go from stealing money and goods from unlocked cars to sneaking into Hilton's sickeningly ostentatious home (unsurprisingly, Paris let The Bling Ring shoot in her actual house). Before long, they let their other friends in on the secret, including the vain would-be model Nicki (Harry Potter's Emma Watson) and pretend hip-hop thug Chloe (Claire Julien). With each new heist, the kids get more daring and comfortable. Their ill-gotten gains fuel an ongoing party loop. The crimes and the celebrations increasingly blur. 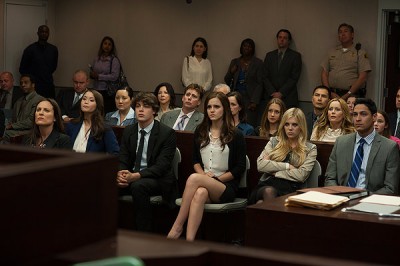 Naturally, as with all such scheming, there is only a brick wall at the end of the tunnel, though Coppola is less concerned with the legal ramifications of the crimes than the criminals themselves. She and her camera, helmed by master cinematographer Harris Savides just before his death last year, stalk through their lives, examining the empty existence that prompts the teens to make the choices they do. Coppola doesn't ever use her platform to psychoanalyze the kids; on the contrary, she offers little outside analysis. Any glimpse we get of what is really going on behind their glassy eyes and plastic appearance is gleaned from their own words, be it what they tell each other or what they post on their Facebook page. Introspection is at a minimum here, and one could infer that there's little inner life to actually explore. In some cases, such as Nicki, it's because her upbringing hasn't provided her with the appropriate tools (her mother, played with the right kind of dopey sincerity by Leslie Mann, home schools Nicki and her sisters using The Secret as her core curriculum). Most of these kids have been medicated their whole life and thus can only seek similar pharmaceutical reactions for recreation. Bright lights and shiny things attract them like the proverbial moths to flame.

The lives of privileged, sheltered adolescents has been a recurring theme in Coppola's work, be it the shuttered sisters in The Virgin Suicides or the travails of the teenage queen in Marie Antoinette. While there was an element of romance, however doomed, in those previous pictures, Coppola consciously avoids glamorizing the Bling Ring's lifestyle. Late in the movie, Marc blames his celebrity on America's fascination with Bonnie and Clyde types, but Coppola's chosen aesthetic works against our fascination. At times, The Bling Ring gently mocks the young crooks and the personalities they emulate; at other times, the camera expertly captures their lack of self-awareness, exposing how lost they are and how that translates to shallow tragedy. This aura of absence is no more evident than in the chilled, unfeeling gaze of the Bling ringleader, Rebecca. She is the most calculated member of the group, and as everything falls apart, one starts to wonder if she's actually a sociopath. Here the casting really works in Coppola's favor. With the exception of Emma Watson, the other actors are basically unknowns, and thus they supply a blank canvas for the director to fill or leave empty as she so chooses. 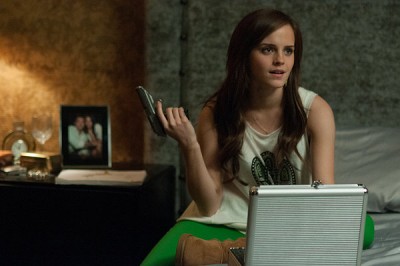 In terms of filmmaking, there is a certain detached dreaminess to the look and feel of The Bling Ring. Comparisons could easily be made to Harmony Korine's Spring Breakers. Coppola's film is both a companion and an antidote to Korine's. By applying the moral compass that Spring Breakers rejects, Coppola has made a deeper and more satisfying film, one that extracts beauty from its coastal landscape rather than injecting it. The existing neon and sunlight, and the occasional paparazzi flashbulb, surrounds every event and object in an (un)natural glow. Coppola and editor Sarah Flack (Away We Go) employ long, languid shots, slow motion, and stuttery montage as the story dictates. The mis-en-scene guides the audience rather than assaulting it.

Granted, some will hate The Bling Ring for all the reasons I loved it, just as some loved Spring Breakers for everything that is opposite. (There is no reason the two can't co-exist.) Anyone could have taken Sales' reporting and turned it into a standard docudrama and imposed meaning and drama onto it. What makes The Bling Ring so special is that only a filmmaker like Sofia Coppola could approach the material with the kind of empathy and confidence to let it stand on its own as well as it does.

There may be too much time between the auteur's releases, but if that's what it takes to maintain her flawless record, then the wait will continue to be worth it. 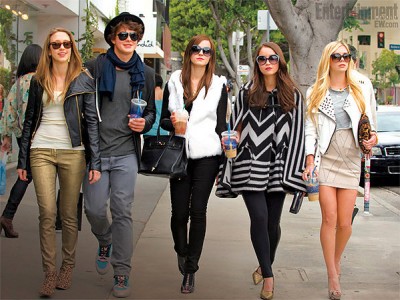