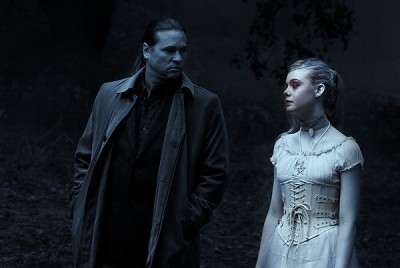 As a middle-aged failure in the writing biz, you'd think I'd appreciate the story of a middle-aged has-been author like some kind of fairy tale, the way a peasant boy dreams of one day being Prince Charming. You'd be wrong, though.

I also can't imagine what it's like for someone of the advanced age, and carrying around the past success, of Francis Ford Coppola to look back at an imagined novelist in my peer group and concoct a myth of what might have been. Because isn't that what Twixt really is? A great director remembering what it was like to spin a vampire tale once upon a time and have it remind audiences of just how good he could be?

Let's pause for a second and get one thing straight. As much as I allowed my base snark to take over the intro to this review, I really wanted to give Francis Ford Coppola the greatest benefit of the doubt when loading Twixt into my player. I respect the hell out of the guy for a variety of reasons, but relevant to the matter at hand, for spending the better part of the new century pursuing independently financed passion projects. For as much as I didn't think Youth Without Youth or Tetro succeeded at their goals, I give the guy props for stretching his creative muscles and, at the very least, trying to do something interesting on his own terms.

It's that respect that makes Twixt all the more depressing, and there's a smidgen of decency in the slight of hand that I am engaging in by writing the smug intro that I wrote, complete with the partially disingenuous self-deprecation. Because right away, I made this review about me and not about Twixt, and in doing so, gave you, the reader, license to declare me a self-important worm, completely distracting you from the matter at hand. Hate me over here, dear audience, and don't ever notice that a revered artist crapped the bed over there.

Coppola wrote and directed and produced Twixt. It's a small story, but one told with ambition. It stars Val Kilmer as a "bargain basement Stephen King," who has brought his bloat, ponytail, and mid '00s vintage laptop to a rundown rural community where the only thing resembling a bookstore, and thus the only place to host an author's signing, is the hardware shop. Val's one fan is the town sheriff, played by Bruce Dern. He refers to himself in the third person and offers to introduce the visiting horror man to the area's own gruesome history of murder. That is, if Mr. Big City Scribe is willing to collaborate on a new book. 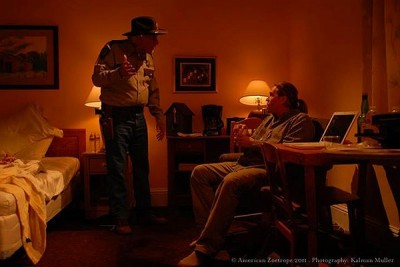 At first, the droop in Val Kilmer's ponytail suggests that he should ignore the crackpot with a tin star and call his agent about MacGruber 2 (tiger snarl!), but when the sun sets, his bloat begins to hallucinate visitations from Edgar Allen Poe (Ben Chaplin) and a dead girl with wicked braces (Elle Fanning). It all becomes fodder for the author's ancient laptop, bringing everything full circle. There's a story here, if only he can follow the dream through to the end.

Oh, yeah. There's also a travelling goth theatre troupe doing a live-action adaptation of Rumble Fish just on the outskirts of Mortville. And did anyone mention that the bargain basement Stephen King is haunted by a daughter who died when he cast her in the third part of his most popular trilogy? If he rescues Elle Fanning, she can star in Somewhere and all will be forgiven.

I'm sorry. I'm doing it again. I really don't want to write about Twixt, so I'm deflecting. Twixt is legitimately one of the most embarrassing things I've seen in a long time. It's rickety and out of touch and technologically deficient, despite what the old man at the helm thinks. Great, you know why Skype is. Too bad you also know what green screen is. And that you seem to have an unclear grasp on how to use either. The digital photography that likely liberated you from the stifling strictures of the studio system is also the Achilles Heel by which you stumble. Twixt looks so amateurish, it's hard to believe that Mihai Malaimare Jr. shot both this visual atrocity and Paul Thomas Anderson's The Master within the same year. Either your voodoo is so poisonous, Mr. Coppola, that you ruin talented people who come into contact with you, or PTA's redemptive powers are so great that working with him is like visiting Ra's Al Ghul in a Batman story and skinny dipping in his aesthetic Lazarus Pit.

All of the above I could forgive or excuse away, blaming budget and the limitations of new tech, if you didn't also hoist yourself on your own petard. Val Kilmer's beef jerky-fueled quest in Twixt's second half (not a joke, we see the foodstuffs plain as day, like a Maltese Falcon made out of cured meat) is searching for the "bulletproof ending," the one his agent (David Paymer) will pay him top dollar for, the one that will put him back on the best-seller list. It's so important to him, in fact, that he repeats the phrase "bulletproof ending" repeatedly between Marlon Brando impressions and a comedy routine where he mimics a gay, African-American basketball player. (Again, not joking. He does both of those. Did the prop man put real Irish whiskey in Val's bottle? Was the same dude also in charge of guns and ammo on The Crow?!)

If you're going to invoke the mantra of "bulletproof ending," you have to absolutely, positively, 100%, without question, beyond a reasonable doubt have such an ending yourself. Or any ending, really. It all has to come together. Edgar Allen Poe, the dead daughter, Elle Fanning, Insane Clown Motorcycle Boy--all of it. You don't just cut away to Val Kilmer's fedora delivering the manuscript. You don't. No, no, no, no. Just because David Paymer tells the hat it works doesn't mean anyone believes him. There's a reason the ponytail has gone into hiding!

There's the road to hell, Mr. Coppola, and then there are good intentions. Being betwixt and between is no good, you've got to choose a side. It would be a real tragedy if Twixt turned out to be your final damnation. 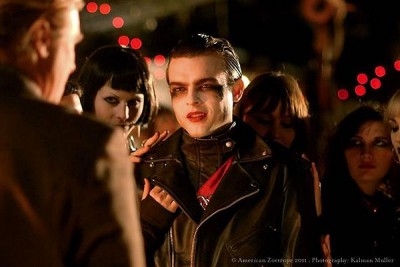 Video:
The 2.00:1 widescreen presentation is excellent. Twixt looks sharp and clear, often too clear for its own good, given how it was shot (some of the sequences were originally intended for 3D). Colors are nicely balanced, and the ever essential blacks look deep and dark, but the cheapness of the production is betrayed by the clarity. The cracks in the special effects show, as well as the shabbiness of the art direction.

Sound:
In keeping with the exceptional technical presentation, the DTS-HD Master Audio 5.1 mix of the English soundtrack is splendid. There are lots of nice ambient effects. Sound fills the room without ever losing focus or becoming distorted.

Another thing to respect about Francis Ford Coppola is how often his work is a family affair. The one supplement on Twixt is a 37-minute "making of" shot by his granddaughter, Gia Coppola. As she explains via title card, Gia had just graduated from college with a photography degree and decided to follow her grandfather around to see all aspects of a movie's production. The documentary itself is nothing special, eschewing revelatory behind-the-scenes footage for more off-the-cuff encounters, but it's still fairly entertaining. Most interesting, perhaps, is the audio tape of Grandpappy Coppola dictating his memory of a 2009 dream that was the inspiration for Twixt.

I'm actually disappointed that there is no mention of Coppola's live remix experiments, where he took Twixt out and edited sequences in front of an audience, going with different takes and jumbling the story, etc. It's also too bad they didn't find a way to somehow replicate that experience via BD.

FINAL THOUGHTS:
Don't make me keep going. I'm a bully and a heel. Call me "Grumble Fish." I hate myself and I want to die. Twixt is terrible. Francis Ford Coppola deserves better than my crappy jokes, but then his audience deserves better than this atrocious movie. Skip It. 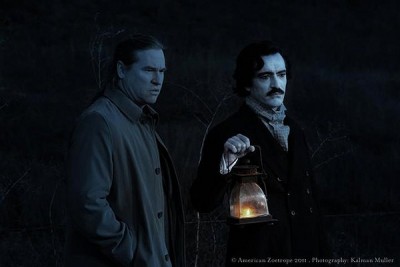