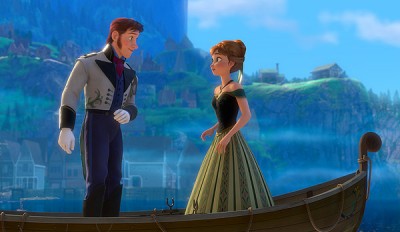 Disney continues its efforts to meld its classic animation style with up-to-the-minute digital tools in their latest, Frozen. The film, based on a fairy tale by Hans Christian Andersen, is less the warmed over leavings of Pixar, a la Wreck-It Ralph, and more in line with the recent approximations of the studio's more traditional Princess stories, a la the charming The Princess and the Frog and the uneven Tangled.

Frozen has the same issues with balance as its Rapunzel-inspired predecessor, finding it difficult to establish a consistent tone and deliver all the elements expected from the studio's best. Namely, humor, adventure, and songs. There's way too many songs, as it turns out. Especially in the first half, when a mega tonnage of exposition is set to music.

The film's central characters are two sisters, Elsa and Anna. Elsa was born with a magical power to generate ice and snow from thin air, but a childhood accident results in Anna's memory being wiped clean of all knowledge of her older sister's special abilities. The hope is that Elsa can get the magic under control, something best done in secret. (Where's Charles Xavier when you need him?) Unfortunately, the girls are orphaned not long after, and Elsa isolates herself. Years pass, and her coronation day arrives. She will have to take the crown and hope nothing goes wrong.

Spoiler alert: everything goes wrong. Desperate for human interaction after growing up alone in the palace, Anna pushes too hard and prompts Elsa to unleash an eternal winter. Horrified by her own actions, the new Queen flees to the mountains, leaving Anna to try to figure out how to fix things. Adding to the mix is a handsome prince who has swept the princess off her feet, and a lovably lunky ice peddler, Kristoff, whom Anna hires to take her through the woods. His sidekick is a reindeer, Sven, who in other Disney movies would be the talking comic relief. Ingeniously, instead of having Sven speak for himself, the directors, Chris Buck (the animated Tarzan) and Jennifer Lee (a writer on Wreck-It Ralph), have Kristoff carry on an ongoing dialogue between himself and his deer, goofing on the fact that when folks spend most of their time with a pet instead of other people, they often end up talking to and for that animal. (Just ask my cat. She'll tell you.)

Taking over the wacky sidekick role is a living snowman, Olaf, a creation of Elsa's that hearkens back to the girls' happier childhood. He is voiced by Josh Gad, whom I usually find annoying in the flesh. (As an actor, he briefly appeared on The Daily Show and has been in films like Love and Other Drugs.) He manages to be silly and lovable, and the filmmakers create good gags for him, including a very funny musical number where the deluded icicle dreams of the summer. Also surprisingly adept as a voice actor is Kristen Bell (Veronica Mars) as Anna. She and the animators are perfectly in sync. Anna's expressions and gestures are delightful. She is a fully rounded character, both in appearance and action.

A lot of the animation in Frozen is stupendous, as are some of the 3D effects. The falling snow makes for a convincing optical illusion, drawing attention even in one's peripheral vision. Elsa's snowy constructs, including a menacing monster, are well suited to CGI. Other aspects of the artistry can be inconsistent. The people can sometimes look rubbery, like Barbie dolls. Likewise, some action is too clean and precise, it lacks the human touch of old-school cartooning. Good design work helps make up for that in most instances. Costumes and backgrounds are exquisite.

In terms of pacing, Frozen feels lopsided. Most of the songs are loaded in the front half of the picture. Composer Christophe Beck (Pitch Perfect) and lyricist Kristen Anderson-Lopez (2011's Winnie the Pooh) aim for Broadway-style showtunes, and the more vintage sounding, the better. While the first couple are excellent, the melodies quickly run out of steam and chintzy pop takes over. Luckily, the musical downturn also occurs right when Jennifer Lee's script really starts to pick up. Frozen has some truly exciting action sequences, it just takes a little bit to get to them.

I hate to crap on Frozen, as it clearly took a lot of effort to pull together. Effort doesn't always do it, sadly. The end result is middling. Youngsters will likely dig it, but this is one that parents and grown-up animation aficionados may struggle to stay invested in.

Be sure to arrive on time to catch a new Mickey Mouse short subject that precedes the main feature. Without giving too much away, "Get a Horse!" is a clever bridge between old and new, using 2D and 3D together in a wonderful manner. The little kids in my audience were howling at the slapstick, which was good, because I was, too.