I suppose one up-side to Hollywood's endless recycling and rebooting of old ideas is that every once in a while they are going to leave a tried-and-true formula just enough alone to get it right. So it is with the new Godzilla, a solid summer blockbuster that delivers the monster-on-monster action kaiju fans are hoping for while managing to craft an entertaining story to give the reptile poundings some purpose.

There's not a lot that's innovative here in terms of plot, except for a bit of retconning to try to create a lineage between modern Godzilla and his original iterations. This is largely unnecessary and probably would hold little water if you watched Ishiro Honda's 1954 original and this Gareth Edwards reimagining back to back. Godzilla 2014 works best as a new beast.

The film opens in 1999, as dual events--a discovery of a giant fossil in the Philippines and a nuclear meltdown in Japan--suggest something is amiss. Flash forward fifteen years and both occurrences have been covered up. Joe Brody (Bryan Cranston, Breaking Bad) was in charge of the plant that suffered the catastrophe, and he has been on the hunt for an explanation. His findings suggest the same circumstances that led to the meltdown are about to repeat, leading him back to the original site. There he uncovers a secret operation underway. The scientists who harvested the fossil are studying something else they pulled out of the caverns. This group is led by Dr. Ichiro Serizawa (Ken Watanabe, Letters from Iwo Jima) and his assistant Vivienne (Sally Hawkins, Blue Jasmine), who find Joe's findings invaluable--if not a little too late. Their test subject is about to wake up, and Godzilla won't be far behind.

The rest of the movie becomes a race against the clock. The monsters are making a beeline for San Francisco to have a violent rendezvous. The U.S. army is trying to figure out how to send the destructive creatures back to the stone age with a minimal of damage. Joe's son, Ford (Aaron Taylor-Johnson, Kick-Ass), is a bomb expert willing to put it all on the line to help out. He's also using the mission to try to get back to his wife (Elizabeth Olsen, Martha Marcy May Marlene) and son (Carson Bolde), who he left in the Bay Area to go help his father. It's not much of a spoiler to reveal that many obstacles get in his way, and the government schemes don't line up and the scientists' understanding of the scaly threat evolves. What else would you expect? 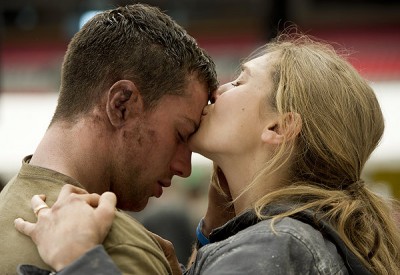 Godzilla is a well-constructed movie. The chase structure works. The human action sequences are energetic and pack plenty of punch, setting up the bigger special-effects bouts that comprise the movie's final act. The screenplay here is by Max Borenstein, using a story by Dave Callahan (The Expendables). They give most of the script's running time to the human side of things: how the people react to what is happening and what they will do to survive. Director Gareth Edwards, who had an indie hit with the low-budget Monsters, makes good use of that focus. Crowd reactions on a Hawaiian beach or trapped in an airport, watching through the panoramic windows as planes crash and explode, add a sense of peril to the proceedings, while Edwards' penchant for inventive point-of-view shots puts audiences in the middle of the danger. Whether it's glimpsing the giant marauders through the goggles of a gas mask or via tongue-in-cheek news reports, there is an immediacy and sense of wonder to how Edwards builds to his big reveals. He hasn't depleted our fascination with his computer-generated creations by the time the monsters go toe to toe and fight claw to claw. His dinosaurs loom large.

To be fair, this ground-level approach can also be Godzilla's biggest drawback. Edwards does not deliver a perfect film. Godzilla is too long in spots, overloaded with exposition and perhaps laying too much foundation for what are otherwise simple explanations about where the kaiju have come from and how everyone intends to send them back there. The film could also have benefited from some added levity. There is no equivalent to Charlie Day's character in Pacific Rim, there is only the occasional situational gag. We're stuck in crisis mode, unrelenting and grim. This self-seriousness only calls attention to the shallowness of this Godzilla's political message; we're a long way from the cautionary parable of sixty years ago. Any slowness is further exacerbated by the unnecessary 3D. Though the multidimensional effects make the opening credits look pretty cool, they fade to the background (ironically) once the movie proper is underway.

Such quibbles matter little, though, every time the King himself appears. The new Godzilla design is awesome, and so is the animation that brings him to life. This version's movements are smooth and natural, borrowing traits and battle strategies from the animal kingdom, often looking more canine than feline in its expressions (as is traditional). The mayhem and the resulting property damage are exciting and fun and not wearisome, even for those of us suffering demolition fatigue. (This ain't no Man of Steel, is what I'm saying.) Given this is what many will be showing up for, it makes the final 1/3 of Godzilla a real kick. 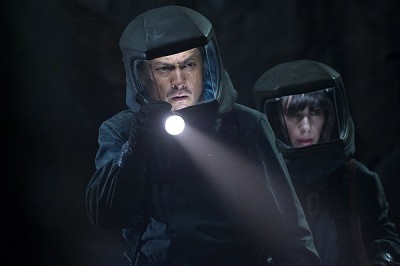