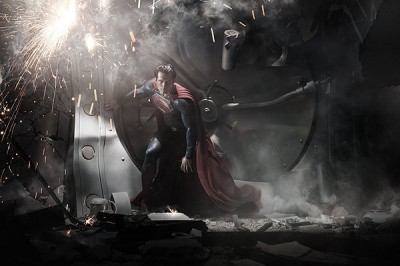 The headline on the front page of the Daily Planet the day after the events in Man of Steel reads, "SON OF GOD BEATS EVOLUTION, STOPS 9/11."

The man holding the paper aloft and smiling like a big dope is Zack Snyder. His pose is meant to be reminiscent of the famous photo of Harry Truman holding up the Chicago Tribune declaring "DEWEY DEFEATS TRUMAN," though there is a certain irony in this. Truman's poop-eating grin was because the paper was wrong, he was actually the victor; Snyder fails to see that his current status is the opposite. He thinks he has made a triumphant Superman motion picture that will eventually supplant all other Superman pictures the way his boss Christopher Nolan redefined the Caped Crusader. History will bear out the opposite, I'd wager: Man of Steel is a mediocre movie with a messy plot that, despite being cool at times, is overlong and far too convinced of its own importance to be anything I'd actually call fun. At least not with any consistency. 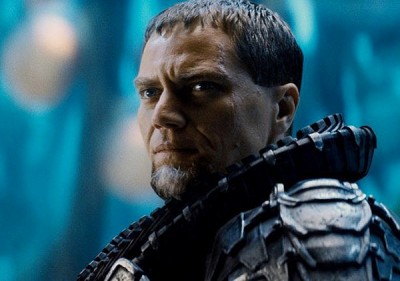 For every good, there is a bad in Man of Steel. And I'm not just talking about the fundamental(ist) clash between Superman (Henry Cavill) and Zod (Michael Shannon with a Stone Temple Pilots chin beard).

Snyder's updating of Kryptonian kitsch is kind of cool, but Superman's suit is still ludicrous.

Amy Adams is really great as Lois Lane, but Laurence Fishburne is wasted as Perry White. Kevin Costner makes a good Pa Kent, but Russell Crowe is a big lump of skin as Jor-El.

Zod's plot to take over the Earth and build a new Krypton is pretty cool, but the way it ties up is anticlimactic. Apparently in the DC Universe they have Marvel Comics movies, because someone in Metropolis was watching The Avengers and said, "Hey, let's do that!"

Some of the action sequences are pretty good, but possibly only by comparison to how dull the standing around and talking sequences often are.

Do you see the pattern here? There is too much of everything in Man of Steel, and not enough skill at putting it together. The oddest thing about Snyder's ascendance to DC's go-to guy for Superman is how much he's shed all of his signature moves. Leave your "slow-motion music video" jokes at the door. Snyder doesn't even work a rape into this. As a director, he's absent. He's merely wearing a Christopher Nolan mask to pull this heist--and his submersion into a more commercially viable alter ego reveals how little he personally has to offer as a filmmaker once you take his bag of tricks away. There is an emptiness to Man of Steel, like Snyder is working his way around a blueprint provided for him and he's hoping no one will notice that he has no idea how to lay the foundation. The movie is visually stunning, but all of Snyder's movies are pretty. Even the rancid Sucker Punch was at least a shiny bauble of kewpie-doll fetishes. For a movie director, Zack Snyder makes great video games. 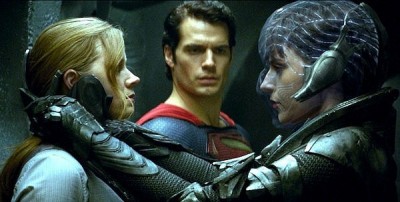 Except not. The flaw in that analogy is that what makes video games appealing is you are an active participant. When the man in the red cape punches the girl in space armor, it's because you pushed a button and made it happen. A Zack Snyder film keeps you at arm's length. He is the obnoxious older brother who hogs the controller and never lets you play. You'll be forgiven for thinking otherwise at the start, because the action on Krypton is pretty great. There, Snyder lets you piggyback on Jor-El as he navigates the chaos, and it's kind of thrilling. Once we're on Earth, Man of Steel never generates that magic again. When Supes trades blows with Zod and his minions, there is a veneer of excitement because it's cool to see big guys beating each other up with train cars and other industrial products. Excitement quickly gives way to tedium, however, as each and every battle essentially turns into digital mayhem. Snyder expects us to get off on wanton destruction, even if it likely means the death of thousands. There is no design to the action. Superman fights without giving a second thought to whom or what is in his way. In his first go-around with Zod's main warriors, Superman tells the innocent bystanders of Smallville to go inside where it's safe...right before his big wrestling match levels the entire city block the moment they lock their doors. Did they manage to escape out the back, or what?

This contradiction might be acceptable if it weren't so at odds with Man of Steel's core message: that there is value in being a noble person who does what is right. It's a theme that the movie otherwise does very well. Henry Cavill is a pretty good Superman. He's handsome, has an impressive physique, and gets the right balance of quiet mystery and earnest intent. You can believe in his choice to protect his adopted world and champion their potential for goodness over preserving a legacy that has run its course due to greed and hubris. The problem is that Snyder only knows how to express that in dialogue, since he's otherwise having too much fun blowing stuff up. Even here, though, he undercuts the story's meaning by overstating his case. While Pa Kent's moral lessons hit the right cord, the director's all-too obvious attempts to graft Christian mythology onto the Last Son of Krypton are laughable. Krypton is seen as a world that failed because it preferred science to the natural order, even though this also provides Superman with a holy mission that one might call "intelligent design." At one point, Clark Kent is framed in a stained glass window, and later, he is shown flying while adopting the shape of a cross, just to make sure we don't miss the allusions. Zack Snyder should have made this a musical and called it Jesus Christ Superman. 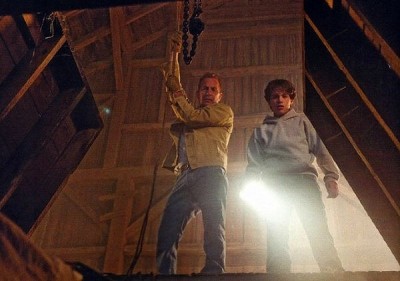 This a lot of stuff to pack into what is otherwise a sci-fi adventure. I don't even want to get into the muddled politics where bits of the movie seemingly are intended to mirror the War on Terror and modern governmental mishaps (Man of Steel makes Star Trek: Into Darkness seem like a cogent, succinct political allegory). If I thought Snyder was a more intelligent director--or, for that matter, David S. Goyer a writer capable of more nuance--I'd think these bizarre choices were signs of a provocative and even subversive movie worthy of debate. (Spring Breakers this ain't.) Instead, these things are just distractions taking away from what might otherwise be a fairly good film. Cut about an hour from the reels and Man of Steel could be a pretty rocking action picture. As it is, it's another mediocre DC Comics adaptation, setting us up for yet another reboot in a few years.

In other words, you might find some enjoyment in the Man of Steel as he is today, but let's hold out hope that he better lives up to his nickname as the Man of Tomorrow. 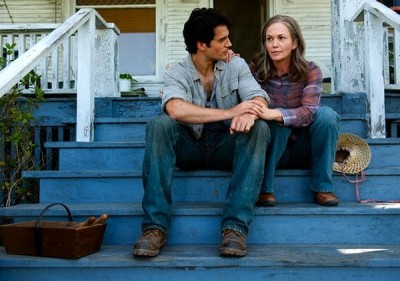