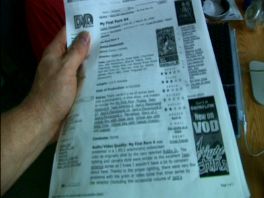 
Currently, Don writes and co-edits the Blue Room column and any submissions or suggestions for future articles, spotlight performers, or other material can be sent to him via email. If you'd like movies reviewed though, send an email to [email protected] since Don tries to focus his energies on bringing you the latest reviews (with a whole lot of help from his fellow writers who are often substantially more knowledgable in their specific fields of expertise) instead of setting up accounts with people.

Oh, and for those in the industry that get their panties in a wad about perceived criticism of their work, let it be known that Don has long held the following quote in high regard:

"Dare greatly. It is not the critic who counts, not the man who points out how the strong man stumbled or where the doer of deeds could have done better. The credit belongs to the man who is actually in the arena."