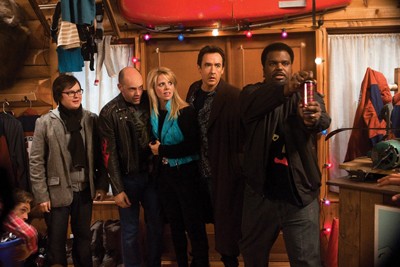 It's become the stuff of contemporary legend, a kind of dumb comedy version of Snakes on a Plane, possibly apocryphal, who knows. Apparently Josh Heald was in a pitch meeting and, having nothing else, tossed out the phrase "Hot Tub Time Machine." Instant greenlight.

I can't say I wouldn't have given it the thumbs up. I think it's a hilarious idea, so stupid it just might work. Too bad it doesn't. Somewhere along the way from idea to finished movie, Hot Tub Time Machine stopped being hilarious and became sloppily average.

John Cusack, The Office's Craig Robinson, and Daily Show's Rob Corddry play Adam, Nick, and Lou, four former best friends who, two decades after high school, have hit a dead end. Failed marriages, failed ambitions, you name it. Lou even now has a failed suicide attempt to call his own, prompting his old pals to book them a trip back to the ski lodge where they used to party as teenagers. Along for the ride is Adam's nephew, Jacob (Clark Duke, TV's Greek). Hopes are dashed when the boys discover the resort town has aged as badly as the rest of them. It's a hellhole. Depressed, the boys climb into the hot tub, only to wake up the next morning to discover they've returned to 1986. They have re-entered their younger bodies and now must try to live out life exactly as they lived it then or risk destroying the universe. Jacob, having not been born at that time, is the sign that something is wrong. He keeps fading in and out a la Marty McFly. (Not the only Back to the Future "homage" either.) In fact, this could be the weekend Jacob was conceived. His mom is on the ski trip! What if he is never born?

Of course, none of the guys are going to be able to stick to the script. Heald and the team of Sean Anders and Josh Morris, who have already proven they hate comedy with She's Out of My League and Sex Drive, make a half-hearted attempt at a redemption plot. Each character sees a shallow second chance ready to be taken and kind of wades ankle-deep into the snow to chase after it. No one is ever really serious about giving this movie much heart, though. Sure, it's often the essential ingredient for classic comedies, but so what? No one ever mistook Hot Tub Time Machine for a classic. 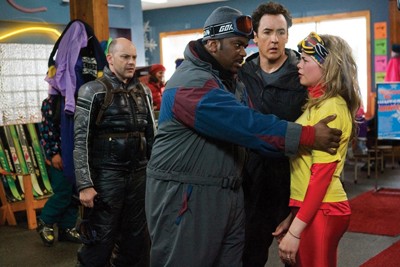 It's sad that they might have mistaken it for funny, though. As a fan of 1980s movies, including many a John Cusack vehicle like Better Off Dead, I would have been more than happy to see Hot Tub Time Machine be one of those parodies that makes fun of a particular kind of B-movie while being that same B-movie at the same time. Director Steve Pink (Accepted) apparently forgot that comedy was hard, however, and instead tries to take the easy way out every time. Putting everyone in day-glo clothes and bad haircuts was enough for him. Why develop it past that? The '80s was an alien world where everyone looked goofy, saddle up for laughter!

Hot Tub Time Machine has no commitment to its own silliness. After about the 10th joke along the level of "What's an e-mail?" you realize that there is going to be no timestream culture clash. (That might have required research, like getting dates right and adding up the years correctly.) There are some good ideas, like the a-hole ski instructor (Sebastian Stan) who, after seeing Red Dawn one too many times, thinks the guys are Russian spies. There is also an amusing running gag with Crispin Glover that works as a througline to the movie. It's a good comedic turn, and he nearly upstages all the leads. Cusack and Duke amble through the film, they don't seem to care all that much. Corddry gives it a good effort, but all the script really requires of him is to be loud and never stop talking. Craig Robinson is also admirably solid, and he also gets the best joke in the movie (all I'll say is it involves a telephone). Of all the actors, Chevy Chase is the only one that is truly awful. Every time he steps on screen as the hot tub repairman, it's more like someone's deranged grandfather wandered into the scene than anything resembling intentional performance.

The makers of Hot Tub Time Machine desperately want you to think this is going to be another Hangover. Four guys on the last weekend before their lives change forever intentionally engaging in male bonding. One is under the thumb of an overbearing wife who has cheated on him, one is the sardonic yet handsome jerk who has been faking his happiness, another is a screw-up with no concept of what constitutes socially acceptable behavior, and the last is the guy who sees clearly but doesn't really matter to the story. Let's reconnect over boobies and booze! (You thought there were no good parts for women in The Hangover? Wait until you see this. Poor Jessica Paré, how did this happen?) Steve Pink even wears his Todd Phillips influence on his sleeve, cutting the first party scene to a Public Enemy track. Ironic whiteboy use of rap, oh no you di'n't!

I'm not even going to give you a nice try on that, guys. Hot Tub Time Machine doesn't even get close to The Hangover. While there were a few chuckles sprinkled here and there, you got nowhere near the same level of laughs nor the same kind of character development. Both may be about a group of guys desperately wanting to get out of a bad situation, but of the two, Hot Tub Time Machine is the only one I desperately wanted to get out of myself.