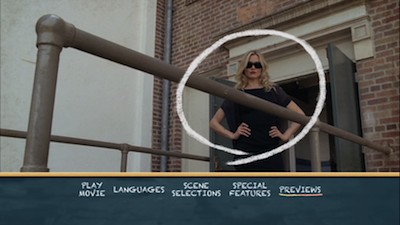 I never really laughed once during Bad Teacher. I smiled a couple of times, and I chuckled twice, but I never once burst out laughing. Which is surprising, because I laughed at the red band trailer when it got released last spring. How is it possible that jokes that worked fine all by themselves were rendered ineffective when surrounded by the rest of the movie? Context must really be everything.

Bad Teacher was directed by Jake Kasdan, whose spotty career includes Orange County and Walk Hard; it was written by Gene Stupnitsky and Lee Eisenberg who in addition to some fine writing credits on The Office also wrote one of the worst comedies of recent memory, the inexcusably bad Year One. Maybe had I looked up these credits beforehand, I'd have avoided Bad Teacher, I don't know. I like Cameron Diaz and I love the idea of her starring in a rude comedy, so I might have tried it anyway. I don't mean to lay it on thick, either. I am more disappointed than I am irked by the lack of quality here. Because Bad Teacher isn't as bad as all that. Not in any sense of the word. It's not shocking like Bad Santa, nor is it awful like Year One. It's far too tepid.

Long story short, Diaz stars as Elizabeth Halsey, a self-absorbed gold digger who, inexplicably, ended up a middle school teacher. Presumably at some point this was part of a life plan, because she's not the type of character who would go through the schooling and the training for no good reason. As the movie begins, her first year as a teacher is ending, and she has already quit. She is supposed to be marrying a rich husband, but his mother has found out that Elizabeth is fleecing him, so the wedding is off. 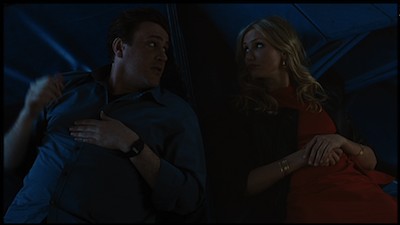 With no other options, Elizabeth returns to the school. She intended to coast through the year by showing movies about inspiring teachers, like Stand and Deliver and Dangerous Minds, earning just enough money to buy herself a boob job and find a new patsy, but Elizabeth didn't factor on the new educator joining the staff. Scott Delacourte (Justin Timberlake, The Social Network) is a goody-goody who comes from a vast family fortune. He would suit Elizabeth's needs for a sugar daddy, but Scott has eyes for another professor, the dedicated and dorky Amy Squirrel (Lucy Punch, Hot Fuzz). At the same time, the smartass gym teacher (Jason Segel, I Love You Man) has a thing for Elizabeth. They both enjoy weed and mean jokes. Hmmm, wonder if they'll ever end up together?

The bulk of Bad Teacher is Elizabeth coming up with new moneymaking schemes--getting bribes from parents, skimming from the car wash funds--while the second half is her covering her tracks. Amy becomes fixated on bringing Elizabeth down, particularly after she scams the answers for the state standardized tests and wins a teaching bonus. In between, Elizabeth messes with a couple of kids (though not many, you'd think this would be the #1 source of humor here), and doles out advice a total of one time. This all leads to a cheap "hail mary" ending where Bad Teacher sells itself out by becoming the kind of romantic comedy it should otherwise be making fun of. That this transformation happens in the last five minutes and gets only the most cursory of set-ups along the way speaks volumes. Somewhere in the development/testing process, someone decided that Elizabeth needed some level of redemption. Either that, or the writers and the director had cold feet about what kind of film they were making right from the get-go. 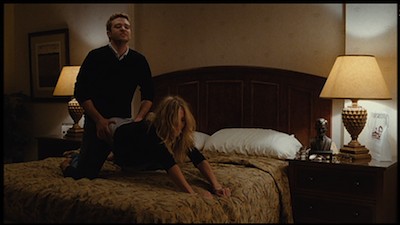 Look, it's hard to be funny. The cliché goes that it's even harder than doing drama. I can believe that. For as lackluster as the script here is, I will give major credit to the cast for attacking it as if it were the best that Hollywood had to offer. Diaz and Punch both commit completely to their roles, and though Segel pretty much cakewalks through his material, he's as likable as we should reasonably expect for his part. Phyllis Smith, Thomas Lennon, John Michael Higgins, and Eric Stonestreet are all familiar comedy faces that are suitably impressive in small roles. Timberlake is a little shticky, but it's okay, at least he's trying. The entire ensemble does their level best to bring Bad Teacher home.

So why does it fail so badly? That's a good question. As hard as comedy is to do, it can also be hard to quantify why it doesn't work. What's not funny to one person can be supremely funny to another. Last Thanksgiving I sat in a room with my entire family and was the only one who wasn't busting a gut over Grown-Ups, and they were all watching it for the second time! If I had to advance one theory regarding the absence of laughs in Bad Teacher, it would be that it lacks the boldness it loudly proclaims it possesses, and is also bereft of genuine wit. Rather, it has only an approximation of both of these things. It's like the writers were doing math, like they knew what was supposedly offensive and how being offensive was supposed to lead to guffaws, and yet they were so clinical in their approach, they took the sting right out of it. It brings to mind the South Park episode where Cartman discovers that Family Guy is made by manatees picking random balls with funny words out of a tank of water and forming the show's gags out of them. The ingredients are amusing--some swears, a few scatological references, a lot of sex talk--but just like the list of food products that goes into any recipe, unless you know how to put them together and why, you're left with a big goopy pile of nothing. 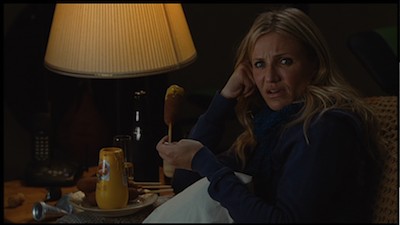 Video:
The Bad Teacher DVD comes with two different versions of the movie: the 92-minute theatrical version, and the 97-minute unrated version with added "raunchy footage." I can't tell you what the difference is, you can't make me watch it twice. I chose to go with the longer cut, and I can't imagine whatever five minutes were added in made the movie that much worse, because you could take out any random five from what I saw and I don't think it would change a single thing.

The anamorphic widescreen transfer (1.85:1) is decent, with good resolution and fine color timing. I didn't really notice any edge enhancement or blocking or any of the usual complaints that we might find with a DVD.

Sound:
Sony gives us a 5.1 Dolby Digital track for the main audio, and it's got some punch to it, with a few back speaker effects and solid balance between music and dialogue. It doesn't really call attention to itself, which in a better comedy would be fairly important. The emphasis is on clarity, and that is where it delivers.

Spanish and French (Canadian) dubs are also provided in 5.1, and there are subtitles in both languages, as well as two in English (standard and Closed Captioning).

Finally, there is also an audio description track option for the blind or people with other sight problems. 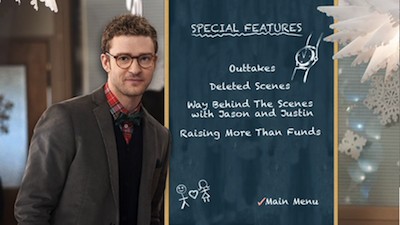 The main extras are outtakes and deleted scenes. In the former category, there are four sequences, less than four minutes in total. These seem to be more ad-libs than the actual deleted scenes, with the only funny one being a collection of bloopers revolving around the word "boner." The legitimate deleted scenes total in six, and are less than six minutes. No laughs hiding in here, so the humor was not lost on the cutting room floor. Most of these connect somehow to other scenes already in the movie and are likely just trims that were made to tighten up the already flaccid narrative. A couple of removed scenes with the student that Diaz counsels in the film may have actually made that storyline make more sense, but that's about it.

Two featurettes comprise the rest of the extras. "Way Behind the Scenes with Jason and Justin" is about five-and-a-half minutes of Segel and Timberlake riffing during a fake interview, and it's the lone funny piece on the disc. They trade some pretty great insults, bagging on each other's previous work. "Raising More than Funds" (3:31) is entirely about the car wash scene and how hot Diaz is. Seriously. That's an extra. Also, moviemaking types, you might want to reconsider what you refer to as "iconic." I don't think Cameron Diaz washing cars in Bad Teacher is ever going to be iconic, much less be considered so less than six months after the movie's theatrical release. Also, why the hell do they bleep the swearing in extras on an unrated DVD?

There is also a menu where you can pick the same Sony trailers that play as the disc loads.

FINAL THOUGHTS:
Skip It. Maybe rent this if you realllly like Cameron Diaz and you have to see every movie she's in, but seriously, we need to finally break that habit of yours. Bad Teacher is a dismal viewing experience. This movie just isn't funny. I can't put it any more clearly. The humor is lazy and you'd have to be extremely shy and naïve to find any of its outrageousness shocking. Seriously, they called it Bad Teacher because they wanted you to think of Bad Santa, and if you thought that movie was funny (because it was), save yourself some heartache and watch that again. 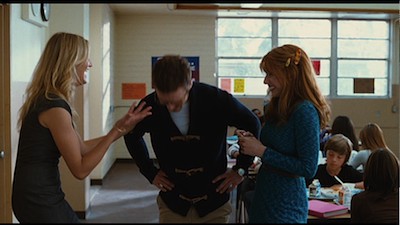