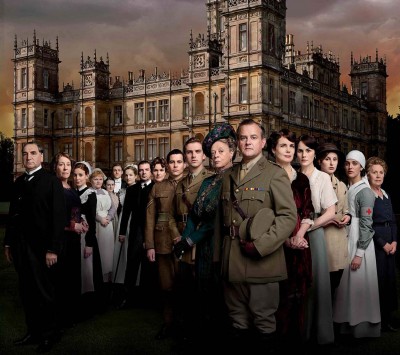 I've been known to complain from time to time how, every Thursday night, my Twitter feed fills up with quotes from NBC's comedy line-up. Every other tweet ends up being someone repeating a line from that evening's 30 Rock, Parks & Recreation, or Community. It can be a little annoying, particularly since I am on the west coast and the Twitterverse starts ruining the best jokes before I even get a chance to hear them first-hand. It's like the internet hive mind is getting together to step on every punchline, a conglomerate of loud know-it-alls calling out the next move instead of just letting the shows exist within their own space.

I thought that was surely the worst it could get for regular TV. Thursday would roll around, and I'd grit my teeth and ride it out. Little did I know, this chatter would be nothing compared to Sunday nights when Downton Abbey airs on PBS in the U.S. Having never seen the show when Season 2 began broadcasting early this year, I was baffled by all the posts about "Shit the Dowager Countess Says" and talk of Bates and Lady Mary and who the hell is Daisy?! Comedian Patton Oswalt would, like clockwork, crack a bottle of wine (or two, or three) and bomb the hell out of the social media device with quips that I am sure were very funny, but they read as absolute nonsense to me. Sunday nights became like Thursday nights--or nights when a reality show has a finale or there is an awards ceremony being broadcast--it was a night to avoid the internet.

Now thanks to Downton Abbey: Season 1 being added to Netflix streaming, and my getting my hands on the Season 2 Blu-Ray, I could actually get the jokes, I could be a part of the cultural phenomenon--but nooooo, too little, too late.

For those who aren't in the know yet, either, Downton Abbey is a BBC television program created by Julian Fellowes, whose previous credits range from Victorian drama (Young Victoria) to modern slop (The Tourist) and touches down in all manner of places in between. Most significant, however, is probably the fact that he wrote Gosford Park, since Downton Abbey comes off, in its early clutch of episodes, as simply Gosford Park: The Series (a joke that I am sure is not original to me, though I did make it to my colleague Christopher McQuain when he asked if he should go ahead and review Season 1). Of course, purists will also undoubtedly point to the fact that both of Fellowes' endeavors owe a huge debt to Upstairs, Downstairs, the fabled British drama about class divisions within a well-to-do English home. 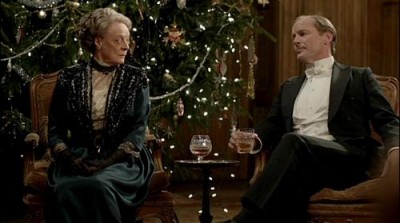 Downton Abbey is the name of a palatial estate in the British countryside. For years, it has been in the care of the Crawley Family. In 1912, that specifically meant that it was under the guidance of Robert Crawley, the Earl of Grantham (Hugh Bonneville). The Earl is married to Cora (Elizabeth McGovern), an American heiress with whom he has three daughters. Also on the property is his widowed mother, Violet Crawley, the Dowager Countess of Grantham (Maggie Smith), an opinionated woman with a firm belief in the old ways and the benefits of privilege. The first season of the show focuses largely on a power void when the death of a relative leaves the eldest Crawley daughter, Mary (Michelle Dockery), in a position where she will no longer inherit the manor. Next in line is a distant cousin, Matthew (Dan Stevens), a lawyer in Manchester.

Playing parallel to all this upper-class drama are the stories of the servants who live and work at Downton Abbey. They constitute a sort of mini society within the house, complete with leaders--the stuffy Carson (Jim Carter) and the dedicated Mrs. Hughes (Phyllis Logan)--and villains--Thomas the footman (Rob James-Collier) and the maid Mrs. O'Brien (Siobhan Finneran). At the center of this are the Earl's valet, Mr. Bates (Brendan Coyle), a new hire who served in the army with his boss, and the maid Anna (Joanne Froggatt). They eventually fall in love. As much as the servants are separated by money and social mores, the lives of the workers and their bosses are forever tangled. There is gossip and scandal alike, as well as genuine affection, particularly as the times bring forth change.

Season 1 ended with Britain declaring its participation in World War I, and Season 2 begins in 1917, after many of the men, including Matthew Crawley and scheming Thomas, have gone away to fight. We are treated to glimpses of the front lines, but for the purpose of the show, the home front forms its own line. As Season 2 gets underway, the politically minded (and youngest) Crawley daughter, Sybil (Jessica Brown Findley), volunteers to work at the local hospital, which has begun taking in wounded soldiers. This eventually extends to Downton Abbey itself. The mansion becomes a convalescent home where officers can recuperate and acclimate before returning to either the battlefield or trying to reclaim their normal lives.

This development serves to ground the Crawleys and get all of them more engaged in the world at large. The Earl deals with feelings of obsolescence, now being too old to go to war, and Mary continues to suffer the consequences of rash words and deeds. Matthew has gotten further away from her, and both take on potential fiancées. The servants also suffer their own losses: one of their own, William (Thomas Howes), enlists and goes to France, while the radical Irish chauffeur Branson (Allen Leech) is rejected due to health concerns. His forbidden romance with Sybil remains something whispered but not yet realized, while Bates and Anna grow closer together. 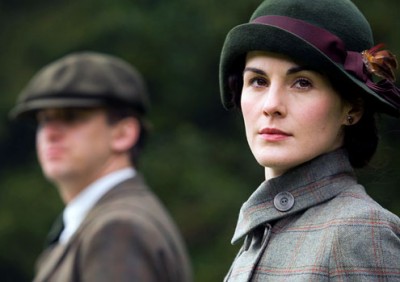 If you think I give too much away, these details are really just the tip of a rather hefty iceberg. The summaries above only go midway through the season, and they don't even touch on storylines involving the youngest daughter or the household cook or the intrigue with Matthew's wife-to-be or his mother (Penelope Wilton). Downton Abbey: Season 2 is eight hour-long episodes and a bonus Christmas Special, spanning more than two years in the narrative world, ending during the holidays in 1919. That's a lot of viewing time and a lot of fictional time. There is plenty of room for drama and romance, and for characters to change and grow as the world is altered all around them.

In terms of costume drama, Downton Abbey is superb. The set decoration and wardrobe is fantastic to look at, and the actors create rich, breathing characters that we want to see again and again. The brilliance of Fellowes' writing is he takes what are essentially stock types and peels back the layers. Mary's sharp tongue and expectations, for instance, mask a troubled interior. She is confined by her expectations. Her relationship with Carson, who dotes on the eldest Crawley daughter to the bafflement of his peers, reveals an inherent sweetness and vulnerability; likewise, her clumsy protectiveness over Sybil is really just envy for her younger sister's courage in following her own heart.

And I only choose Mary because, for some bizarre reason, I favor her the way Carson does, relishing in all of her faults and mistakes while also wishing everyone on the screen could see her the way those of us outside of it do. In truth, I could pick any of the characters and scratch the surface away in much the same manner, examining their complex inner workings. Even the evil pair of Thomas and O'Brien has secret pain that makes them do the bad things they do. Interesting enough, our investment in both sides of the class divide only further blurs the lines between them. Ultimately, we care about the whole of the cast as a unit.

The soap opera of Downton Abbey: Season 2 takes a lot of turns on the way to the finale. Fundamentally, for all the trappings, the series is really just a melodrama, albeit a top-notch example. Peace comes, as history tells us, but not without a price. Fortunes change, lives are lost, and happiness is hard earned. The Christmas episode delivers one of Downton Abbey's finest sequences, the servant's ball, and by hitting such a high note at the end of the cycle, Fellowes fulfills the oldest showbiz idiom and leaves us wanting more. 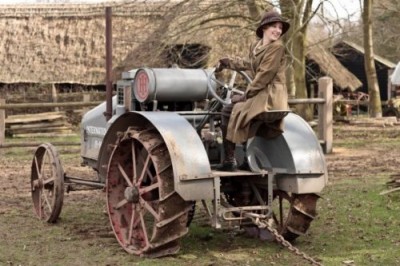 Video:
The PBS Blu-Ray of Downtown Abbey: Season 2 spreads the 9 programs over three discs. The widescreen images are rendered in 1080i, and the shows look fantastic in high-definition. The rich art direction deserves to be seen in such detail. The frame runs deep, and we can appreciate the intricacies of the set and costume designs. Colors are strong and natural, and there is a good contrast of light and dark. Unlike Season 1, we can also compare the beauty of the English countryside to the muddy battlefields of Europe and note how sharply different each look side by side.

Sound:
The stereo mix of the original soundtrack sounds really good, with excellent volume levels and no distortion or glitches. Subtitles are available for the deaf and hearing impaired.

Extras:
The three-disc set is housed in a regular Blu-Ray case with a hinged interior tray and a paper insert advertising other PBS programs.

There are three bonus featurettes, each circling the ten-minute mark. "Fashion & Uniforms" and "House to Hospital" focus on the details of production and creating the period look for the series, while "Romance in a Time of War" leans more toward the character development and the history that informs Fellowes' scripts.

FINAL THOUGHTS:
I'm not one that is always won over by British TV, but I can say without reservation that I am a Downton Abbey fan. The complete Season 2 set offers just over 9 hours of the soap operatic intrigue, broken hearts, and social foibles admirers of the first season have come to expect, but with the added element of a World War. The stakes are higher, but the backdrop of global change also provides more opportunity for character growth. Well acted, superbly designed, and looking fantastic on Blu-Ray, Downton Abbey: Season 2 is Highly Recommended. 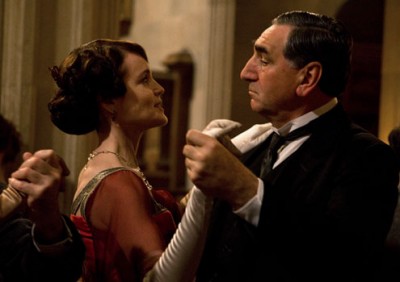