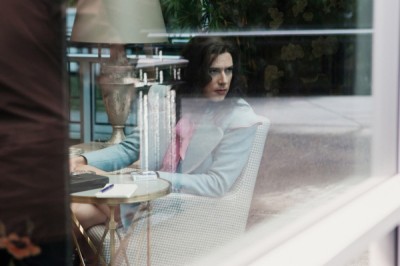 There's a significant moment about a third of the way into Laurence Anyways, the latest movie from young Quebecois writer-director Xavier Dolan (who, at 24, is on his third feature) that exemplifies both how powerful and engaging the film can be and how it undermines itself, how far Dolan has come and how far he has yet to go: After a slow, complicated, and tumultuous coming to terms with the fact that he is transgendered, a woman with the misfortune to have been born into a body of the wrong sex, 35-year-old Laurence Alia (Melvil Poupaud), a celebrated Montreal writer and high-school teacher, has finally summoned the confidence to present herself, as a woman, to his classroom full of late adolescents. Dolan frames the shot long, stark, and central, from the back of the class: Laurence, made up and wearing a sensible but feminine woman's suit and scarf, enters through the doorway at the front as if nothing were out of the ordinary, situates his desk, and prepares to instruct. After an uncomfortable pause, a student raises her hand, and Laurence allows her to speak. "Page 8, paragraph 3…the sub was kind of vague about the assignment," she sincerely and innocuously asks. The camera has remained still, the fraught event has played out in real time, the tension has mounted to a near-unbearable degree before being released in a tidal wave of relief through the student's mundane gesture. It's a moment for which the writing, performances, and shooting have all combined for a cumulative, magnificent eloquence and impact. 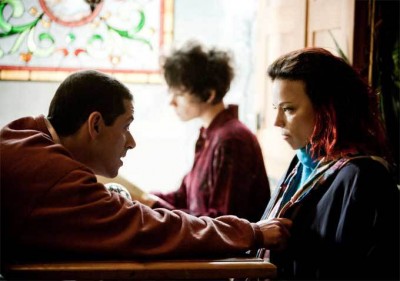 And then, Dolan has the camera swoop in towards Laurence, brings up a pounding techno-dance tune on the sound track, and sweeps us off down the hall with Laurence after class as he struts, suddenly (and inexplicably) confident and carefree enough for the world to be his pride parade. That's what we want for this likeable but human character, what he should rightfully have, but elsewhere in Laurence's tale (which is told in retrospect, from the "present-day" vantage point of a 1999 interview with a journalist, from around Laurence's 35th birthday in 1989, and covers that transformative decade in his life), Dolan sets a much wiser tone that implies the film knows, empathetically and sadly, that it's not that easy -- and to pretend that it is by, say, staging a sappy-triumphalist moment of hallway-strutting to runway music, to boil the complicated and painful coming-out/survival story of a member of a sexual minority down to "it gets better" would be a mistake. In different ways, but almost always having to do with stylistic choices of image, sound, and editing, Dolan again and again uses the language of his medium in a way committed to letting us into Laurence's whole, irreducible experience -- the fears as well as the joys of becoming her truer physical self; the overlaps with, the costs and enhancements to, Laurence's artistic vocation as a writer, her teaching career, and most of all to her love of a longtime girlfriend, Fred (Suzanne Clément), which, despite vastly increased turbulence their coupledom may not survive, actually seems to deepen as he becomes a woman (Dolan is sagely nonchalant about the fact that gender identity and sexual orientation are distinct, and that often a heterosexual transsexual man will retain his attraction to women even as he embraces the knowledge that he is one, too) -- and then cancels it out it with the sort of facile, glib, MTV-music-montage nonsense that sapped the intriguing life from, and ultimately defeated, his debut feature, I Killed My Mother. 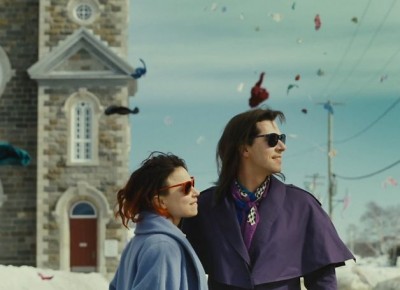 I will confess that I'm one of those holdouts who, when confronted with purely music-video triumphalism like the famed/notorious opening of Saturday Night Fever (to which the pivotal Laurence Anyways moment I've described is clearly an homage), feel nothing so much as annoyance at the filmmaker's pointedly obvious assumption of my credulousness as a spectator. Yes, I want to be drawn in, and yes, I want to be "manipulated" and seduced by the film (a filmmaker can't help being a manipulator and a seducer), but I'm not that easy! If you feel differently, you may be much less equivocal on Laurence Anyways than I, but I think remarking upon this tendency to unmotivated, cheap, flashy tricks goes beyond such subjective responses and tastes in this case, because elsewhere in the film, Dolan signals (and rather convincingly, too) that he means it seriously, and his skill with the camera, and especially with his actors (Poupaud, a favorite of the late Raul Ruiz and recognizable from François Ozon's Time to Leave, is fantastic, as are the soon-to-be-widely-known Clément as Fred and Nathalie Baye (Claude Sautet's Mado) as Laurence's strong, richly flawed mother). The scene in which Laurence trepidantly yet defiantly visits his parents' home to share his realization with his mother and check in on his TV-addicted father is superb: Dolan's and cinematographer Yves Bélanger's use of the square Academy-ratio frame to compose mother and son's tete-a-tete amid the kitchen cupboards and wallpaper, or their choice of lens to make dad's TV den look small, cramped, and claustrophobic -- these are signs of someone fluently luxuriating in the language of cinema. But for every one of these visually, tonally, and dramatically fine moments, there's one -- Fred and Laurence dance in slo-mo at a disco, lit up and fog-ensnared like something out of some Ridley Scott nightmare; a newly self-confident Fred attends a chic soiree and experiences an extended version of Laurence's earlier strut, an interminable melange of music and editing and slow motion that are nothing but pointless and tiresome technical showing-off -- that tell us Dolan still hasn't quite made up his mind what he wants the result of his overdone style to be, what its effects are on the film, its people and their stories. He's still not sure if he wants to direct narrative features in which characters seem to have lives of their own, or slickly graphic-designed videos/commercials in which everyone behind and in front of the camera is always chasing "effect," posing and preening, perhaps catchily but to no discernible consequence. 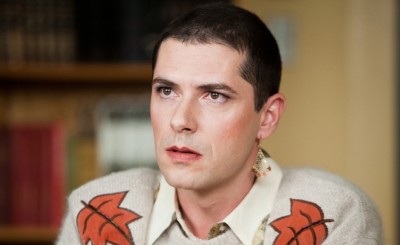 For the first time, however, Dolan overall seems more sure that he wants to harness and tame his style and his story to trot in the same general direction. Laurence Anyways has by far his highest ratio yet of scenes and sequences whose technical proficiency and eye for striking beauty and symmetry contribute to, enhance what the film is doing rather than detracting from or derailing it. As a whole, the film isn't so much too long (its nearly three-hour running time doesn't seem unwarranted for the long, complex midlife metamorphosis of Laurence) as it is too scattershot and scatter-brained (aesthetically speaking) to accumulate as much power as Dolan clearly knows it has a right to. To place it on the spectrum of films with male-to-female transgendered protagonists, Dolan seems to be aiming for the observant, aware, hypocrisy- and simplification-allergic heights of Fassbinder's great In a Year of 13 Moons but keeps getting pulled back down into the "affirmative" but surface-skimming territory of Transamerica by unhelpful way of grimly busy, throwaway Guy Ritchie/Baz Luhrmann freneticism. What does work in the film doesn't make one wince any less at what doesn't (perhaps more, because Dolan also frequently shows himself to be better than that), but it constitutes a large enough share of the experience that it reaches and passes the tipping point dividing regret over wasted talent from hope that Dolan is actually advancing, developing his considerable filmmaking gifts. It is at best a scuffed, mottled prototype of the potentially exhilarating cinema that the still very young Dolan has in him, but he has at last made his first picture to hold its misguided conceits and flourishes sufficiently at bay to let the good stuff shine, and at close enough intervals to get some traction. As the first memorable movie from a still-rough talent, Laurence Anyways is incredibly uneven, but at the same time a more promising than normal early work, a harbinger of more skilled and accomplished things to come. 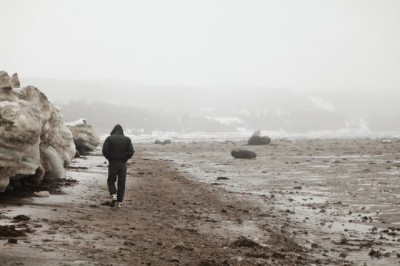 
This transfer/high-def presentation of Laurence Anyways -- preserving its original theatrical aspect ratio of 1.33:1 -- is very nice, indeed. The vividness of cinematographer Yves Bélanger's often highly, captivatingly artificial colors and lighting schemes is very solidly maintained, with stable darks/blacks, natural skin tones, and not a trace of aliasing, edge enhancement/haloing, or any other visual artifacts. A very pleasing celluloid-like texture/grain is well-preserved, too; only the most respectful and restrained use, if any, of digital noise reduction (DNR) or other smoothing processes have been taken to the clean but multilayered shot-on-film beauty of the images.


The disc's DTS-HD Master Audio 5.1 surround track (in Quebecois French with burned-in English subtitles) offers up the film's rich soundtrack in full depth, breadth, and clarity, with very point on its broad sonic scale easily encompassed, from the propulsive bass of its sometimes too insistent pop soundtrack to the highest, crystalline points of its score, all with full aural weight and sonorousness and minus the barest hint of any distortion, imbalance, or any other audio flaw.


The Blu-ray disc of the film also features its theatrical trailer and several other previews for Breaking Glass Pictures releases. A bonus DVD has the remaining supplements:

--An interview/Q&A with writer/director Xavier Dolan conducted earlier this year before an audience, with Museum of Modern Art film curator Rajendra Roy and indiewire senior writer Peter Knegt, as part of a Canada-centric MoMA exhibition. The three (all enthusiastic, ribbing, sometimes excitable men in their twenties; this is a lively discussion) discuss Dolan's three features thus far, his past as a child/voice-over actor, and his aesthetic views, development, and cinematic influences (from Titanic to Magnolia to Jumani).

--About an hour's worth of deleted scenes, selected, assembled, and presented in a more interesting and enlightening way than typical: Dolan, addressing us from the editing table, introduces, contextualizes, and explains the omissions in a way that offers unusually extensive insights into his process. Most deleted-scenes extras demand our conjecture about why the scenes were not used; this one takes us, fascinatingly, inside the mind of the filmmaker.

--A photo gallery/slideshow of about 30 entries including stills from the film, behind-the-scenes shots, and poster pics. 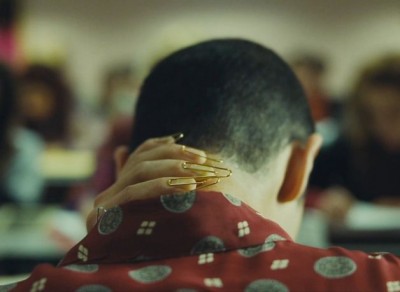 It's a good thing that Quebecois wunderkind writer-director Xavier Dolan has talent to spare, because he spills a lot of it about rather wastefully in his latest film, the transsexual opus Laurence Anyways. Starring the intrepid, accomplished Melvil Poupaud as the film's namesake character -- a successful Montreal writer/professor whose gradual and perilous coming-out as a woman born with the wrong body creates shockwaves over the decade-long span of the film's plot, not least in his relationship with his girlfriend (Suzanne Clément), with whom he's still in love -- the film may be Dolan's first where his authorial sensitivity and dramatic insights, always in at least some evidence, actually outweigh the slicked-up, cheerleading MTV editing/sound/camera maneuvers to which he remains unfortunately all too susceptible. It's a sprawling mess of a movie, frequently obnoxious in its glib stylistic overemphases. But here, Dolan has evolved artistically to a noticeable degree, focusing his narrative and technical savvy onto his audiovisually-told tale to make something that hangs together (if just barely) and ultimately proves itself worth his off-and-on intrusive indulgences. Here's hoping that this prodigious, profligate talent -- he is still only 24, after all, and surely has many more films in him -- keeps honing and growing his gift, continuing and building upon his marked progress; he still has plenty of time to give birth to the fine, moving and engaging, fully shaped and realized work he's only hinted at so far, most of all in this latest frustrating but promising, reservedly Recommended effort.