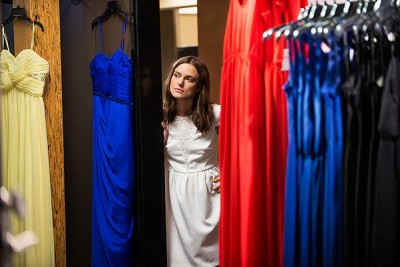 My tolerance these days for stories about wayward twentysomethings of privilege who can't get their act together despite a stable background and a good education and all the things they are told they want--which I know is part of the point, finding out you don't want them--is pretty low, so the fact that I so enjoyed Laggies should tell you something about what a well-observed and smartly played character piece director Lynn Shelton (Your Sister's Sister) has put together.

Written by first-time screenwriter Andrea Seigel, Shelton's dramedy stars Keira Knightley as Megan, the class clown turned late-20s screw-up. Megan is spending her post graduate school years being a living sign for her father's business and avoiding chasing more serious career opportunities or the kind of self-help personality building that her long-term boyfriend, Anthony (Mark Webber, Scott Pilgrim vs. the World), finds so insightful. Her friends from school are all married or getting married and have kids on the way, and Megan just can't relate, which itself is part of the problem. Her master's degree was supposed to prepare her to be a couples counselor, but when she tried to put that training to use, she found she couldn't identify with her clients and thus couldn't really offer much help. Now she'd rather spend the day hiding at her parents' and watching TV.

If you think now would be the perfect time for some kind of shake-up followed by a personality break, you would be correct. A marriage proposal from her boyfriend timed with Megan seeing something she didn't want to see sends Megan in search of an escape. That's when she runs into Annika (Chloë Grace Moretz, Carrie) and her teenaged friends outside a grocery store. The high school kids convince Megan to buy them booze. Seeking the same kind of freedom the youngsters experience, longing for what she remembers as a simpler time, Megan asks Annika if she can hide out at her house for a week and get her head together. 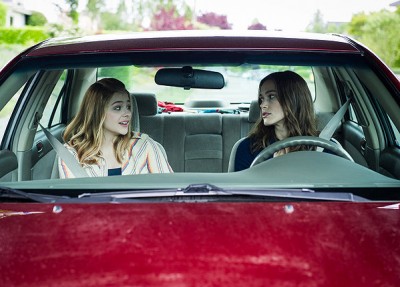 The set-up could have gone a variety of ways. It could have been a lame party comedy with the adult posing as a teenager (or, worse, physically regressing in age or swapping bodies with an adolescent), or it could have followed recent movies like The Lifeguard into questionable romantic territory, with Megan doing things that might morally compromise her quest to find herself. Luckily, Shelton and Seigel are smarter than that and instead set-up Megan to be more like a cool babysitter, going along with the teens on some of their escapades, observing and counseling, but also remaining aware that there is an age divide. Where Megan will compromise herself is in how she fudges the facts to make her retreat from reality more convenient, particularly to Annika's father, Craig (Sam Rockwell, Moon), a divorce lawyer with a bombastic personality, himself balancing the roles of big kid/cool dad with responsible adult/real dad. Craig is a lonely soul himself, having been abandoned by Annika's mother (Gretchen Mol, Boardwalk Empire) several years prior. Working out as these things tend to do, all three of these folks have something they can teach one another, even if it is Megan that has the most to learn.

What impresses most about Laggies is how it manages to be familiar and yet wholly avoid clichés at the same time. Shelton's film resembles any number of mainstream fish-out-of-water stories, but her easygoing presentation and sharp eye for where the humor goes manages to make Laggies feel fresh. The broad humor is reserved for adults, be it lampooning Webber's new-age-like naïveté or skewering bachelorette clichés via Megan's best and most self-important friend (a marvelous Ellie Kemper, almost playing a nastier version of her Bridesmaids character). It's not all mean-spirited, either. Though Sam Rockwell is playing a variation on the Rockwell type, Seigel's script opens him up and takes us behind the defensive humor, showing it as a mechanism for coping with isolation. Gretchen Mol likewise strikes the saddest figure, another lonely person set adrift by her own vanity. 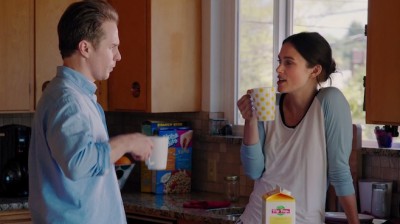 Laggies is really Knightley's movie, though, with the actress appearing in every scene. It's a confident performance, filled with nuance, and never overdone. Even at her funniest moments, when she jokes around with her father (Jeff Garlin) or zings her friends, there is always a sadness visible around the brittle edges. Knightley maintains a consistent anxiety, always reminding us that her brave face is also a false one, only truly letting her guard down the more Craig makes Megan feel at home. It makes for a believable romance, even if it's one told in short hand.

Shelton's sense of style likewise fits nicely between less-is-more indie sensibilities and the high gloss of more mainstream Hollywood comedies. Laggies, which was shot by Benjamin Kasulke (Safety Not Guaranteed), is a good looking movie, but also one that looks like it takes place in the real world. Depressing and drab strip malls, mid-range suburban homes, and gaudy out-of-the-way dives set the scene. These are people who are doing fine for themselves, but not so well as to be unrelatable, and how Shelton designs their surroundings matches that notion.

Above all, though, she treats all of her characters with respect, even the ones she is making fun of. The problems all the teens face are given real weight (which makes it a tad disappointing that Moretz appears to be on autopilot a bit here), even by the other adults, most of whom have now realized that, despite the trappings and the added responsibilities that growing up brings, their concerns aren't all that different at 28 or 38 as they were back at 18. This makes for a pleasing movie experience, one where the audience is invited to observe and get involved, and making Laggies a film you won't want to leave behind once you're through watching it. 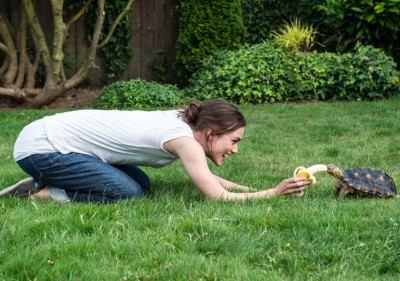