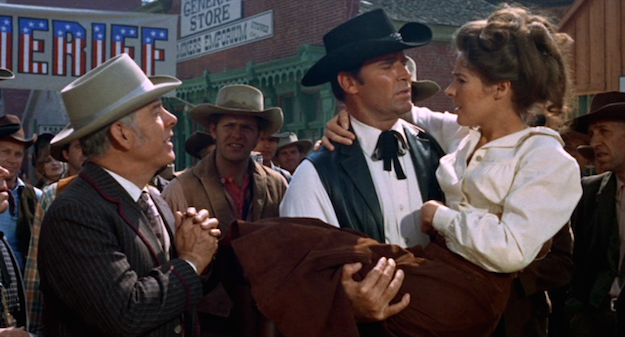 Support Your Local Sheriff from 1969 is a charming Western comedy that nicks some story ideas from the likes of High Noon and Rio Bravo in its telling of an unruly gold rush town that comes to find law and order with the help of a confident, calm, and casual new sheriff, played by James Garner. Garner, of course, made his name as gambler Bret Maverick on the TV western which bore the character's name. So it's unsurprising that there's a significant amount of Maverick's cockiness in Garner's performance here as drifter-turned-lawman Jason McCullough, but it's a little odd to discover there's a fair amount of TV-ness in the film too.

After an unlikely gold strike during a funeral, the quiet town of Calendar, Colorado, becomes a bustling destination for folks looking to hit it rich. One of those folks is Jason McCullough, a quiet and sly kind of a fella who often mentions that he's on his way to Australia (although he seems to be making a heck of detour if that's so). Unable to cope with the exorbitant prices for room and board in town, he looks for a job and finds one that is newly vacated: town sheriff. The mayor (M*A*S*H's Harry Morgan) and town council are delighted to give Jason the job, considering his excellent marksmanship -- and considering the position's high rate of turnover.

When Jason is shown that the town jail is nicely appointed apart from one tiny detail -- the jail cells have no bars on them yet -- he remains unflappable. He just draws a chalk line on the floor, drips some red paint near that line, and concocts an effective lie as to what that paint actually is. It's effective enough at least to keep Jason's first prisoner, the slightly dim Joe Danby (a wonderfully utilized Bruce Dern), from getting loose.

Needless to say, some folks end up surprised that there's a new sheriff in town who looks like he's sticking around. That includes Joe Danby's kin, who've been enjoying carte blanche in Calendar since they have the land, money and muscle to throw their weight around. The head of the clan, Pa Danby, is played by Walter Brennan, whose reactions to Jason's uncommon behavior (like sticking a finger into the barrel of Pa's drawn gun, as shown in the poster/DVD cover image) are adorably flabbergasted. Outmatched by the sheriff's odd point-of-view and seeming inability to be intimidated, Pa Danby decides to hire some professional gunmen to help get his boy out of jail. Things don't go exactly to Pa's plans.

Wall-eyed character actor Jack Elam (Kiss Me Deadly) is a delight as Jason's begrudging deputy. In fact, almost all of the supporting cast is aces, including Sam Fuller fave Gene Evans, The Bad Seed's Henry Jones, Dick Peabody, Willis Bouchey, and Walter Burke. Only Joan Hackett as love interest Prudy Perkins sticks out like a sore thumb, but considering the mess of contradictions the script has thrown at her -- Prudy is somehow smart enough to be the most financially successful woman in town and dumb enough to not realize when her dress catches fire -- the character's awkward appearances in the film cannot be laid solely at the actress's feet.

While Support Your Local Sheriff is awfully amusing and frequently quite smart, director Burt Kennedy (Return of the Seven, Suburban Commando) fails to capture any sense of cinematic scale in the way he stages the action. His fairly ordinary coverage, augmented by Harry Stradling Jr.'s flat studio cinematography and Jeff Alexander's on-the-nose goofy musical score, often makes Support Your Local Sheriff play like an extra-long pilot for a Jason McCullough TV series. Granted, I would watch the rest of that TV series in a heartbeat, but one can't help but feel that if William Bowers's script were approached more imaginatively, it could have been elevated beyond being merely an enjoyable lark. 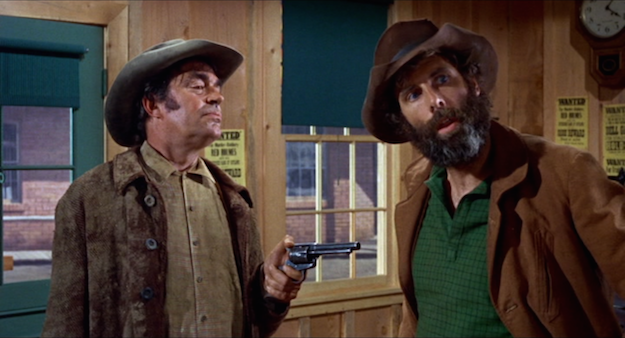 The Video:
The fine folks at Twilight Time have snagged the Blu-ray rights for this title and its semi-official follow-up Support Your Local Gunfighter, so Kino Lorber's Studio Classics line is only offering up the DVD version of this re-release. I can't be sure how this disc compares to the old MGM release from 2001 but, in general, this widescreen 1.85:1 transfer is attractive with minimal digital compression artifacts and noise. Some of the wider shots get a bit soft, but detail is good in general. Color is excellent, looking rich and saturated without sending the skin tones out of whack. The black levels are nice and deep without crushing. If the Blu-ray is going to be taken from the same master, then I expect it will be worth waiting for. If you're sticking to SD, this is a very strong presentation.

The Audio:
No hiccups or concerns with the Dolby 2.0 mono audio. The dialogue, gunshots, and Jeff Alexander's over-the-top score all come through cleanly. The disc offers English subtitles.

Final Thoughts:
James Garner is his usual wickedly sly self in this charming Western comedy. The supporting cast is top-notch too. You HD diehards are probably going to want to wait for the Blu-ray release in early 2016, but for those who are less fanatical, this great-looking DVD is going to do the trick. Recommended. 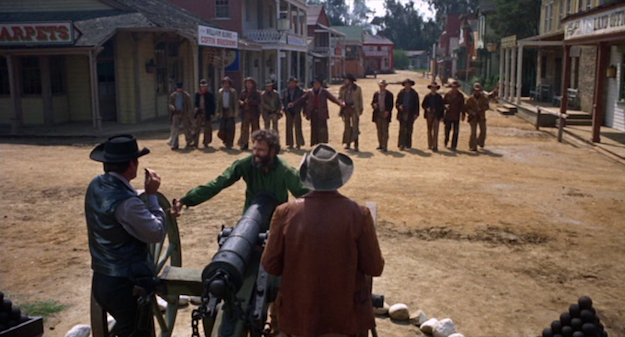