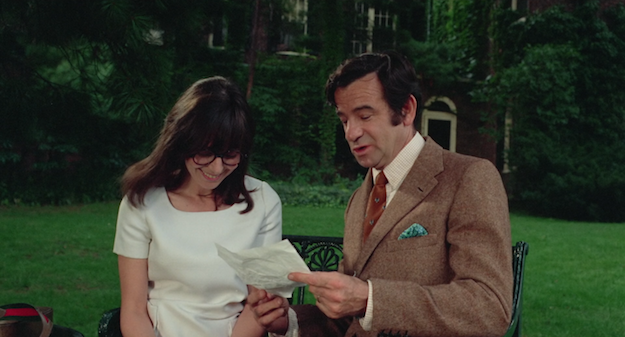 When reviewing Elaine May's directorial debut A New Leaf (1971), it's tempting to review not just the film on the screen, but the fabled three-hour version that May turned in to Paramount Pictures, which they promptly seized from her and then essentially cut in half. The version that we have now is an offbeat, sometimes biting romantic comedy with a sprinkling of dark jokes about murdering one's wife for money. May's original concept -- based on a story by mystery writer Jack Ritchie -- was supposed to go the full Kind Hearts and Coronets route, with even darker humor and an actual body count. However, no one dies in the release version, which is literally G-rated.

Once you know about the lost, longer version of the film, it's hard to un-know it. The film's first hour is short on conspicuously missing material, but the final forty minutes start to get downright choppy. Still, the cast is so excellent, and May's approach to the material is so idiosyncratic, that it's hard not to treasure the concoction that we actually wound up with.

Walter Matthau is tremendous as Henry, a middle-aged trust fund kid who never learned responsibility and never really grew up. Money is no object to Henry, which is why it becomes a world-shattering revelation that he has none. He's spent it all. Rather than be cast out of his social circles, Henry ponders suicide. But before Henry can do anything too rash, his valet Harold (George Rose) -- an anachronistic "gentleman's gentleman" of the all-knowing Jeeves variety -- suggests Henry give up his bachelor lifestyle and just marry into money.

After a series of failed encounters, including a waterskiing accident and a near-miss with Made for Each Other star Renee Taylor's heaving bosom, Henry chances to find Henrietta (director May herself, perfectly pixilated). While the similarity in their names might lead one to assume these characters are two peas in a pod, Henrietta is too eccentric, too scatterbrained, too sloppy (she is constantly covered in crumbs), too nerdy (she is a botanist, after all), and too tasteless (she only drinks a presumably horrible wine cocktail made with fortified Mogen David) to truly appeal to Henry. But she is filthy rich.

Henrietta is an amiable enough person that it doesn't take too much convincing to get her to agree to the marriage. Her lawyer, Andy McPherson (Jack Weston), who has been nursing a crush on Henrietta -- and has been bilking her himself -- decides to make himself a stumbling block however. Henry's uncle (Neil Simon regular James Coco, gleefully vindictive) also threatens to spoil the game, so he can gather up all of Henry's remaining assets and leave his spoiled nephew really and truly in the poorhouse.

Matthau and May have a wonderful Burns-and-Allen-ish rapport, with perennial grouch Matthau affecting varying levels of condescending patience or barely concealed fury at the oblivious social fumbles or physical stumbles of May's character. We can easily understand how this shallow, highborn man could be pushed toward murdering his naive (Henry often uses the word "primitive") wife, and eventually we can just as easily understand how he might be disarmed and won over by her unselfconscious high-spiritedness and, well, goodness.

A New Leaf is far from a perfect film, but it contains so many great comic choices -- in its writing, its directing, and especially its acting -- that it now seems a horrible shame that Elaine May's movie career, on both sides of the camera, wound up being so abbreviated. 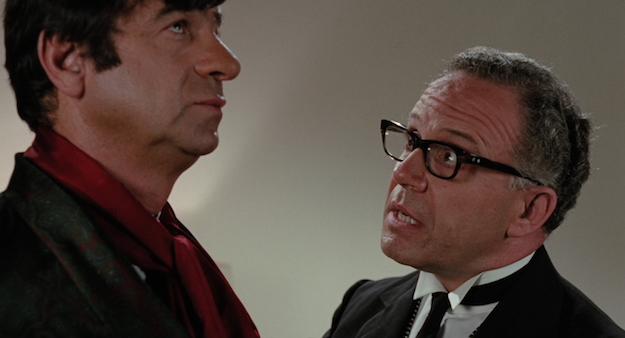 The Blu-ray
The Olive Signature version of A New Leaf comes in a limited edition of 3500 copies. It is packaged with a color booklet that includes photos, an essay about the film, and a reprint of Jack Ritchie's story "The Green Heart" upon which Elaine May's script was based.

The Video:
One of the big selling points of this Olive Signature edition is better picture quality than Olive's bare bones Blu-ray from 5 years ago. Sourced from a new 4K scan and encoded with a generous bit-rate, this AVC-encoded 1080p 1.85:1 transfer probably represents A New Leaf looking the best it's going to look. Excellent detail reproduction, especially in the close-ups, with solid, balanced colors. A little bit of speckling, but no major damage. However, this is an odd title to get a spiffy visual upgrade. Overall, Gayne Rescher's cinematography isn't exactly eye-grabbing. There's enough contrast and depth that we're not quite getting TV-level flatness -- but Rescher uses pretty typical high-key studio lighting for a comedy of this era. All in all, it'll be nice to have high-quality images of Elaine May from the film to add to my inevitable new fan blog.

The Audio:
The DTS-HD MA 2.0 mono audio is in pretty good shape. Some film crackle, but nothing intensely distracting. Evidence that this was an improv-heavy movie is revealed through certain instances of indistinguishable overlapping dialogue or certain lines that sound vaguely muffled or off-mic. This is clearly in the source material and cannot be blamed on the digitized version. One subtitle option: English.

- Smukler places A New Leaf within its historical context, in terms of pop culture expectations, show business norms, and the burgeoning second wave of feminism. It's a matter of taste, I'm sure, but I prefer when commentaries engage with what is happening onscreen. Smukler instead has crafted a well-researched, podcast-worthy lecture that only occasionally makes mention of what we're seeing. She does admittedly provide an excellent breakdown of the battle between May and Paramount over the edit of the film.


Final Thoughts:
Elaine May is a vastly underrated filmmaker, and her directing debut is a true forgotten gem. The A/V upgrade and added bonus features on this new Olive Signature edition easily make this preferable to the original bares-bones disc. However, if you're not dissatisfied with the old disc, I don't think a double-dip is necessary. None of these new perks are totally essential. On the other hand, the reprinted short story is immensely cool. Recommended. 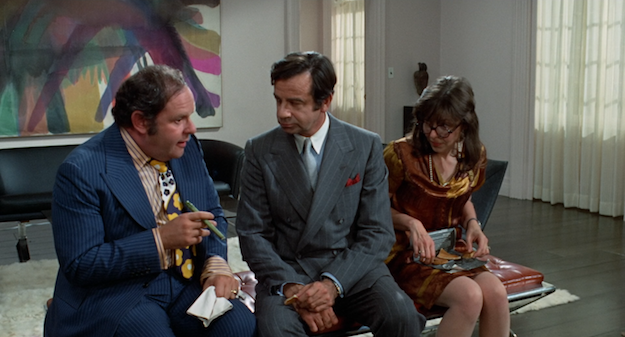