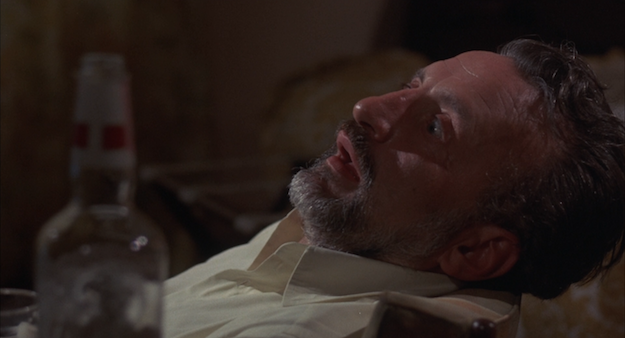 1971's The Hospital may be the film to win writer Paddy Chayefsky his second Academy Award (after Marty) but now it plays like a dry run for the masterpiece that would win Chayefsky his third statuette, Network. In both, Chayefsky uses a mix of satire, silliness, and straight-faced drama to expose the foibles of an organization meant to serve the public good (healthcare, television journalism) that has succumbed to its own worst habits. And in both, a despondent middle-aged protagonist -- once a wunderkind in his field -- finds a new lease on life thanks to the sudden appearance of a radical-thinking young woman.

George C. Scott stars as Herbert Bock, the chief of medicine at a New York hospital beset by problems. The most pressing of these problems is that doctors are mysteriously winding up dead, possibly from the inattention of the staff or possibly at the hands of a serial killer. Or possibly a little of both. Bock is horrified by these developments, but he is impotent to do anything about them -- oh, and also he is impotent. Full stop.

Enter Emma Peel -- I mean, Diana Rigg -- as Barbara, the daughter of an unfortunate patient who has gone from healthy to comatose while in the care of Bock's staff. Barbara is herself a nurse who believes in alternative, shamanistic healing and has a taste for older men. After telling Bock she wants to take her father out of the hospital, she stays up late to listen to his alcohol-soaked, suicidal ramblings. She challenges him, sparks his anger and his lust; eventually, he forces himself on her. In the cockeyed world of this film, that's an emotional breakthrough. Scott sinks his teeth into the character's nihilistic self-pity, and Rigg makes her character's thinly sketched point-of-view almost fully believable (her accent work, which wanders back and forth from New England to Jolly Old England, is less so).

As in Network, this film's scattered satirical jabs are more effective than the mid-life crisis throughline that Chayefsky seems so focused upon. Frances Sternhagen is memorable as a pain-in-the-ass paper pusher who harangues the ER inhabitants for their insurance numbers. L.A. Law's Richard Dysart is a similarly sickening treat, as an incompetent surgeon who cares more about his stock portfolio than saving lives. Other familiar faces that pop up include The Sopranos' Nancy Marchand, Who's the Boss? costar Katharine Helmond, and Stockard Channing as an E.R. nurse. IMDB claims that Christopher Guest has an uncredited part as a resident, but my eyes weren't keen enough to spot him.

The Hospital isn't bad for what it is, but what it is an early draft of a much better movie to come. Director Arthur Hiller (The In-Laws) handles the many shifts in tone in Chayefsky's script effectively. The attempt to blend personal drama with social import and high-concept farce is admirable, and that ambition makes the film watchable even when it's not quite successful. If you haven't seen The Hospital, I say, give it a spin. But keep your copy of Network handy; you'll probably be inspired to watch it again right afterward. 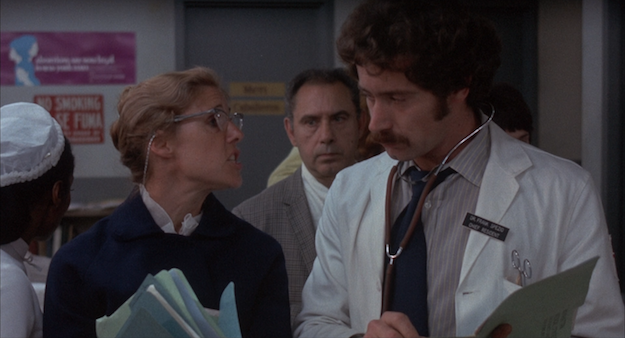 The Blu-ray
The Hospital comes in a limited edition of 3000 copies. A booklet featuring a liner notes essay by Twilight Time's Julie Kirgo is included.

The Video:
No serious effort seems to have been made to clean up dirt and speckling, but otherwise this AVC-encoded 1080p 1.85:1 transfer looks good. Consistent color and clarity, with well-resolved film grain and satisfying fine detail reproduction. Well-defined shadow detail in many of the dark scenes too.

The Audio:
The DTS-HD MA 2.0 mono audio has a realistic, semi-documentary flavor to it. Fairly limited, and showing slight evidence of distortion whenever Scott growls and bellows his dialogue. Otherwise, it's not hard to make out, but there's an optional English SDH track if you need the assist.

- Pop on those subtitles and recite the dialogue with your friends.

Final Thoughts:
The Hospital has a great central conceit -- involving medical professionals falling victim to their own indifference -- augmented by plenty of memorable performances, interesting stand-alone scenes, and snappy dialogue exchanges. The whole is not entirely greater than the sum of the parts but the film still comes Recommended. 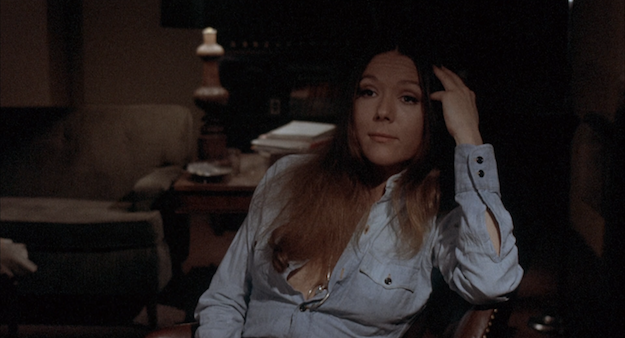