This 1979 release from AVCO/Embassy Pictures is quite a curiosity. It was made to tie in with the 1980 Olympics, although it doesn't really present them in a favorable manner. The story goes that it would initially play in theaters summer 1979, which it did, and then show the next year on network TV as a two-part miniseries with additional scenes. Although this movie has the US competing at the 1980 Summer Olympics in Moscow, in reality the country pulled out of the games that year, and this movie's TV broadcast was pushed back a year as a result. 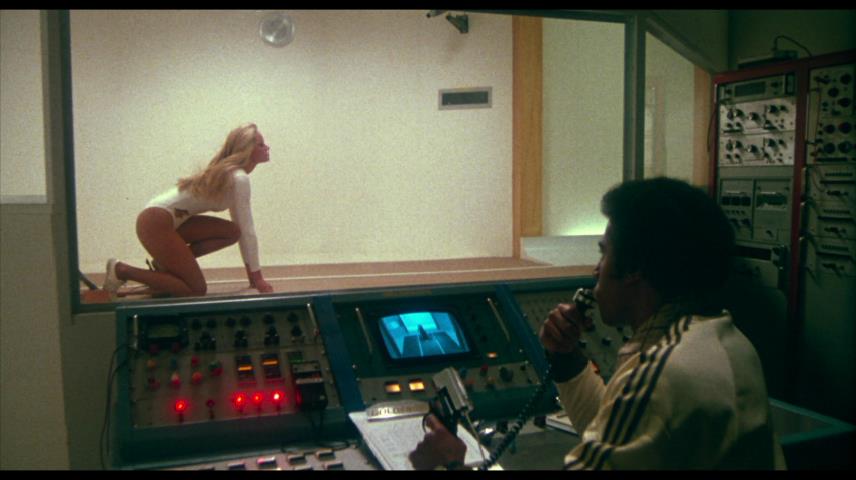 Model Susan Anton makes her movie debut as Goldine, being trained and treated from birth to be a super-athlete known the world over as Goldengirl. Her backstory isn't made very clear and after seeing the movie I'm still not sure if she was born normally or genetically engineered in some way. An early scene that shows something is up with her simulates a press conference, where she is asked recorded questions in an empty room (in preparation for the real thing later) and seems to reply with responses pre-programmed into her. Throughout the movie she's promoted and manipulated by a team of men, we learn that one of them (Curt Jurgens) is a former Nazi German scientist who adopted Goldine after coming to the United States and has since made her a human experiment. James Coburn is Dryden, a promoter who has come up with her "brand name" and lined her up for media appearances and brand endorsements hoping that after she wins many Olympic medals she'll be bigger than Bruce Jenner was in reality then.

The rest of the cast is rather interesting, including an early role from Michael Lerner and Robert Culp playing a sportscaster. Narratively though this movie is a mess. I had known for a long time that this was poorly received by critics and audiences at the time of its release, in some cases that just makes a movie more entertaining in hindsight. That just isn't the case here however- the performances by the cast, even the more seasoned actors, are quite dry and feels like the kind of movie where some would either fall asleep or walk out- I managed to stay awake through it but mainly felt sorry for all involved. (Director Joseph Sargent would go on to direct Jaws: The Revenge in 1987 which many regard as one of the worst movies ever made, but I found that far more watchable than Goldengirl.) I made sure to capture and share this shot, where a small mirror's positioning allows for the boom mike to be perfectly reflected- how did anyone not catch this? It's almost like they set that mirror up there for the microphone to show up! 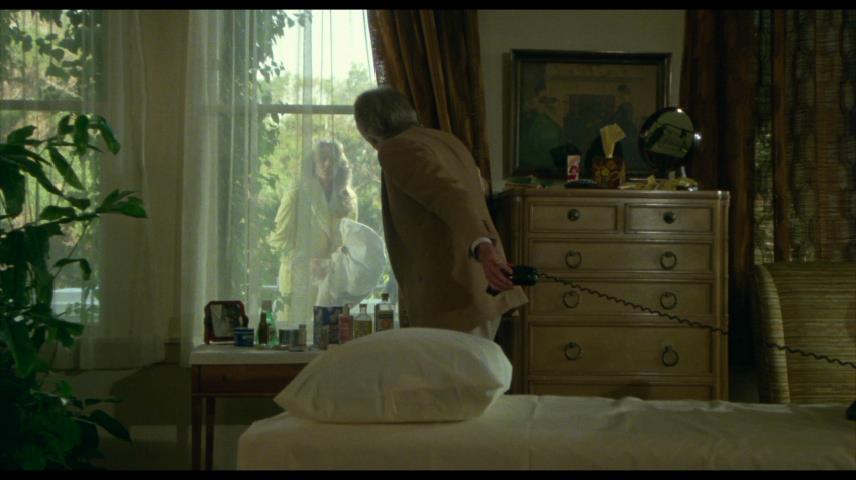 Giving the title character more of a backstory and spending time on it might have made this a better film, although it would undoubtedly be longer at least it would give the audience more reason to care about her. 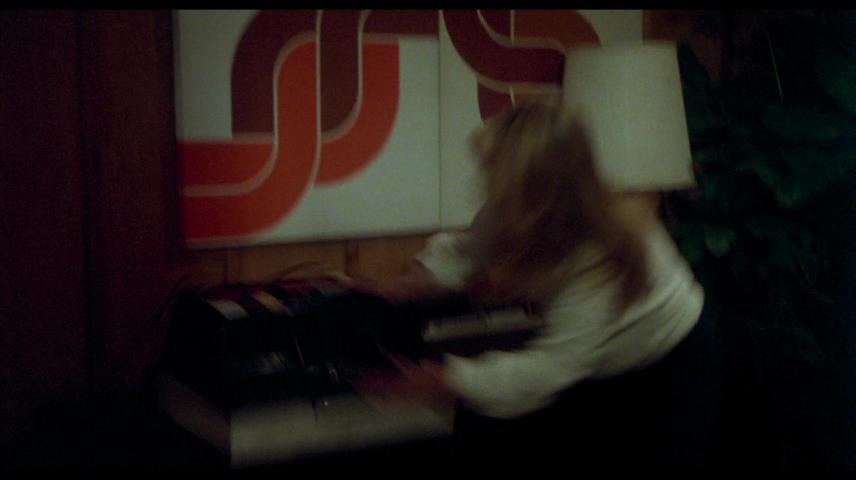 This is another release that has both good and bad news- the good news is that after being unavailable since its 1980s VHS and Beta appearance on Embassy Home Entertainment, the picture quality here is very good (the commentary mentions that the VHS "looked like garbage", although they don't specify which edition they were referring to- it was initially put out on the Magnetic Video label before it was on Embassy.) The movie itself isn't very good-looking with a primarily brown tint throughout, but this Blu-Ray disc presents it as best as possible in its proper 1.85 ratio with clean elements free of any dirt or scratches. The single-layer disc is free from any noticeable digital compression artifacts or banding, so visually this release will please fans of the movie or first-time viewers despite its inherent shortcomings as a film.

Now the bad news, and my reason for giving this disc a "Skip It" rating- the audio was originally produced in Dolby Stereo, rather early in the format's history when not every movie used it. This Blu-Ray however presents it in flat mono; the audio is encoded in 2-channel DTS Master Audio but there's zero separation, and is indicated as mono on the back cover. It's possible that stereo elements were unobtainable for this release, as back then stereo titles on film had both mono and stereo film prints made, but as the later Embassy VHS tape is indicated as Dolby Surround on the cover it's really a let-down to have this Blu-Ray in mono. The fidelity of the track here on its own merits is rather poor on top of that, with the usual limitations of optical sound. If this had been taken from an optical track, at least leaving the sound reader in stereo mode rather than mono would have at least shown some effort was made to present the audio accurately. While the mono audio is more likely the fault of the elements used rather than a blatant error of a wrong setting (which has happened with a number of titles from Olive Films in particular), I just can't give this a pass when the last VHS release was in stereo. Hearing-impaired subtitles are included. 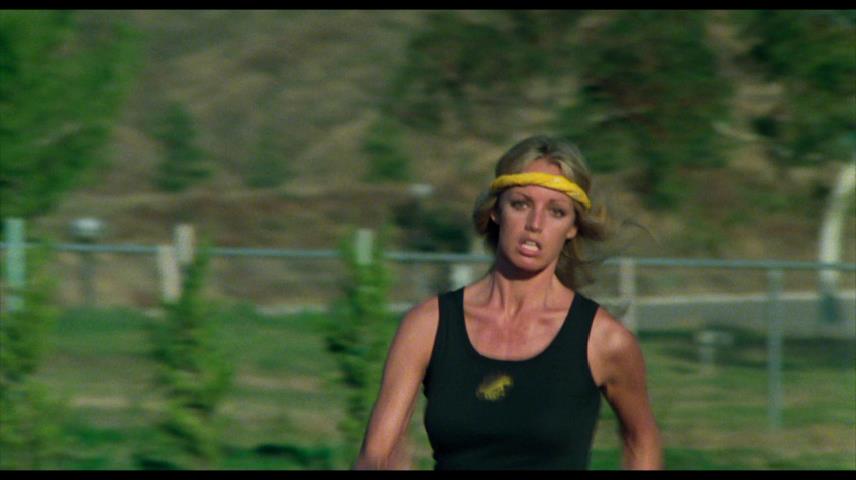 The highlight of this release is an audio commentary track with "Film Historians" Howard S. Berger and Nathaniel Thompson- although neither had any part in the making of this movie, one claims to be a fan of it having seen it several times over the years. They give plenty of information such as the events of the time that led to the US boycotting the Olympics, details of the cast and crew and compare the movie with others of the late 70s- they make a good point that many sports-themed movies of that time had sinister undertones rather than glorified the sports depicted. They don't acknowledge the obvious appearance of the boom mike in the mirror (they are far off on another topic when it shows up), nor address that this disc is missing the stereo sound mix.

Susan Anton makes a new appearance for this disc where she talks a bit about her experience making the movie and hopes that it will be more widely seen now after being unavailable for so long, character actor Nicolas Coster who plays a doctor also has an interview segment. Composer Bill Conti appears in a segment that doesn't seem to have been made for this release in particular as he doesn't even mention Goldengirl, but it's quite interesting for fans of film music as he discusses many other films he's scored. Finally there's a number of trailers in standard-definition, once again annoyingly presented as separate titles that play sequentially yet aren't given menu options to access individually: Goldengirl, Island of the Blue Dolphins, Number One, Counterpoint! and what looks like a TV spot for Rollerball which this movie was compared to in the commentary track. 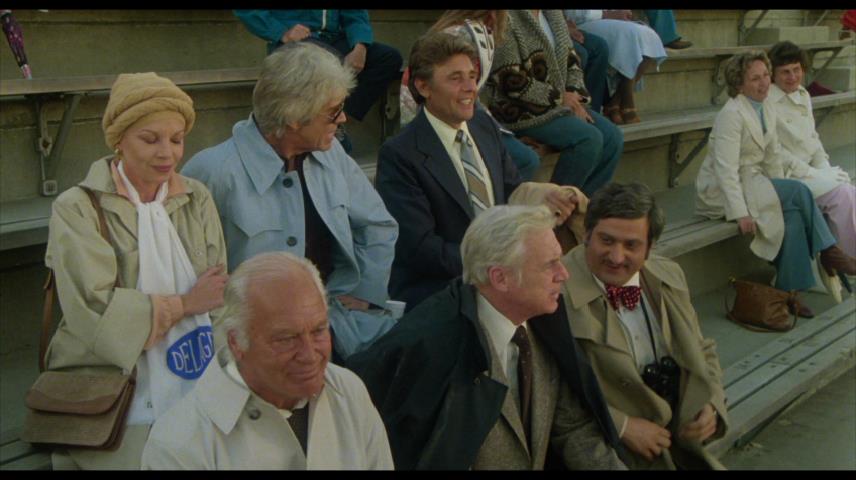 Goldengirl is of interest just for the historical reasons given- while I'm usually kinder to a movie's badness after a few decades have passed and I enjoy laughing at just plain bad movies most of the time, this one is still a chore to get through. There's a few moments of camp but just not enough to be worth the time of less than devoted viewers. The real shame here is the mono audio when this was originally released in Dolby Stereo and exists on VHS and Beta with that audio intact; perhaps the full sound mix would have made this much more enjoyable for me, hearing it in mono is about as big a disappointment as having a color movie presented in black and white.