Thorn in the Heart, The 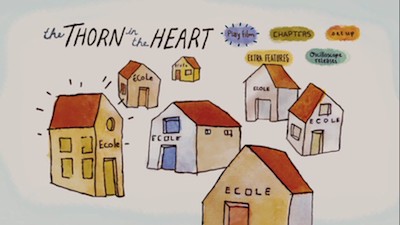 Michel Gondry has a reputation for his bizarre, pixie-dusted imagery, earned with loopy feature films like Science of Sleep and Eternal Sunshine of the Spotless Mind. Yet to box him in as the maddest of hatters is to ignore how facile he is with reality, as well. The Block Party film he made with Dave Chappelle is one of the most lively concert films I've ever seen, one that has as strong an interest in the people who come to listen to the music as it does the music itself, and yet never feels like it's sacrificing one for the other.

Gondry's latest film, the documentary The Thorn in the Heart, is a more quiet affair than Chappelle's shindig, but it's far more poignant. Its obsession with youth and memory also connects it back to the subjects of Gondry's fictional features. It's just now he's digging into his own memory, looking through his family history to examine a central figure that has fascinated him ever since he was a child.

The subject of The Thorn in the Heart is Suzette Gondry, by all accounts a remarkable woman. A school teacher who began instructing classrooms in the 1950s, she moved all over the mountains of France teaching children at out-of-the-way locales, many of them the offspring of Muslim immigrants and representing the first generation of their families that had the opportunity to get an education. Gondry travels with his aunt to important landmarks from her past, and she shows him where she taught, where she lived, and what happened there. He cuts this together with home movies and photos that show the Gondry family as they were back then, sometimes also peppering the narrative with news footage and even some whimsy. His longtime collaborator Valerie Pirson has created interstitial stop-motion animation to take the viewer from one remote village to another.

The picture that Gondry paints of his aunt is one of a strong-willed, independent woman who never backed down from a challenge. Her husband was a quiet man who did his thing and died long before his wife. He was a partner who suited her, and judging from the way she talks about him now--including one dinner table anecdote where she can barely breathe she's laughing so hard--Suzette still loves him.

Things grow more interesting and several shades darker, however, when Gondry begins to delve into the story of Jean-Yves, Suzette's son. Jean-Yves was a troubled boy who grew into a troubled man, who swallowed his dreams and struggled with his sexuality and put himself through many abuses. He dresses oddly now, and he seems barely functional. Emotionally, he's a tangle of misunderstanding and misdirection. There is a distance between mother and son. She doesn't get him, and he is too busy blaming her for what went wrong to sort things out. Jean-Yves is the thorn in his mother's heart, the one element of life that causes endless pain and irritation.

My second viewing of The Thorn in the Heart came the same week I also watched and reviewed Ben Steinbauer's Winnebago Man. It's a documentary about Jack Rebney, a YouTube sensation thanks to his angry rants in a 1980s promotional video for RVs. Here is a man who has too much emotion and no problem expressing it, and it cripples Jack just as badly as Jean-Yves' swallowed feelings cripple him. Whereas Steinbauer is unable to deal with what he finds and reshape his movie accordingly, Gondry lets The Thorn in the Heart take him where the material demands. Unlike Steinbauer, he also knows how to remove himself from the scene. Michel Gondry is a character in this story, his love for his aunt is the engine that got the whole project going, yet that love ends up being more of an ironic juxtaposition to the more pertinent relationship. Why can Suzette connect so well with her nephew when she is so out of touch with her own son? Actually, it's a bigger issue than that. How is it that she was so good with other people's children and touched so many lives? Is it that she gave too much to them and had none left for Jean-Yves? He seems to think so, but she has no interest in letting his theory overtake everything else. What is the one who was lost compared to the many who weren't?

Michel Gondry has no real answers for that either, and so he lets The Thorn in the Heart conclude even if the story does not. As with any tale of a family, it's always going to be a work in progress, the healing is only beginning. The film doesn't lose any of the tender nostalgia it started out with despite the harsh shadows it uncovered; on the contrary, Suzette reveals her belief that her nephew let the story go there because he knew it had to if they were ever to get past it. The Gondry family is no different than any family really. Some of the relatives get along, some don't; some succeed where others fail. There is no more an explanation to Jean-Yves being a screw-up than there is for his mother being an over-achiever.

All of Gondry's movies have at their core a deep affection for human nature (and, indeed, his first film was even called that, despite not being very good). Even when they are fantastical mind-benders, he doesn't lose sight of the people at the center of the story, even if sometimes his audience and critics do. The Thorn in the Heart strips away the director's tricks so that only the humanity remains, making it impossible for anyone to miss. At the same time, The Thorn in the Heart is still playful and warm, and Gondry has a strong nose for the humor of everyday life. It all interests him, and none of the good stuff escapes his watchful eye. He also has a love of movies, and his setting up a makeshift theatre to recreate a time long gone is right in line with the celebration of cinema in Be Kind Rewind. The filmmaker's exuberance and his full embrace of the full range of experence makes for a touching film, one that seems small at first, but that expands with memory and time--a truly Gondry-esque transformation if ever there was one. 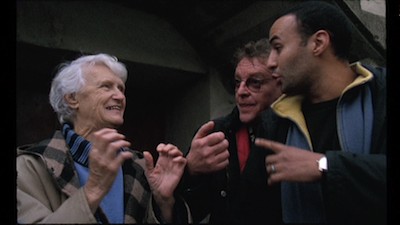 Video:
The Thorn in the Heart comes to DVD as a 1.78:1 transfer. It looks pretty good for a low budget film shot on a variety of cameras. The quality of the images varies as a result, but the transfer is consistent, with only minor interlacing and a good color palette.

Sound:
There are two mixes, a 5.1 track and a stereo track, both of the original French soundtrack. Both sound good, and honestly, you could just as easily go with either. This is not a movie with a lot of effects, so a more straight-down-the-middle audio mix is just fine.

There are optional English subtitles, and these have a nice syntax and pass at an easy-to-read speed.

Extras:
First up, something must be said for the awesome packaging job Oscilloscope did on The Thorn in the Heart. Keeping in line with their other releases, the packaging is made out of recycled paper, with an interior multi-paneled container that fits inside a sturdy outer slipcase. The whole thing is decorated with Michel Gondry artwork, and when unfolded, makes one full picture. It's super cool.

The disc itself is packed to the gills with extras. Leading the charge is "A Brief History of the Harkis." The Harkis were a group of Algerian soldiers who fought alongside of the French in the Algerian War, only to then be segregated to remote camps and forgotten when France lost the war. Many of these families had children taught by Suzette. This short piece (just over 14 minutes) explains who they were and where they came from, and at times it looks like it was actually a deleted scene, even if it isn't labeled as such. Suzette catches up with some of her students, who we also meet in the main feature, and this leads us to explore some of the ways the Harkis eventually dealt with their situation and takes us forward to France's official apology to the Harkis in 2001.

"Techno Suzette" is a quick, amusing music video using footage Suzette shot with a Super-8 camera, mistakenly believing it to be a still camera and so trying to take single pictures with it. I don't know who did the music, but it's not very good. (I know it's supposed to be a joke, but still....) Another fun music montage is "Calendar's Doodled," a year of drawings provided by kids shown in the movie, mostly drawn on calendars and looking very abstract. 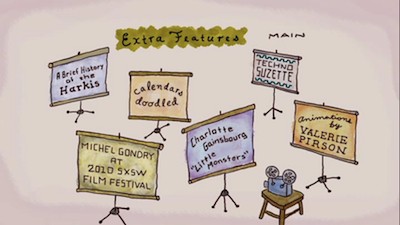 There is also a real music video of sorts, Gondry's clip for Charlotte Gainsbourg's "Little Monsters", featuring kids from the film and footage that was at least partially seen within it. The stop-motion animation created by Valerie Pirson for the movie is also isolated and shown in the bonus section on its own.

Two sequences shot at the SXSW Film Festival showcase talks with Gondry. One is a post-screening Q&A (around 11-and-a-half minutes) and another is a sit-down with an interviewer billed as "In Conversation: A Special Event with Michel Gondry" (just over 23 minutes). These allow Gondry a platform to discuss his process and his reasons for making the movie, and he shares more memories, expanding on the role cinema has ended up playing in the Gondry clan. Both segments actually feature audience questions, though the Q&A edits most of them out and has the host on stage repeat the queries instead (probably a sound issue).

There are also trailers for three other Oscilloscope releases and one for Thorn.

FINAL THOUGHTS:
Highly Recommended. Another great film from Michel Gondry, another great DVD package from Oscilloscope Laboratories. The Thorn in the Heart is a documentary feature where the whimsical French filmmaker drops his fantastical ways and instead explores his family history. Focusing on his aunt Suzette, what begins as a portrait of a remarkable woman whom he loves turns into a warts-and-all examination of the things that both connect and divide a family. It's quiet and poignant, yet also keeps Gondry's trademark playful spirit. Illuminating extras chosen by the filmmaker add even more to the experience, making The Thorn in the Heart a definite must-see on DVD. 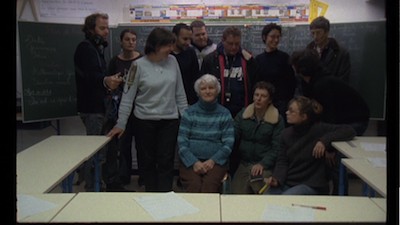