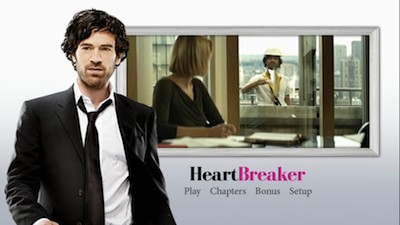 When the inevitable Hollywood remake of Heartbreaker happens, most likely with Ashton Kutcher in the lead, and less trustworthy critics than I try to show their smarts by claiming the French original is so much better, don't believe them. Instead, remember this review and remember that I called it for what it is. There is a tendency to give a movie like Heartbreaker a pass when it comes from France, because there is a clichéd notion that the French cinema industry is somehow more pure and Paris is the birthplace of all of our sophisticated artistic fantasies. See enough French films--or really, any foreign pictures--and you'll know this is rubbish. They have the same crap-to-quality ratio as the rest of us. If Heartbreaker had the stars and stripes flying over it, it wouldn't pass the smell test of a noseless hound dog. The accents shouldn't earn it an automatic clean bill of health. I'm seriously reconsidering some friends and colleauges that recommended this atrocity to me.

The skinny is this: Heartbreaker is an all-too typical romantic comedy directed by Pascal Chaumeil, who is apparently a giant in French television. It was written by three different writers, which is always a dangerous sign, though since the original idea began with Laurent Seaton (I Do), we'll lay most of the blame at his feet. The movie stars Romain Duris (Russian Dolls) as Alex Lippi, the central heartbreaker, a slick con man who earns his living by breaking up relationships where the woman is unhappy and just doesn't know it. He and his crew are usually hired by concerned friends or family members, and they set up elaborate scenarios where Alex seduces the misguided lady-types, leading up to a momentous kiss, and then slinks away, allowing the doubt and dissatisfaction to fester and surface.

The job that is covered in the bulk of Heartbreaker does not conform to Alex's usual guidelines. By all accounts, Juliette Van Der Becq (Vanessa Paradis, Girl on the Bridge) and her fiancé Jonathan (Andrew Lincoln, The Walking Dead) are the perfect couple. Juliette's father (Jacques Frantz) seems to want her to walk away for selfish reasons, and this goes against Alex's principles. Too bad Alex is in deep for his gambling debts and needs to get some quick cash. Oh, and they call him chicken. So much for principles. No one calls Alex Lippi a chicken!

The rest of Heartbreaker essentially writes itself. Alex pretends to be a bodyguard hired to protect Juliette. She resists, but then relents, and then it's one scenario after another where he attempts to woo her and fails, and this happens enough times that he ends up falling in love with her for real. There is also a climactic reenactment of the big dance number from Dirty Dancing, because it's Juliette's favorite movie and it gives the filmmakers a chance to pretend they are more high-minded than the junk they've ripped off. Oh, and a scene where Duris eats cheese that features what is perhaps the most disgusting foley ever committed to celluloid.

It's difficult to find just the right words to tell you how bad Heartbreaker is. It's not a challenge of wrestling with the proper way to dissect difficult yet flawed material, it's more the challenge of where do I even begin to sift through a garbage dump to tell you which piece of trash reeks the most. Heartbreaker is as trite and corny as it gets, the kind of romantic comedy that makes most dudes hate romantic comedies. (I am not one of those dudes; I had seen Breakfast at Tiffany's for the umpteenth time the night before screening this DVD, and I cried three times.) It's badly written, with only the most superficial emotions, empty dialogue, and worn-out slapstick. Alex's road crew, a married couple played by Julie Ferrier (Micmacs) and François Damiens (JCVD), are meant to provide humorous relief by tripping over things and wearing bad wigs and hitting people on the head, and it's easily ten times more dull than I make it sound. Vanessa Paradis is all right in the lovey-dovey hotseat, though she plays it icy and aloof, and she doesn't quite know how to shed that in order to show us the fun girl that we are told is being stifled by the forthcoming union. She's really just pretty and kind of a bitch.

And what can I say about Romain Duris? I mean, besides the fact that he needs a shave, a haircut, and an hour or two under a shower. Ladies, do any of you really find this man sexy? I'm not talking about when he plays charming and shy like in L'Auberge Espagnole. I'm talking about the unconvincing cocky swagger that he tries to pull off here. He had enough grease on him to fry burgers.

But then, that's Heartbreaker: incompetence so slick it shines. And the hope is that the residual sparkle will blind us to the fact that we've seen this all before, and we've seen it done better and with far less cynicism and laziness. Allegedly the filmmakers were inspired by Frank Capra's fast-talking classic It Happened One Night. Well, okay, I guess something did happen in this film and some of that happened at night, but there the comparison ends. Heartbreaker has none of that film's smarts or wit, and it definitely doesn't have the heart, and if Romain Duris is Clark Gable than Ashton Kutcher is Cary Grant and I'm goddamned Errol Flynn. 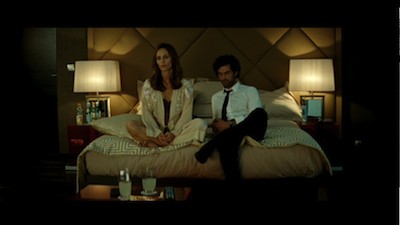 Video:
IFC releases Heartbreaker as a standard DVD with a 2.35:1 anamorphic widescreen transfer. The image quality is passable. Colors are good and there was no evidence of macroblocking or surface damage; however, there was some jagged interlacing and a general softness to the resolution throughout the run of the movie.

Sound:
The original French soundtrack is mixed in Dolby 5.1. It's a mostly full audio landscape, working all the speakers at once with only minimal subtle effects. Like a two-channel mix dressed in clothes that it hasn't grown into yet.

The optional English subtitles are solid, with easy pacing and clear language--though I don't know why they needed to subtitle even the English, including the lyrics Wham's "Wake Me Up Before You Go Go" not once, but twice. It's unnecessary. I can't be the only one who knows that song by heart, can I? There is also a Spanish track and a separate English option for the deaf and hearing impaired.

Extras:
Only a theatrical trailer and television commercial.

FINAL THOUGHTS:
Skip It. Oh, my god, should you skip it! Heartbreaker is a French romantic comedy that is as predictable and poorly constructed as any of the routinely rotten romantic comedies Hollywood pumps out on a regular basis. Jerkball dude meets frosty gal, and through a series of mishaps, she gives him morals and he melts her shell. Really? For the money they saved by not grooming Romain Duris, couldn't they have at least paid for a fourth scribe to whip the other three writers' script into shape? Or was that all spent on the stinky cheese? 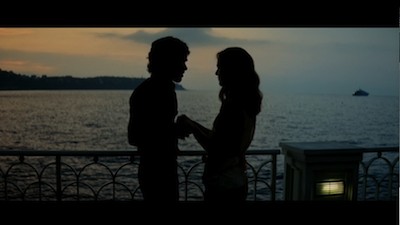