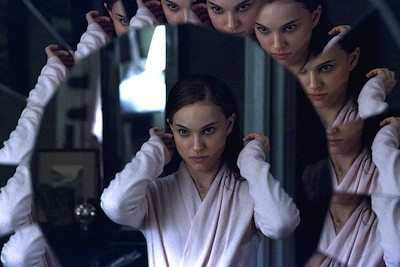 In the great game of cinematic "what if," Darren Aronofsky's Black Swan answers the hypothetical, "What if Roman Polanski had directed The Red Shoes?" It's a lesson in how to go from arctic drama to full-blown fever dream in less than an hour and forty-five minutes. As a movie, it is at first alluring, yet a little distant, waiting for the right moment to get right in your face.

Natalie Portman stars in Black Swan as Nina, a ballerina whose quest for perfection is only off-set by her timid desire. Her company is about to begin a new season, and with the ending of the old one, their aging prima ballerina (Winona Ryder, The Private Lives of Pippa Lee) is on her way out. To start off on a new foot, the company director, Thomas (Vincent Cassel, Mesrine), is going to stage a bold new take on Swan Lake. He so much as tells Nina that she'd be a shoe-in if the role only required her to be the White Swan. She has to prove she can let loose enough to be the Black Swan if she wants to be the Queen.

Joining the troupe to replace the exiting ballerina is a new dancer named Lily (Mila Kunis, Extract). Right from the start, we can see that Lily is everything that Nina is not. Her streaked hair, the tattoos, these are obvious. The more important distinction is the way she moves. Lily feels the dance, she doesn't just follow the choreography. Thomas sees it, and Nina sees it, too. That's why she tries to stay as far away from Lily as possible.

There's a lot of weirdness going on in Black Swan, and a lot of reason for Nina to feel paranoid. Her controlling mother (Barbara Hershey, Lantana) gave up her career as a dancer to have Nina, and she has an eerie obsession with the girl. Also, Lily has started to hallucinate. Weird wounds are appearing on her skin, some real and some not. She sees strange things in mirrors, and has full experiences that may or may not have happened. Is Lily the key to setting her free, or is she gunning for her part? Does her mother want to keep her on the right path, or is she trying to box her in? Is her director pushing her because he believes in her, or is he running a game to get his hand under her tutu? 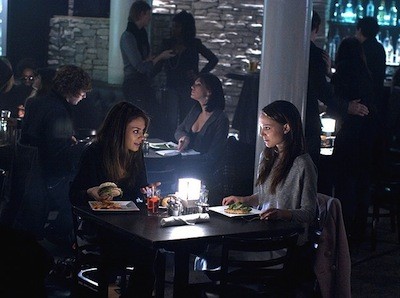 Black Swan is Darren Aronofsky's follow-up to the acclaimed film The Wrestler, and aesthetically it takes the cramped realism of that movie and melds it with the personal vision of The Fountain. What comes out of it is an amazing limbo, a nether region where everything looks real, yet nothing is as it seems. The script by Mark Heyman, Andres Heinz, and John McLaughlin, from a story by Heinz, borrows liberally from the Tchaikovsky version of Swan Lake in much the same way that The Red Shoes borrowed from Hans Christian Anderson. The ballerina's story begins to run parallel to the one she is performing. Doubles and mirrors play an important visual role in Nina's becoming unhinged. Her visions develop a grotesque tint not unlike a fairy tale--a fairy tale where the potency of dreams has dire consequences. (It's a theme that Aronofsky knows plenty about; one could argue that Nina's struggle matches his own stubborn pursuit of his art, regardless of outside interference and adversity.)

Natalie Portman is excellent as Nina. She has the physicality down perfect, but also the psychosis. This is one of those movies where you are constantly asking yourself what the character is thinking, and Portman cultivates that mystery. Nina's anxiety is overt and forceful, and her constant panting is almost infectious. Check yourself, you might find you are copying her breathing without meaning to. Mila Kunis makes an ideal foil. She is naturally warm where Portman is cold. It's inspired casting, allowing the two to play with their "types" rather than fighting against them..

The climax of Black Swan is, of course, going to be the ballet itself, and Aronofsky slowly builds to the debut. Throughout rehearsals, he shows us more and more of the performance and brings us in closer to the action. By the time the curtain goes up, we are in the thick of it. Iron Man cinematographer Matthew Libatique gets right on the stage and moves with the dancers, capturing the fire and frenzy of the dance. Aronofsky and Libatique create a gorgeous visual tableau, the audience and theatre often drifting away as Nina gets caught up in the illusion. Black Swan is an aesthetic treat, one of those movies you could turn the sound down on and just stare. That said, it's also aurally pleasing. I want to make a special note of the original score by Clint Mansell (Moon). It's not easy to distinguish yourself in a film that is centered around a famous piece of music, but the moody orchestration in the non-dance scenes is perfect for the murky atmosphere Aronofsky is creating.

By the end of Black Swan, I was thoroughly caught up in what was happening on the screen. The final act is gripping and intense. I was surprised by how much I had become entangled up in Aronofsky's dark little fable. He drew me in so carefully, I wasn't aware that I had literally moved forward in my seat, clenching my teeth in nervous anticipation. Black Swan kept me guessing straight to the end, ringing out on a frenzied crescendo and only the faintest of denouements. It's barely enough time to catch your breath...but then, that's probably what the beautiful closing titles are for. So you can sit there and regain your composure. 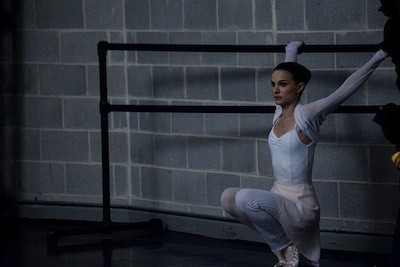