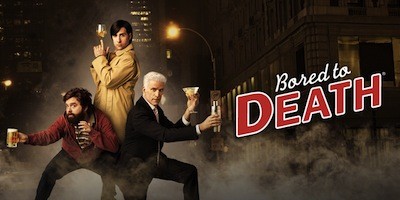 Bored to Death was a nice surprise when it joined the HBO line-up in 2009. The half-hour comedy based on the writings of Jonathan Ames starred Jason Schwartzman (Rushmore) as a fictionalized version of the author who, while in the doldrums of trying to write his second novel and dealing with the end of his relationship, posts an ad to Craigslist promoting himself as an unlicensed private detective. His goal is to find inspiration in the small cases that come his way and maybe help some people out in the process.

The first season detailed the various cases that Jonathan eventually scored, but for as witty and clever as some of those scenarios were, the true narrative core of Bored to Death emerged as the season progressed and the impressive ensemble cast began to gel. Bored to Death became as much about Jonathan's friendships as it was about his writing and his ill-advised adventures. The base trio of the show, in addition to Schwartzman, is Ted Danson as George, a magazine editor who is also Jonathan's benefactor and an up-for-anything libertine, and Zach Galifianakis as Ray, a comic book artist who is Jonathan's best friend and confidante. George and Ray share personal stories of their relationships and conquests with Jonathan, even as they are also sucked into the pulp fiction world he has invented.

Season Two opens a short time after the first cycle's finale, and the characters have moved forward a little and have further shake-ups on the way. Jonathan's second novel, a sexual farce based on the Kama Sutra, was rejected, and in addition to his intermittent detective work, he now teaches writing at night school. He is still dating his hippy pot-smoking girlfriend (Jenny Slate), but that will soon end after she tries to introduce her ex-boyfriend into the mix (Jonathan goes along with it, but she ends up dumping him). George is having an affair with his ex-wife while also trying to ride the waters of new investors imposing sweeping, cost-cutting changes on his magazine. In the first three episodes, George will experience a sharp pain in his overused penis, which will lead to his discovering he has prostrate cancer and getting into an inappropriate relationship with his urologist (Jessica Hecht).

And Ray will get kicked to the curb by his long-term girlfriend Leah (Heather Burns). In his post-dumping tailspin, he will create a comic book character called Super Ray in hopes of winning Leah back, self-publish his efforts, and achieve surprising fame. This will lead him to a night out with Kevin Bacon, underage groupies, and even a comic book convention where he is forced to confront his own stalker (a hilarious bit part played by Jonathan Ames himself). In addition to Bacon, Bored to Death: The Complete Second Season also features guest spots by Kristen Johnston (3rd Rock from the Sun), F. Murray Abraham (Amadeus), Olympia Dukakis (Steel Magnolias), Zoe Kazan (The Exploding Girl), and comedian Jim Gaffigan, as well as returning stints from Oliver Platt, John Hodgman, Patton Oswalt, and Kristen Wiig. These are all side characters that will intersect with the main cast's lives, sometimes briefly, sometimes for extended stays.

Bored to Death's comedy is situational, and thus it is, to a degree, a sitcom. Jonathan's misadventures as a P.I. are often quite silly, banking on his ineptness and unsuitability for the job, casually sending up the usual plot contrivances that plague the traditional half-hour television comedy. Ames and the rest of the creative team take this subversion even further, appropriating the cliché that most sitcom characters never change, regardless of how long the series may run. Certain tweaks may occur, but they are always the same exact "type" in the show's finale as they were in its pilot, usually even more exaggerated than they began. (Friends is always the best example of this; consider how from year to year Monica's competitive streak and her obsessive cleaning got more and more pronounced.) Bored to Death both combats this and plays with it by making their characters' inability to change into their central personal issue, and they use that to beat the sophomore slump by forcing the fellows to alter their lives. All three of these guys are just big kids living a fantasy life. Can they deal with these new curveballs and grow, or will they stay as they are? Of course, the answer is both yes and no, they are who they are and will continue to be so, but at the same time, they are affected by their surroundings and, most importantly, their relationships deepen from episode to episode.

The Complete Season Two is, overall, a more cohesive experience than the first season. The show has found its legs, and Ames' absurdist, literary humor is more comfortably actualized. It's fun watching writers and artists cavorting through an almost mythical version of New York City where people truly never sleep and just about anything can happen depending on the cross streets. Schwartzman is a charming lead, adept at capturing Ames' neurotic ennui and not afraid to take it over the top when necessary. Galifianakis is at his most restrained here, proving that his comedic stylings are probably more carefully considered than his more typical roles in Todd Phillips movies might suggest. As good as they are, though, Ted Danson pretty much rules Bored to Death. While George Christopher may be a character capable of very broad action, Danson somehow makes even the most outlandish or even cliché moment seem downright common and altogether natural. It feels like we lost Danson to a lot of junk after Cheers ended, so it's marvelous to see him show his chops both here and, of course, playing himself on Curb Your Enthusiasm. It's the kind of supporting role that can make a career for newcomers, but for a vet like Danson, just confirms that he will always be a star.

Bored to Death: The Complete Second Season is a bit short, stopping at only eight episodes, but the whole season provides a satisfying arc. The team builds to a big finish, saving their craziest material for last, and tying up most of the threads they pulled out for the early part of the season. This is the kind of thing cable does so well, and a lesson the alternative networks learned from the BBC: more focused seasons with a consistent quality level and no padding. It makes shows you are glad keep coming back, and that you can hope won't stick around longer than they should. So far, I'm not even close to being bored with Bored to Death.

Video:
HBO present Bored to Death on DVD as a 1080p/AVC-encoded high-definition transfer, shown in its widescreen broadcast ratio. The look of the discs is sharp, with vivid, realistic coloring and a strong level of detail. Hair and skin look natural, while we also get to see textures and patterns on clothes and furniture. The location shooting gives us a vivacious rendering of New York, uptown to downtown, while interiors are smartly decorated and exactingly reproduced for disc.

Sound:
The show's audio is mixed in DTS-HD Master Audio 5.1, and it serves its purpose even if the mix team doesn't go nuts with all of the effects available to them. Exterior shots could use a little more ambience--these are the noisy streets of New York, after all--but the centered soundtrack perhaps properly errs on the side of giving the dialogue the biggest seat at the table. This is a writer-driven show, and hearing the expertly delivered lines in the clearest possible fashion is really job number-one.

Extras:
The two-disc set is packaged in a foldable cardboard book with a side-loading outer slipcover and plastic interior trays. Episode breakdowns are printed on the inside. It's nice to see the packaging design, as well as the disc menus, incorporating the art of Dean Haspiel, who draws Ray's comics in the show and who is also the character's inspiration.

Five of the eight episodes include audio commentaries, all of which feature Jonathan Ames and Jason Schwartzman--including the duo going solo on the series finale. Director Michael Lehmann joins them for two of the commentaries, while director Alan Taylor jumps in for episode two. Taylor's and the finale are the only ones without Ted Danson, and his appearance on the other three are as much a highlight of these alternate audio tracks as his performance on the show. Fans of the series will enjoy these commentaries, as the lively discussion gives insight into how the material is put together and the obvious fun these folks have making it happen.

Jonathan Ames is also featured on the twenty-minute collection "Inside the Episodes," providing added explanation about each show.

There are three deleted scenes, which are actually pretty funny, and also a five-minute outtakes reel.

All extras are in HD.

FINAL THOUGHTS:
Highly Recommended. It's another winning collection for HBO. Bored to Death: The Complete Second Season improves on the stellar debut, solidifying the wit and humor of Jonathan Ames' literary world. Driven by a strong central cast--Jason Schwartzman, Zack Galifianakis, and the unstoppable Ted Danson--Bored to Death is a mature, subversive redo of the classic thirty-minute sitcom. It lovingly sends-up detective stories while mining more emotionally rich material from the lives of its core characters. A wholly satisfying laugh fest.