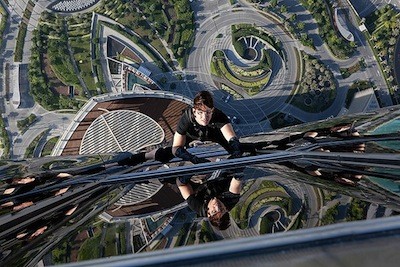 When it comes to high-numbered, big-budget sequels, as a collective audience, we have grown used to diminishing returns. Once a franchise has gotten past the trilogy stage, if it's even remotely viable as a creative property, it's hard not to be suspicious that the filmmakers will go back to the well one too many times. At some point, it becomes just about making money; good moviemaking is secondary.

So, when a fourth movie not only delivers everything you want, but also improves on what has come before, it's a rare and wonderful thing. That Mission: Impossible - Ghost Protocol is the best of its series isn't necessarily saying much given the debatable quality of the first two entries, but that it's one of the best action movies of the last several years is certainly saying something. You're definitely not going to find a more nail-biting thrill ride to get you through the winter.

Tom Cruise returns as Ethan Hunt, the most capable agent in the Impossible Mission Force, a covert U.S. agency operating on the international theatre. At the start of the movie, Ethan is in a Russian prison, and his bosses have prepared an early release so their top man can deal with a more pressing threat to world security. The jailbreak is just the first of many dizzying, inventive action sequences, a combination of ingenious cons, acrobatic fighting, and daring games of chance. Ethan's new team is a tough lady (Paula Patton, Precious) with a few things to learn and a tech expert (Simon Pegg, reprising his role from Mission: Impossible 3) whose experiments don't always come off. Together they are supposed to infiltrate the Kremlin and uncover the true identity of a dangerous agent codenamed Cobalt (Michael Nygvist, from the Swedish The Girl with the Dragon Tattoo). Cobalt has gotten his hands on Soviet nuclear launch codes, and now he just needs a few illicit toys to instigate Armageddon. 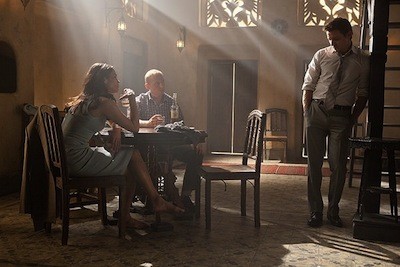 Needless to say, the team's first encounter with Cobalt turns into a disaster. So much so, the IMF is disbanded and Ethan and the gang are branded terrorists. They have to operate off the grid, taking along a company man they don't really know (Jeremy Renner, The Hurt Locker), dodging beautiful French assassins (Léa Seydoux, Midnight in Paris), and eluding Russian secret service (Vladimir Mashkov, Behind Enemy Lines). Cobalt will lead them on a chase through Dubai and over to India, and it's hard to tell who takes a bigger beating on the way: Ethan Hunt or all the cars that get crashed everywhere he goes.

To say what I have described is just a small portion of the plot is an understatement. Mission: Impossible - Ghost Protocol is so full of crazy twists and turns, it would be impossible to spoil any of it for you. I neither have the space nor the memory to outline all that goes on in this nonstop chase. Which is as it should be. Once Mission: Impossible - Ghost Protocol gets started, it never stops. Screenwriters Josh Appelbaum and André Nemec (TV's October Road and Alias) build a suspenseful, complicated scenario for the IMF team, only stopping to breathe every so often and insert a few character moments and motivating factors to make these guys more than just human weapons. Patton is alluring and bruised as Jane, while Pegg and Renner each provide appropriate comic relief. It's actually nice to see Jeremy Renner play a more laid-back role. He still gets to be a bad ass, but he's soft on the inside, too.

For his part, Tom Cruise once again proves why he's a star. It's easy to take a hard line against an actor of his stature, but he's had the success he's had for a reason. As a screen presence, he is charismatic, working naturally within the frame while also taking a risk or two when it's required. Perhaps the biggest testament to his comfort in the lead, however, is his willingness to surround himself with good people. It would be easy to shine while showboating on a lesser team, but as a man with two credits above the title--producer and star--he picks a great crew to appear both in front of the camera and behind it. Just think of the directors he has hired for the Mission: Impossible franchise: De Palma, Woo, Abrams. Frankly, he's done better since he stopped picking celebrated veterans and switched to newer hotshots, as confirmed by the quality of Abrams' effort and now Ghost Protocol.

The director of Mission: Impossible is an inspired choice. Brad Bird has previously only worked in animation. His distinguished filmography includes The Iron Giant, The Incredibles, and Ratatouille. As a director, he makes the transition from cartoons to live action flawlessly. Bird brings the same vitality to Mission: Impossible - Ghost Protocol as he did his previous endeavors, and if you pardon the pun, Mission: Impossible is all the more animated for it. Not only does Ghost Protocol top the franchise installments that preceded it, but the movie consistently tops itself. Each action scenario is more hairy, more dynamic, and more exciting than the last, building to a crescendo of violence that takes place in three separate places at once. If you can, see Mission: Impossible - Ghost Protocol at an IMAX theater. Bird uses the larger scope to exhilarating effect. This is a big movie, and you need to see it big to get the full impact.

So, yeah, who'd have thunk it? Fourth time is a charm! Mission: Impossible - Ghost Protocol is a scorcher with enough heat to melt any wintertime movie doldrums you may be experiencing. It's one sequel that is easily everything you want and more. 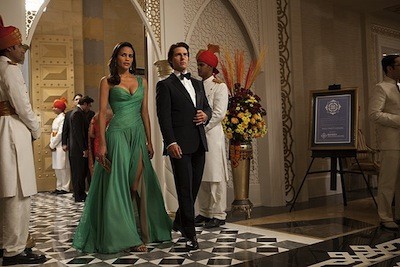