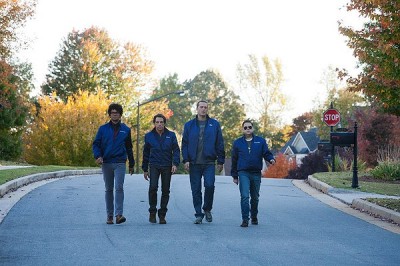 It's hard not to be sad while enduring The Watch. It's not because the movie is sad, it's actually supposed to be a comedy. It's because it's depressing to watch so many talented people performing with such desperation. Everyone involved is dying to make you laugh, but they seem to have forgotten everything they know about how to get it done.

To save whatever remaining dignity any of the folks caught up in this mess may still have, let's spend as little time on this as possible. The Watch is about four men in suburban Ohio who, after one of them loses a friend under mysterious circumstances, form a neighborhood watch to find his killer and keep him or her from killing again. Unsurprisingly, these guys aren't very good at their chosen mission. They are led by Ben Stiller, who is uptight both at work and at home, the exact opposite, of course, of fellow alpha male Vince Vaughn, who likes beer, big TVs, and, surprisingly enough, his teenage daughter. Joining them are overzealous head-case Jonah Hill and nice British fellow Richard Ayoade (known to fans of The IT Crowd as Maurice, also the director of the excellent Submarine). The unlikely quartet bond, and whilst on patrol, stumble on a real threat: aliens killed Ben Stiller's friend and now they live among us.

That's the long and short of it. The Watch is the directorial debut of Lonely Island member Akiva Schaffer. The Lonely Island is the team responsible for the SNL Digital Shorts, and the quick cameo by all three of the Islanders is one of three things that are actually funny in the movie. The other is a gag involving blister packs. Together, they both last about a minute. The third is Will Forte as a local police officer who gives the watch guys a hard time. Everything Will Forte does is funny. We really need a MacGruber 2 instead of junk like this. Why squander the Forte?

The Watch is a lopsided movie full of lazy humor. The narrative never stays focused on the task at hand, taking long detours into male bonding and various family matters. Ben Stiller is impotent, Vince Vaughn's daughter likes boys. Boo-hoo. Schaffer seems awed by both Vince Vaughn and Jonah Hill and lets them run on way too long with their ad libs, most of which involve penises, bodily fluids, and the like. When that's not working, he likes to shoot the guys in slow-motion acting tough and cut in some gangsta rap. Memo to all filmmakers: we're no longer impressed by juxtaposing nerdy white guys with hardcore hip-hop. In fact, it's so not funny, it's borderline racist, and here it adds nothing to The Watch's sci-fi comedics. Neither do the frat boy antics, like posing for raunchy photos with alien corpses. I felt like I was watching a Todd Phillips remake of Paul.

Which may not be far off the mark. Seth Rogen, the voice of the alien in Paul, is one of the credited writers here, along with his partner Evan Goldberg. The Watch seems like something they came up with while getting stoned on the set of that much funnier movie, and so they spliced together some of Rogen's leftover improvs and called it a script. The other credited writer, Jared Stern (who apparently was the original scribe, not the script doctor), was previously responsible for Mr. Popper's Penguins. I never saw it, and based on the evidence provided, that's probably a good move.

The Watch is clumsy, unfocused, and uninspired. It's also aggressively unfunny. Look for good times elsewhere. 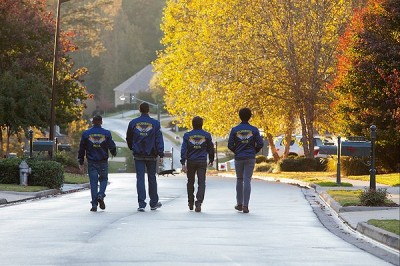