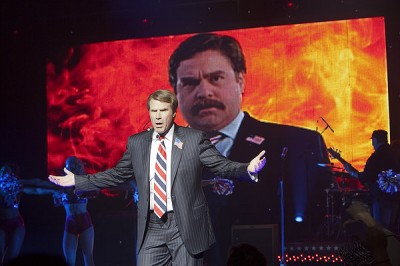 Legend has it that many a Will Ferrell movie was made based on a pitch like, "Will Ferrell as a NASCAR driver" or "Will Ferrell Basketball Project." If such is the case, then The Campaign is "Will Ferrell the Congressman." If that's not enough for you, though, the higher concept is "Will Ferrell and Zach Galifianakis compete to be Congressmen." You can see why someone plunked down some cash to get this thing made.

And it's an investment that mostly paid off. While The Campaign is pretty spotty in terms of narrative storytelling, no genre can quite survive a flaccid plot so well as a comedy. As long as they keep you laughing, you're not likely to notice that the rest of it is bunk.

Ferrell plays Cam Brady, a four-time winner in North Carolina who is running for a fifth term unopposed. Though the comedian brings the arched eyebrow that made his George W. Bush impression generally pretty hysterical, his performance here is more like Bill Clinton unleashed. Cam has a rakish charm and, like most Will Ferrell characters, a confidence that exceeds his abilities. Indiscretions with a stripper lead to Cam losing likability points and moneyed puppet masters to question his continued usefulness. Dan Aykroyd and John Lithgow play the Motch Brothers, a thinly veiled skewering of the Koch Brothers, two rich jerkbags who buy their way into political decisions they require if they want to rake in eve more obscene amounts of lucre. In this case, North Carolina has some prime real estate where they hope to relocate some Chinese sweatshops. 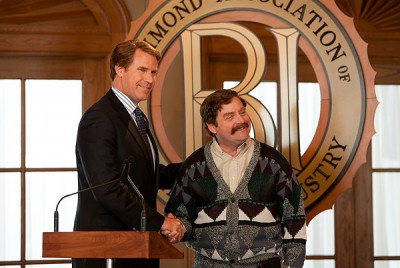 Sensing they need a new patsy, the Motch Bros. decide to back the son of one of their former colleagues. Marty Huggins (Galifianakis) may be the odd duck in his family, but if he bears even a passing resemblance to the rest of the flock, he might still serve a purpose. The old, rich, white dudes pump a bunch of money into a campaign and send a Faustian campaign manager (Dylan McDermott) to makeover the effeminate eccentric and his family. Before the blood can even dry on their unholy pact, this svengali has recast Marty as a man of the people and coached him in the fine art of dirty politics.

The Campaign is directed by Jay Roach (Meet the Parents) and written by Shawn Harwell (Eastbound and Down) and Ferrell-mainstay Chris Henchy (Land of the Lost). It is best when it is going for the jugular. Little more is needed here than to let Ferrell and Galifianakis have a go at one another, no-holds-barred. Galifianakis' off-center, swishy Southern demeanor provides perfect contrast to Ferrell's bluster. They ping-pong the insults back and forth, playing separate but complementary angles, and the banter generates a dependable string of big laughs. Both performers are experts at taking it too far, whether that "too far" involves getting crude or finding the right awkward moment in any given situation. When backed by a solid cast, which also includes Jason Sudeikis (Horrible Bosses) and Brian Cox (Adaptation), there's no stopping them.

Except, well, when the script deviates from what they do best and tries to make a point. The Campaign fancies itself as a satire on the current state of American politics. PACs and Super PACs, attack ads, town hall meetings, lobbyists--these all come up in the course of the movie. Too bad the critiques are more obvious than they are sharp. Though the political parody feels more at home here than it did in 2010's The Other Guys (a.k.a. "Will Ferrell Buddy Cop Movie," and also written by Henchy), when Ferrell and Adam McKay tried to tie the financial meltdown to their rudimentary crime plot, it comes off as even more toothless in The Campaign. The shots it takes are cheap and easy. We all know too much money is ruining politics, yet The Campaign fails to highlight the corruption and buffoonery in any interesting or new way. (It also doesn't help that Lithgow and Aykroyd are both terrible as the Koch stand-ins. Where are Don Ameche and Ralph Bellamy when you need them?) 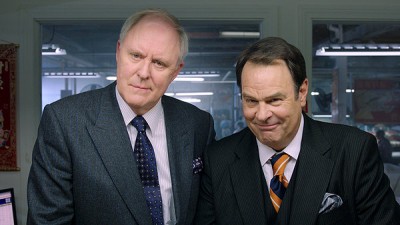 It's not that I feel The Campaign shouldn't have pursued politics, but if Roach et al. were going to go for it, then they should have really gone for it. For as funny as the movie is, it largely plays it safe. Why not go absurdist with it, a la Anchorman? The farther you go out on the limb, the more shots you can fire back at the cowards down on the ground.

Even so, The Campaign is well worth the ticket price. The laugh ratio is strong enough, it doesn't matter if the big picture stuff doesn't have the necessary juice. It's also a comedy where the best material isn't in the trailers. For one, you get way more pug time than the brief glimpse of Marty's pets in the teaser, and pugs are always funny. Two, that bit where Ferrell punches the baby is way funnier when you see the knuckles connect. And that's just the start of the list. Consumers are always encouraged to vote with their dollar, so consider casting your weekend box office toward The Campaign. 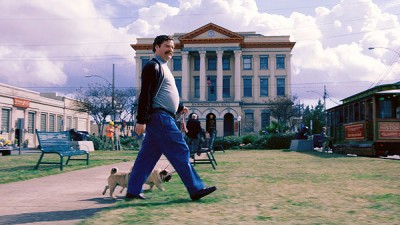