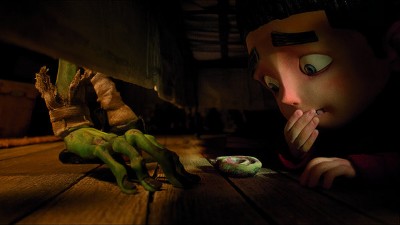 Upstart animation studio Laika struck big first time out of the gate with their stop-motion adaptation of Neil Gaiman's Coraline. Now they are back with their second feature, sticking to spooky territory for ParaNorman. No source material this time, for their sophomore effort the animators have decided to generate their own story. The outcome is good, though maybe not as good as it could be, showing some growing pains as the creative collective work out a few kinks.

ParaNorman is set in Blithe Hollow, an invented New England town that continues to make bank from an ancient story about a witch who hexed the village three centuries ago. The local lore says that she cursed her persecutors to an undead existence, and if legend is to be believed, they will rise up and attack the townspeople if the curse ever comes to fruition. It's in this weird environment that Norman Babcock (voiced by The Road's Kodi Smit-McPhee) has somehow managed to get himself branded the weirdest of them all. People think something is wrong with the kid because he claims to see ghosts. His dead grandmother (Elaine Stritch, 30 Rock), for instance, is still in the house, and she and Norman regularly converse. It's enough to earn any kid a wedgie.

Things get more bizarre for Norman when his outcast uncle (John Goodman, The Big Lebowski) tells him that the reason the rest of the family has always ostracized him is he can see dead people, too. Apparently crazy ol' Uncle Prenderghast has been the one thing standing between the witch's curse and the good people of the Hollow, and when he dies, he gives Norman instructions on how to keep the witch in her grave for another year. Only Norman doesn't get the incantation quite right, and before you can say "Braiiiiins," zombie versions of long-dead Puritans are chasing him. Going along on the mission to reverse the curse are Norman's one friend, a picked-on fat kid named Neil (Disney Channel-mainstay Tucker Albrizzi); Neil's jock brother (Casey Affleck, Gone Baby Gone); the school bully (Christopher Mintz-Plasse, Superbad); and Norman's airhead sister (Anna Kendrick, Up in the Air)--none of whom can really believe what they see. 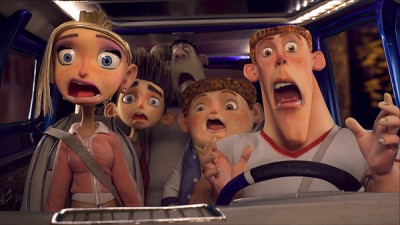 The ParaNorman script by Chris Butler, who also co-directed the feature with Sam Fell, has some good fun playing with the horror genre. The movie opens with a very funny parody of low-budget zombie flicks, and there are nods to John Carpenter's Halloween and other tales of ghosts and the undead. These tropes are crossed with a fairly typical story about odd kids, bullies, and the pecking order of growing up. It's nicely put together, with a fairly solid story that goes for both action and humor. The jokes land about half the time. When they do, they are really funny; when they flounder, it's because they are as cliché and predictable as the stock characters that surround Norman. The townspeople are lazy, overweight, and stupid. The one prominent African American is a sassy lady cop (voiced by Tempestt Bledsoe, a.k.a. Vanessa from The Cosby Show). About the only bit player that managed not to be a total stereotype was the drama teacher, who was a dead ringer for my own high-school theatre coach. It's uncanny.

Where ParaNorman really falters, though, is when it gets serious. The emotional core of the movie is lacking development. Characters inexplicably change motivation at the turn of the third act, and the big climax gets ultra preachy. The cracks really show in the writing in Norman's big speech, when you hear every offhand line from the first 60 minutes of the movie strung together in one extended monologue. Okay, we get it: it's good to be yourself and bad to be a bully. 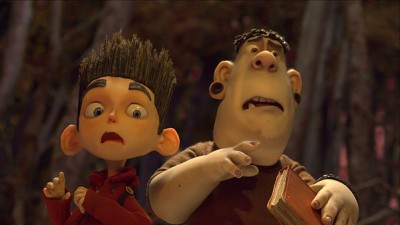 Thank goodness that the basic outline of the narrative is solid enough that the animators can prop up their fine work against it. ParaNorman is an absolute treat in the visual department. The character designs are excellent, and the backgrounds are littered with the kind of exacting detail that the screenplay otherwise lacks. There's a gag in the movie about Neil freezframing his mother's aerobics videos, but really, ParaNorman is the one you're going to want to own on Blu-Ray so you can pause it and pore over the art direction and all the props. The stop-motion work is excellent, and on par with any of the best contemporary digital animation. (Be sure to sit through the end credits for a tag-on showing Norman coming to life.) Even the 3D is used nicely, taking full advantage of the multi-dimensions of the handcrafted models.

Looking back at my review of Coraline, actually, I realize that much of what bothered me about ParaNorman is also what made me less than enthusiastic about his big sister. The movie is too slow in its pacing, too even in tone. When Norman finally meets the witch, it looks incredible, but since his solution to the whole curse is to talk her ear off, there's not much to get excited about, much less be scared of. I was mostly bored by the time we got there. Had Butler and Fell ramped up the action, maybe thrown in a few frights, ParaNorman could have been a pretty awesome animated picture. Nevertheless, it's a good try, and ParaNorman is a movie I mostly liked even if I didn't love it. Here's holding out hope that Laika's third effort will be more charmed. 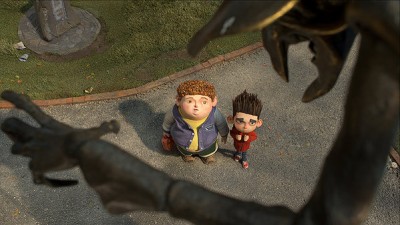