Paramount // Unrated // December 11, 2012
List Price: $36.98 [Buy now and save at Amazon]
Review by Stuart Galbraith IV | posted January 4, 2013 | E-mail the Author
Gunsmoke, the long-running television Western (20 years plus later TV movies extending it another 19 years!), underwent a big change in 1961 when, at the beginning of its seventh season, the show expanded from 30 minutes to a full hour. As noted in my review of The Sixth Season, Volume 2, there was a trend toward this kind of thing among prime-time network shows in the early 1960s, with Alfred Hitchcock Presents/The Alfred Hitchcock Hour and the expanded Twilight Zone, also CBS shows, being the most obvious other examples.

Those longer running times caused both shows to suffer, particularly Twilight Zone which for its stories was perfectly suited to episodes running about 25 minutes minus the commercials. Before switching back to a half-hour for its fifth and final season, 18 hour Zones were produced but of those only two could truly be considered excellent. Most of the others were weak and felt padded.

Unexpectedly, Gunsmoke actually benefits enormously from the switch, at least judging by these earliest hour shows. (Gunsmoke stayed an hour program for the next 13 years, until its cancellation in 1975.) Everything that was good about the half-hour Gunsmoke has been retained, while the longer running times allow for more complex stories, additional continuing characters, and far richer characterizations. I was expecting the series to drop a peg or two quality-wise but, truly, here's it's as good as ever.

This volume, The Seventh Season, Volume 1 includes the first 17 episodes of the 1961-62 season, spread across five discs instead of the previous sets' three. Sponsor material and, for the first time, preview trailers of next week's episodes are included (on about one-third of the shows). 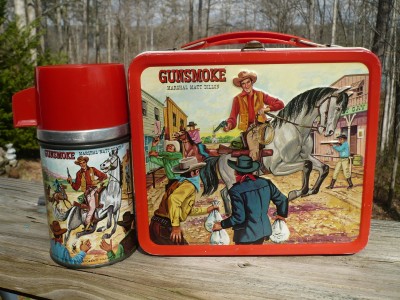 Many of the shows included in this set are outstanding. An excellent example of the hour format working to Gunsmoke's advantage is "Long, Long Trail," written by Kathleen Hite. It's a great script, a kind of mini-Westward the Women, with Matt accompanying a Boston-bred pioneer, Sarah Drew (Barbara Lord, in an Emmy-worthy performance), on a particularly treacherous journey from Dodge to remote Fort Wallace to meet her fiancé, whom she's known since childhood. She impresses him with her determination, stamina and, ultimately, great bravery. The added running time allows for deeper characterizations including a nice vignette for character actress Mabel Albertson as a hardened prairie woman, and even a little back story for Matt Dillon - the audience learns he became a cowboy at the age of ten. Together they face a relentless and surprisingly violent onslaught of every hazard imaginable: a prairie fire, hostile Cheyenne, life-threatening injuries, material more familiar to Larry McMurtry's Western novels than the average 1961 TV oater. By the end of the episode one really cares about Sarah, and the subtle, mostly unspoken hint of romance between she and Matt is eloquently expressed. (Almost bizarrely, Lord seems to have retired from television work immediately after this episode. However her son, Patrick Warburton, is presently quite active.)

The season opener, "Perce," is another excellent show (and scripted by Meston), with Matt meeting the mysterious title character (Ed Nelson) on the prairie shortly before Perce saves Matt's life from several hostile gunfighters. Later, Perce admits he's an ex-con himself and struggles to find work in Dodge until Matt helps him out. (This also hints to Matt's murky past when, it's implied, he was briefly an outlaw himself.) But then Perce falls for a manipulative, gold-digging prostitute (Norma Crane) who'd rather see him return to his more profitable if crooked ways. Though a familiar story, like "Long, Long Trail" it unfolds leisurely and methodically, with the audience soaking up Nelson's character, with Matt and the other residents of Dodge sizing him up. The episode ends quite dramatically; when it was over I think I actually said "Wow," out loud, to myself.

Gunsmoke looks exceptionally good on DVD. Shows are a bit overly grainy (especially during the opening titles, reworked slightly for syndication) but otherwise they're very sharp, very clean. The 17 black-and-white episodes are spread over five discs, with a total running time of about fourteen hours and 19 minutes. The Dolby Digital mono (English only) is clean and clear, and the shows include optional English SDH subtitles. The packaging allows viewers to read the episode descriptions inside the snap case without having to remove any of the discs.

Technically, the Gunsmoke expansion was only partially successful. The ratings actually dropped, from the Number 1 prime-time show with a 37.3 rating to the Number 3 show (behind Wagon Train and Bonanza) with a 28.3, though it did extend CBS's dominance over Saturday nights to 11:00. (Gunsmoke followed Perry Mason, The Defenders, and Have Gun - Will Travel; not a bad evening's entertainment.) More significantly, the quality of the show not only doesn't suffer, it's as good as ever. A DVD Talk Collector Series title.