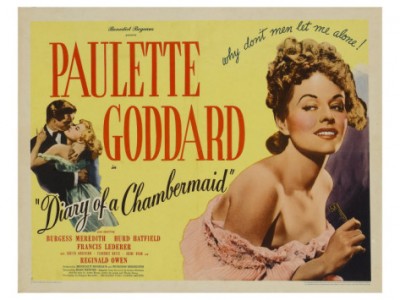 Jean Renoir was entering a rather fallow period when he adapted Octave Mirbeau's novel Diary of a Chambermaid in 1946. He had been in America for several years, but his output had been spotty. This film followed the rather excellent rural drama The Southerner, but he'd make only one movie between Chambermaid and The River in 1951, which signaled a bit of a creative resurgence. The French director never really made a bad picture, as far as I've seen. He always knew how to cut together a compelling mis-en-scene. Yet, there were dips in his excellence, and Diary of a Chambermaid was definitely one.

Paulette Goddard (The Great Dictator) stars as Célestine, a servant who has just been hired by a wealthy family to work in their mansion just outside of Paris. At the start of the picture, she witnesses one of her co-workers, the head man of the household, Joseph (Francis Lederer, Pandora's Box), being cruel to another maid (future Beverly Hillbilly Irene Ryan). It's there and then that Célestine decides to stand up for herself. She's tired of being pushed around while taking care of others. She decides she would rather be a rich man's mistress instead.

What follows are Célestine's misguided efforts to court different men. First the master of her new house, Captain Lanlaire (Reginald Owen, Mrs. Miniver), who it turns out has no money of his own, and then their neighbor, Captain Mauger (Rocky's Burgess Meredith, who also co-wrote the script). The old soldier next door is an eccentric henpecked by his maid, who refers to her boss as "Baby." Both men make fools of themselves trying to prove they can still compete for the affection of a young beauty.

Once the senior citizens are out of the running, Célestine turns her attentions to the prodigal Lanlaire son, Georges (Hurt Hatfield, The Picture of Dorian Gray), the black sheep of the family. He has been away for some time and his adventures have taken a toll on his body. The young man's mother (Judith Anderson, Rebecca) thinks that Célestine's attentions could sway Georges to remain at home. They fall in love, but he is fickle and often overtaken by dark humors. More persistent is Joseph, who has plans of going to Cherbourg and opening a café once he has the cash. He wants Célestine to go with him. She agrees, and her eagerness will ultimately push Joseph to seek the remaining capital by less-than-legal means. 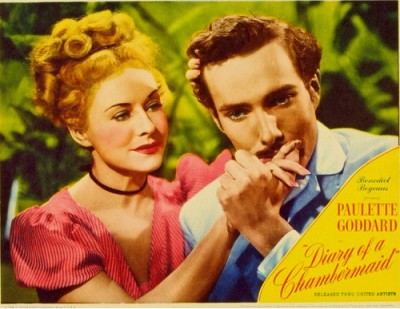 Diary of a Chambermaid is a decent film. It has an average script helmed with a better than average eye for detail and construction. Renoir attempts a looseness of tone, vacillating between broad comedy and the heavy breathing of lust and romance. Neither element really dominates, and I was kind of left wishing he'd either settle on farce or melodrama. There's also something a tiny bit depressing about seeing the great social satirist who gave us The Rules of the Game defanged by the political climate of wartime Hollywood. There is an undercurrent of class warfare that weaves throughout Diary of a Chambermaid, and not just in terms of the emergent new republic giving voice to the servants. The Lanlaires represent the bourgeoisie whose customs and privilege are becoming passé, whereas Mauger is a self-declared liberal. Yet, this clash comes off as toothless for most of the picture, and then is all but decimated by the ending, when the upwardly mobile working man, Joseph (played with steely menace by Lederer), is shown to be a callow villain.

Lederer is not the only one who turns in a solid performance. Meredith--who was a triple-threat that produced the film, as well--clearly has relish for the material, and that passion translates onto the screen. Hurt Hatfield is also quite convincing as the tortured, Byronic hero. The only real weak link, it pains me to say, is Paulette Goddard, who runs a pretty flat line throughout, delivering her dialogue with a shrill enthusiasm that grows increasingly grating. Actually, the whole of Diary of a Chambermaid is overly loud. I found myself regularly turning down the volume whenever Michel Michelet's orchestral score took charge of the proceedings.

I know that most of the above is largely negative, which is unfortunate, because I still basically liked Diary of a Chambermaid. There are many marvelous sequences here. The fights between the two aging Captains are funny and pathetic, reaching their nadir when an eager Mauger thinks he has won the girl from his enemy, and in his overzealousness, ends up suffering a premature, somewhat literal "little death." The film's climax is also an extraordinary example of Renoir's ability to orchestrate a crowd. The final brawl in the town square is masterfully choreographed, bringing all the preceding drama to a dangerous head.

It's just too bad that the rest of Chambermaid could not generate as much energy. Renoir aficionados will still want to see this, but it's perhaps best when paired with Luis Bunuel's superior 1964 remake with Jeanne Moreau. The Spanish director's savage pranksterism gives his version the edginess Renoir's lacks. Film geeks will enjoy comparing and contrasting the two much in the same way we do with Renoir and Akira Kurosawa's dueling Gorky adaptations, The Lower Depths.

Video:
This presentation of Diary of a Chambermaid makes decent use of what appears to be a rather dilapidated source. The black-and-white image, shown at a 1.37:1 aspect ratio, showcases a fair balance between light and dark and features fine resolution throughout. It does, however, still bear the marks of surface damage, with scratches and marks on the print appearing intermittently throughout the feature. Even with its problems, this Blu-Ray is easily ten times better than the faded VHS version I saw nearly a decade ago.

Sound:
The mono soundtrack also suffers from some less-than-ideal sourcing. As noted above, Diary of a Chambermaid is often a loud movie, and as the volume increases, there is a slight, yet harsh, distortion that creeps into the low end. That said, dialogue is clear and always easy to discern.

FINAL THOUGHTS:
Recommended. Diary of a Chambermaid is far from Jean Renoir's best, to be sure, but it's still a Jean Renoir picture and thus still has enough going on to make it worthwhile. Specifically, we get an excellent supporting cast and some fantastic individual scenes that, together, do their best to make us forget Paulette Goddard's off-note performance and the general tepidness of the plot itself.