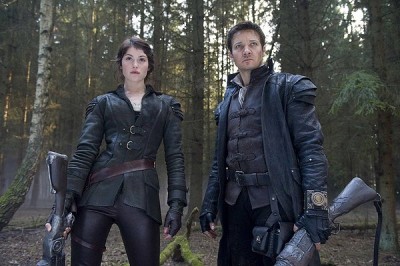 It'd be easy to dismiss Hansel and Gretel: Witch Hunters. It sat on the shelf for something close to a year, only to be discarded in the January wasteland, a time when studios are notorious for dumping write-offs into the cinematic miasma. As a concept, it comes across as a bean counter's focus group conclusion. A film Jeremy Renner made when he was just getting hot, after The Hurt Locker but before The Avengers. In other words, before Hawkeye's butt become a tumblr sensation and he could use a collection of animated .gifs as a bargaining chip.

But to succumb to such cynicism is to do yourself a disservice. Is Hansel and Gretel: Witch Hunters a good movie? Probably not. At least not in any way that is defensible by regular critical standards. Try to do a book report on this one, and you'll flunk your class. Is it a hell of a good time? Absolutely so. Unabashedly so. That's all it wants to be: your best night out at the movies ever. This movie doesn't want to marry you, but if you shut up long enough to get its clothes off, there's a good screw just waiting to happen.

The aforementioned Mr. Renner stars as Hansel. His sister is Gretel, and she is played by Gemma Arterton (Tamara Drewe, Clash of the Titans). Ms Arterton is an achingly gorgeous woman. She's also inarguably badass. She has the first tough-guy line in Hansel and Gretel: Witch Hunters. She's the first to pull her gun. This isn't a movie where the hot redhead plays a wilting flower or dies an ignominious death as a male-fantasy pun. (You know, like Gemma Arterton in Quantum of Solace.) Rather, this is a 3D Lie-max fantasy adventure where a brother and sister duo turns a childhood drama into a full-on career. Hansel and Gretel travel the countryside of whatever sorta medieval era they live in killing witches. Their latest assignment is in a backwater burg where bad ladies are stealing children and preparing for a particularly nasty ritual. They are led by X-Men heroine Famke Janssen. For an evil villain, her role is underwritten, but that's strangely a virtue in a film that is as over the top as Hansel and Gretel: Witch Hunters. Subtlety is a word that, in their past, has not been invented yet. 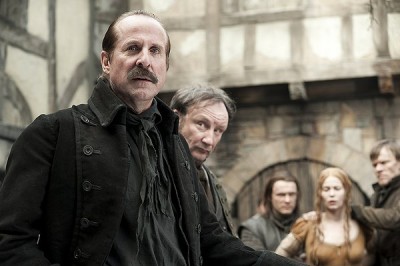 And for as ridiculous as that is, there is so much to enjoy in Hansel and Gretel: Witch Hunters, the most ridiculous thing of all would be to cross your arms and get all politically correct and ask why you just saw a pair of breasts. Or an exploding head. Or any number of stupidly wonderful things. Written and directed by Tommy Wirkola (Dead Snow), Hansel and Gretel: Witch Hunters is completely lacking in pretensions. Instead, it digs into this high concept with a gonzo sense of humor. There are great gags, applying modern conventions to a fairy-tale world. Wirkola puts his own spin on everything from the missing child on a milk carton to a taser. They are armed with a vast array of pseudo-steampunk gadgets that would have saved many a helpless maiden in a Grimm Fairy Tale. Where the many outlandish weapons the brother and sister duo employ in their deadly occupation keep coming from doesn't matter. Which would you prefer? A movie where every object is vetted for period accuracy, or one where Gemma Arterton has about a million different crossbows that kill old crones in a million different ways? In 3D!

In terms of acting, everyone here is in acutely aware of the prank. Renner is clearly having himself a blast cutting loose as the less-serious Hansel, while Arterton embraces Gretel's dogged determination as a character-plus. She takes no shit, and she hands out plenty. Peter Stormare proves the supporting MVP, surprisingly delivering the least ludicrous of two performances this month. He's not as a tantalizingly evil as in The Last Stand, but he's still a perfect match as the sheriff in this off-kilter universe.

At times Hansel and Gretel: Witch Hunters comes across as a demo for a video game. At other times, you can see the intended tent pole for this franchise fall down and go boom. For the most part, though, it's easy to cheer these overly close siblings undertaking a mission they neither question nor really understand. He drinks, cracks jokes, and charms the ladies; she wrestles with meaning and then punches it in the face. That's all you need to know, and it's enough to frame a party around. Surprise! You just RSVPd to Hansel and Gretel: Witch Hunters. 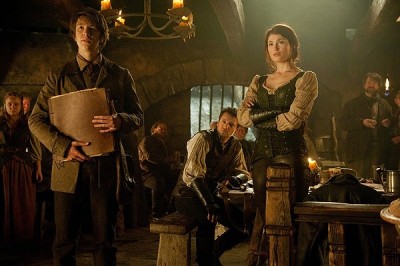