Paramount // Unrated // February 5, 2013
List Price: $36.98 [Buy now and save at Amazon]
Review by Stuart Galbraith IV | posted March 1, 2013 | E-mail the Author
Gunsmoke returns for the second-half of its seventh of 20 seasons, the first season in which Gunsmoke had switched from a 30-minute to 60-minute show. Watching these episodes, the benefits and occasional drawbacks of this format change become apparent. You'd think, for instance, that the already grueling schedule of 34 half-hours per season would only double the workload with Gunsmoke expanded. Instead, the longer running time is wisely seized by its writers as a means to enrich its one-off guest characterizations, typically pairing them with one of Gunsmoke's regular cast members, and which in turn often results in Marshal Matt Dillon and others sometimes making but token appearances. When it's done right, as it is here most of the time, Gunsmoke is richer than the earlier half-hours.

This volume, The Seventh Season, Volume 2 includes the last 17 episodes of the 1961-62 season, spread across five discs instead of the previous sets' three. Sponsor material and, for the first time, preview trailers of next week's episodes are included, but only on four of the episodes in this set. 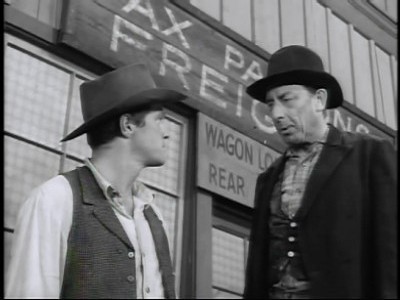 As noted above, more and more the episodes tend to focus on one of Gunsmoke's regulars or guest characters, with less emphasis on Matt than in the past. "He Learned About Women," for instance, is almost exclusively a Chester story, his character taken hostage by a gang of cutthroats. Attempting to escape, he and the outlaw leader's girl (Barbara Luna) fall in love. Another good episode, "Half Straight," follows a would-be gunman's (John Kerr) efforts to build a new life for himself after falling in love with a local girl (Elizabeth MacRae). Matt's in these shows, just not as much as in the past.

Occasionally, some truly outstanding episodes result. I've not been able to view every single Gunsmoke up to this point, but "The Gallows," is certainly the best I've seen so far, a genuinely powerful show that also gets to the root of Matt's unique appeal, that Dodge's great moral quandaries all funnel through his office, so to speak, and that he must absorb, Christ-like at times, the sins of others to maintain law and order. (Spoilers follow): In a typically long first act minus the show's regulars (a formatting concept likewise common to Perry Mason) cowboy Pruitt (Jeremy Slate) arrives in Dodge with a load of freight he's brought up from New Mexico. He dislikes the work but desperately needs the $100 the job pays. However, the drunk, surly freight master strings him along and eventually flatly refuses to pay him. Pruitt, also drunk, attacks the man, who winds up dead.

It's not clear exactly what happened. Pruitt admits he was too drunk to remember, though he concedes he might well have murdered the man, that it may not be a case of self-defense. Transporting Pruitt back to Dodge, Matt is bemused by Pruitt's friendly, at times humorous demeanor and his almost existential acceptance that his life is essentially over. En route they encounter a crazy old-timer who shoots Matt. Pruitt saves Matt's life. But rather than run, Pruitt digs the bullet out of Matt's shoulder and nurses the Marshal back to health, with a grateful and surprised Matt promising to testify in Pruitt's defense. However, a last-minute change in judges results in Pruitt receiving the harshest possible sentence - death by hanging - over Matt's strong objections.

While transporting Pruitt to another town to be hanged, Matt decides to set Pruitt free, even though Matt will certainly lose his job and possibly go to jail himself. Pruitt rides off but catches up with Matt hours later. Pruitt explains to the Marshal that Matt obviously felt morally obligated after Pruitt saved his life, but that now, through Matt's selfless gesture, that debt has been paid. Now they can ride together to the hangman with their consciences clear.

At the town where the hanging is to take place, the local deputy abuses Pruitt like an ordinary murderer. Matt eventually slugs the oaf. "That's for both of us," he tells Pruitt. Pruitt is led to the gallows but Matt can't bring himself to watch the hanging, and walks away as the lever is about to be pulled.

I noted last time that some of these best Gunsmokes have the flavor of Larry McMurtry's acclaimed Western novels (Lonesome Dove, etc.). "The Gallows" certainly achieves that high standard. John Meston teleplay is also certainly up to the level of the very best writing being done for American series television in the 1960s. (And, for that matter, so is Andrew V. McLaglen's direction.) I hope those who've dismissed Gunsmoke up to now consider giving it a shot.

Gunsmoke looks exceptionally good on DVD. Shows are a bit overly grainy (especially during the opening titles, reworked slightly for syndication) but otherwise they're very sharp, very clean. The 17 black-and-white episodes are spread over five discs, with a total running time of about fourteen hours and 19 minutes. The Dolby Digital mono (English only) is clean and clear, and the shows include optional English SDH subtitles. The packaging allows viewers to read the episode descriptions inside the snap case without having to remove any of the discs. Well, except for the last three episodes, that is.

Technically, the Gunsmoke expansion was only partially successful. The ratings actually dropped, from the Number 1 prime-time show with a 37.3 rating to the Number 3 show (behind Wagon Train and Bonanza) with a 28.3, though it did extend CBS's dominance over Saturday nights to 11:00. More significantly, the quality of the show doesn't suffer, with some truly outstanding shows in this set. A DVD Talk Collector Series title.