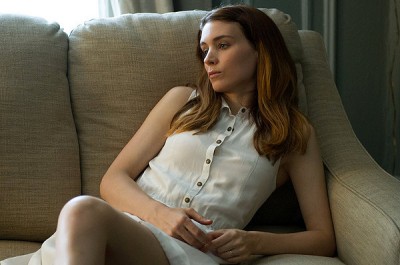 The filmmaking team that made the world scared of Gwyneth Paltrow's germs in the pandemic thriller Contagion have now reteamed for a psychological suspense picture that preys on another modern anxiety: that we are all guinea pigs for the pharmaceutical companies. Writer Scott Z. Burns and director Steven Soderbergh, making what is at this point his swan song, return to theaters with Side Effects, a mystery about a girl with depression and the deadly results of a particular cure for her blues.

Rooney Mara (The Girl with a Dragon Tattoo) stars in Side Effects as Emily, a 28-year-old struggling with depression. A few years ago, her husband (Channing Tatum, Magic Mike) was convicted for insider trading, and the couple lost everything. Emily managed to keep it together and is waiting for hubby when he is released. Only, the reunion stirs up old feelings, and she tries to kill herself. The psychologist on duty called to see her after her failed suicide attempt takes an active interest in her case. Dr. Jonathan Banks (Jude Law, Sherlock Holmes) is compassionate and eager to meet Emily's concerns. He is even encouraged to be a father figure to her by the girl's former therapist (Catherine Zeta-Jones, Traffic). That is why even though the medication he prescribed her causes her to sleepwalk and make elaborate meals in the middle of the night, he doesn't change it to something else. Emily doesn't want to start over.

Whether or not this was the right decision ends up being the question upon which Side Effects hangs. One evening, Emily stabs and kills her husband while sleepwalking. She has no memory of doing it and is even the one who called 911 hours later when she woke up. Dr. Banks is faced with a moral quandary, one he can't even be sure how to resolve. Does he defend himself and the drug and throw Emily under the bus, or does he back her insanity plea? Before he can make that decision, he must not only question himself, but also how much he knows the girl he took under his care. 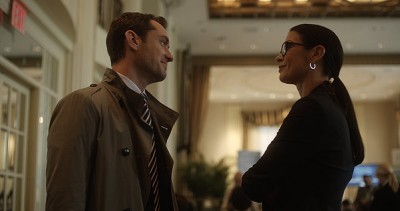 There are many zigs and zags in the second half of Side Effects, as the truth and lies all unravel. Burns' script is a very traditional wronged-man-style murder mystery in the way the story is set up, exposed, and debunked. Yet, Soderbergh--who also shot and edited the film under his usual pseudonyms--carves out the movie with a clinical precision, using the same kind of bare approach that made Contagion so different from the disaster movies that came prior. Using the Red digital camera, Soderbergh shoots with a startling immediacy, washing away the gloss of more traditional film and creating something colder, more utilitarian, almost like security footage. He saves the glitz for flashbacks, painting Emily's memories like scenes from romance novels, and for depicting her present-day paranoia in a manner intentionally reminiscent of Polanski's Rosemary's Baby. She is an untrustworthy narrator, played with a mercurial allure by Mara, who on the surface is playing the opposite of her Lisbeth Salander performance, showing a girl whose emotions are on the outside. The real trick, however, may be how in control she really is.

Soderbergh is a master filmmaker, one with an adaptable style, who lets the story dictate the look and feel of each motion picture. That said, movies like Side Effects may bare his most unique and identifiable fingerprint. Since he started experimenting with digital neorealism back in 2005 when he made Bubble, he has developed a quick and efficient way of cutting together a movie that both reclaims a 1990s indie ethos he helped invent and recontextualizes it for the new century. Movies as diverse as the kick-ass action picture Haywire and the experimental The Girlfriend Experience all fit into this category, being as close to each other as they are far from his biggest successes (Out of Sight, The Ocean's Trilogy). His output over the last seven years has been varied and prolific, and deserves to be heralded more than it has been. Maybe it hasn't been seen as truly exciting because, honestly, he made it look so effortless.

And to be honest, Side Effects isn't going to set the world on fire, either. As his theatrical bow (his real last movie, the Liberace biopic Under the Candelabra, is going to air on HBO), it's almost more of a slinking away, letting the curtain drop without any fanfare. Yet, Side Effects is so easy to enjoy, so unassuming in how enthralling it actually is, it makes me miss the guy already. Without a new Steven Soderbergh movie every six to nine months, the cinema is going to seem a little more empty than it used to. 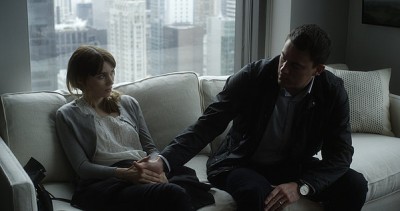