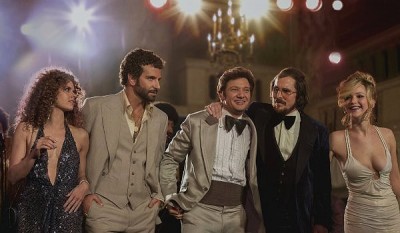 There are two ways in which we generally use the word "hustle" these days. In one sense, to hustle someone is to trick or con them; in the other sense, it is to give it a lot of effort, to keep moving, and make things happen. Luckily, a third meaning, a dance from the disco era, has mostly disappeared--though, it does make for a pretty impressive scene in David O. Russell's newest movie, American Hustle. The disco perennial actually makes this movie three for three, meaning the director's follow-up to Silver Linings Playbook is a wily creature, one that moves swiftly and goes all over the place to tell a big story about some genuine United States hucksters.

Christian Bale, who was also in Russell's The Fighter, stars as Irving Rosenfeld, a Bronx-born owner of a chain of dry cleaners that also sells art forgeries and deals short-con loans on the side. When he meets Sydney Prosser (Amy Adams, Man of Steel), a self-made gal new to the city, he finds his genuine soulmate. Her ability for reinvention makes her the perfect partner to bring in more suckers, especially when she starts presenting herself as Lady Edith, a Brit with connections to foreign moolah. Their relationship isn't perfect. Irving is married and has adopted his wife's young son as his own. She's not entirely stable, however, though Rosalyn (Jennifer Lawrence, The Hunger Games) has a pull on Russell he can't deny.

Rosalyn is a known element, however, one Irving can deal with. What ends up being more difficult to manage is the unknown variable of an undercover FBI agent who charms his way past Sydney's defenses and busts the two. Richie DiMaso (Bradley Cooper, The Place Beyond the Pines) is looking to do some hustlin' himself. He wants to increase his position at the bureau, and he offers Irving and Sydney/Edith a deal. If they can help him bag four more con men, he will set them free. It should be easy enough, except Richie isn't very smart and he's far too greedy, and before they know it, they are all caught up in an operation that involves the mayor of New Jersey (Jeremy Renner, The Avengers), the mafia, U.S. congressmen, and a fake Arab sheikh. 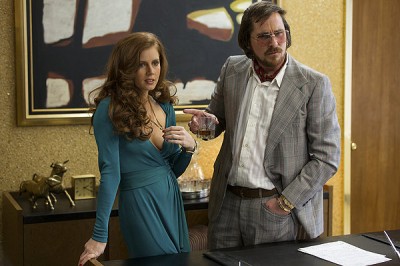 Not to mention cocaine, wide lapels, and lots and lots of bad hair. American Hustle is a sprawling love letter to the awful taste of the late 1970s. Plunging necklines clash with yards of browns and burgundies, polyester and otherwise. Bradley Cooper sports a bad perm, while Christian Bale has an epic combover. Only the ladies manage to make the decade work. Jennifer Lawrence has a fantastic updo, while former Law & Order cast member Elisabeth Röhm is nearly unrecognizable with a Jersey Shore version of the Lily Munster.

American Hustle is based in part on a true story, though David O. Russell, who shares co-writing credit with Eric Singer (The International), flagrantly tosses the truth out the window. He is more interested in making a variation of the Roman costume drama, a bacchanalia on the mean streets of New York. The narrative is cagey, swerving between crime, espionage, and family drama while tackling each with a delightfully macabre sense of humor. Trailers have smartly been disingenuous about the full nature of the plot, engaging in a little misdirection that makes American Hustle look like a more standard grifter film. It's far more than that. It's bonafide stars-and-stripes mythologizing.

Russell revels in the excess of the cocaine era, letting his actors cut loose and take the material wherever the mood strikes. The gamble completely pays off. Each performer shines in his or her own way, while never failing to serve the story or to give their collaborators something to work with. The core trio plays off each other incredibly well. Bale put on weight to deliver the Robert De Niro impression he's been working on his whole life (De Niro also has a small, but important, cameo), while Cooper appears to be finally getting to act out all the scenes that happen off camera in the "forgotten" parts of The Hangover movie. His dipshit bravado and false sense of triumph is riveting. Amy Adams takes a bit of a backseat to the antics, if only to serve as the lynchpin for the whole thing. In much the same way as she did in The Master last year, she is content to hang back and wait for her moment, stealthily moving in to take control as circumstances require. 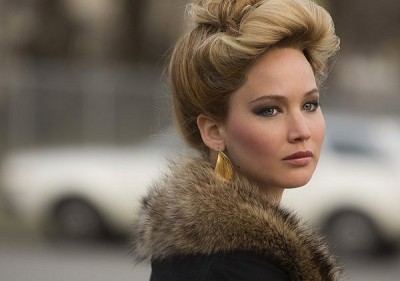 If anyone steals this thing, though, it's clearly Jennifer Lawrence. It would have been easy to make Rosalyn simply unhinged, but the calculation that the actress puts into the performance is only matched by her character's uncanny knack for manipulating the situation. There are several standout scenes featuring Lawrence, but the best one...well, you'll know it when you see it. I propose now, a Sir Paul McCartney biopic with Lawrence playing Macca. (I mean, if Cate Blanchett can play Bob Dylan...)

American Hustle has style and story to spare. It goes to such truly unexpected and daring places, it almost seems a shame to have already made you read this far. It embodies so much of the American spirit and lifestyle into what is widely considered a truly American medium. David O. Russell is entirely on point, accommodating multiple points of view and playing several schemes at once, all coming together for a satisfying crescendo where everyone gets their due. Like I said, it hustles in ever sense of the word. It delivers on its trick, making for one hell of a dance. 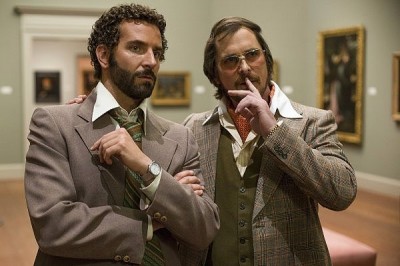