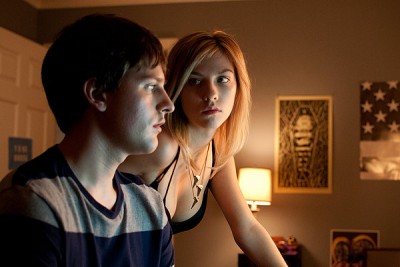 Men, Women & Children is a title--and a movie--that attempts to encompass everything. Except the Oxford comma. Which you'd think would have been important to the filmmakers given everything else their movie kind of says about the state of grammar in today's communication. You can practically tell their simulations of adults and teens texting apart just by who knows where the apostrophe is on their keypad.

Then again, given the fact that Men, Women & Children has a kind of a forest-for-the-trees thing happening, it's not surprising that some details are lost in the earnest pursuit of so many others. The problem that co-writer and director Jason Reitman (Juno, Up in the Air) has, though, isn't that he can't see the forest, it's that he thinks he does, and he ignores the good trees within it by trying to have it all. 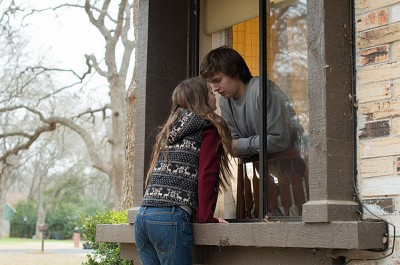 Co-written by Erin Cressida Wilson (Secretary, Chloe) and adapted from a novel by Chad Kultgen (The Incredible Burt Wonderstone), Men, Women & Children is the knotted story of a suburban Texas community where lives of quiet desperation are played out on touchscreens and in chat rooms rather than face to face with the person standing right next to you. Reitman builds an ensemble of teens and their parents and watches as their narratives weave around one another. The smart and creative girl (Kaitlyn Deaver, Justified) whose mother (Jennifer Garner, Dallas Buyers Club) tracks her every virtual movement finds a kindred spirit in the sensitive jock (Ansel Elgort, Carrie) who has quit football in favor of his online role-playing game after his mother left town with another man. That boy's father (Dean Norris, Breaking Bad) eventually finds comfort in the one-time actress, now single mom (Judy Greer, Arrested Development), whose own daughter (Olivia Crocicchia, Rescue Me) is maybe showing too much of herself on the internet in pursuit of celebrity. That girl in turn has a thing for a teen addicted to bondage porn (Travis Tope), which has rendered him incapable of having a normal relationship. Meanwhile, his own parents (Adam Sandler, Funny People, and Rosemary DeWitt, Your Sister's Sister) have reached a point in their marriage where they can no longer connect and so explore other options. Online. Because most of this is happening online.

And that's not even everybody in this story, but that is enough to give you an idea of what Men, Women & Children is attempting to pull together. Just to make things more complicated, the whole thing is narrated by Emma Thompson (Howards End) and uses the writing of astronomer Carl Sagan and the intergalactic travel of Voyager 1 to frame all of this petty, earthly b.s. Some of which is actually okay, but Reitman needed a little tough love in the editing room. Someone with a judicious and merciless pair of scissors could trim this two-hour movie down to about 80 minutes of something worthwhile. The first thing to go would have to be the cutaways to space. They aren't worth it for the movie's denouement where we found out the Sagan-obsessed teen, shock of shocks, was misinterpreting Sagan all along. 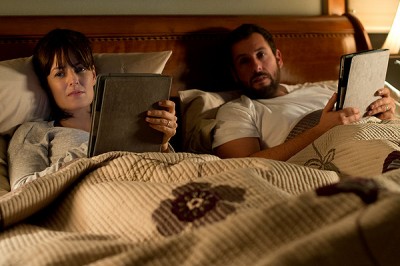 Reitman has his moments. With this level of cast, how could he not? Performers of this caliber will find the truth in just about anything, with Sandler and DeWitt delivering the most impressive work as the well-meaning marrieds who have forgotten where and how to find love. Which really says something. If Adam Sandler is the dependable one in a movie, and the rest of it is falling down, you've really gotten everything out of whack. The construction of the scene where husband and wife step out on each other for the first time is really quite excellent, with Reitman's regular editor Dana E. Glauberman showing a deft eye for juxtaposition, smoothly jumping between the two dates, and even threading other events of the night through them, illustrating and commenting on the spaces between while also emphasizing what makes them the same.

If only the rest of Men, Women & Children had the same focus. Where Reitman could have succeeded would have been in honing in on the key relationships and making his movie about these very specific lives. If he had done that, Men, Women & Children might have been something resembling a millennial The Ice Storm. Instead, Reitman seems to have cribbed more from Lawrence Kasdan, and thus Men, Women & Children comes pre-aged so it feels just as out of date as Grand Canyon does now--and keep in mind there is over twenty years between them. Maybe if Reitman had realized that not all adults are as clueless about the internet as he has chosen to portray them. The cheap comedy of the scene with Phil LaMarr as the child psychologist is painful for how off the mark and out of touch it is.

But then, satire isn't Men, Women & Children's strong suit. In fact, the satire is cheap and even a little smarmy, with Reitman adopting the same guilded-tower vantage point as Todd Field in Little Children. The didactic nature of their intent gets in the way of their empathy, something Ang Lee would never allow. He'd have let the emotion win over the commentary, a balance Reitman had in Up in the Air and especially in Young Adult, but that seems to have escaped him here. 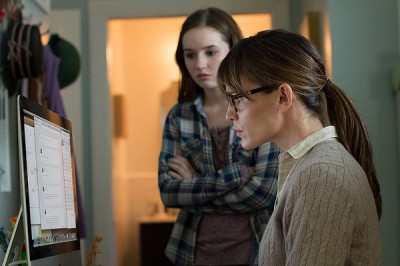