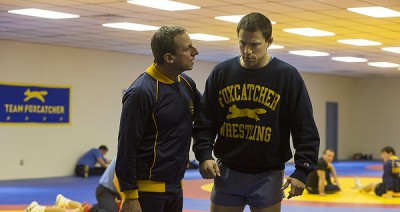 Bennett Miller has made a name for himself carving erudite dramas out of real-life topics, directing the late Philip Seymour Hoffman into an Oscar in Capote and making the mathematics behind baseball riveting in the Aaron Sorkin-penned Moneyball. I mention his collaborators, because despite a remarkable cast and other respectable contributors (including Capote screenwriter Dan Futterman), Miller's latest directorial effort, Foxcatcher, is missing something. He never finds that same spark.

This time around, Miller mines the true story of an Olympic gold medalist and his rich benefactor and the way their relationship turned sour. Channing Tatum plays Mark Schultz, who dominated the wrestling category at the 1984 Summer Olympics. In 1987, when Schultz was training for the world championships and looking forward to a return to the big arena at the 1988 Olympics, he received a call out of the blue from John du Pont, the head of Du Pont Chemical and the heir to one the largest fortunes in America. du Pont is played here by Steve Carell, nearly unrecognizable under layers of prosthetics and speaking in a molasses-twanged drawl. du Pont was a Greco-Roman wrestling enthusiast, and he offers to back Schultz if he'll come and train on his estate. Mark wanted to take the gig with his brother, David (Mark Ruffalo), himself a gold medalist and his regular coach, but when David balks, Mark takes the chance anyway, clearing room for him to go completely under du Pont's wing.

The set-up is pretty good at first, but between the world match and Olympic trials, Mark has begun partying so hard with du Pont, he nearly blows it. Worse, when du Pont transfers his mommy issues to his protégé, it causes a rift between them. David comes in to help, but the damage is irreparable. Violence outside the ring is on the horizon.

It's a story with such inherent scandal, one can easily imagine it adapted into a ripped-from-the-headlines episode of Law & Order. Miller takes a different approach with Foxcatcher, however. He underplays the drama and turns up the discomfort. His movie is about two strange men who can't communicate very well circling a variety of personal issues and indulging in their own pettiness, with a few speeches about patriotism and the glory of sport thrown in for good measure. Miller prefers languid takes, letting the scenes roll out slowly, while keeping his hands out of the muck. It makes Foxcatcher come off as rather self-serious and, quite often, dull. It's as if Miller wanted to make a high-brow true crime picture, something even Truman Capote would've turned his nose up at, because he's far too good to sully his lens with the blood and sweat that comes from grown men in super tight onesies throwing each other around for the fun of it. 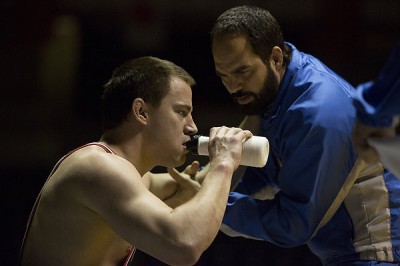 For their part, the actors make a grand effort to give these people the lives they deserve. Both John du Pont and Mark Schultz are emotionally unavailable, saying very little, shambling about with the broken posture of men who have grown their bodies to unnatural proportions and then beaten themselves up. Carell is getting a lot of the accolades for Foxcatcher because he is so far from his normal comic persona, but it's really Tatum that is making a name for himself here, delivering on the promise his fans have seen from him in far lighter movies like Magic Mike and 21 Jump Street. Playing Mark, it's about subduing his charisma, working with less, letting the emotion play out in his reactions rather than taking action. Where Carell really only has two notes to hit--mysterious and humiliated--Tatum has to cover the entire spectrum.

The relationship between the two is key. They begin as a boss and employee, morph toward father and son, then friends. There is also a homoerotic tension. The way du Pont carouses with his wrestlers, rolling around with them as if he were able to keep up, one keeps expecting there to be a revelation of some other kind of abuse. The pathology of du Pont's predatory behavior certainly suggests it. Yet, no explanation ever comes, which renders the climactic tragedy of Foxcatcher particularly hollow. Did the rift between the two men really come down to the tiny slight we've seen? Is there no point where anyone questioned the childish reaction on Schultz's part? Were there really no tearful confrontations or some armchair psychologists hanging around? The way Miller portrays it, accurate or no, doesn't really come off. There just seems to be no there there. Hell, I'd have settled for some closure on all that "make America great" talk or some kind of commentary on the Freudian psychoses of the rich and powerful. 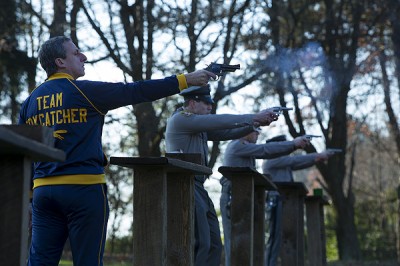 Swinging back to the positive here, it's a credit to Miller's ensemble that they keep Foxcatcher afloat. Anthony Michael Hall, Sienna Miller, and Vanessa Redgrave also have minor roles, but special mention must also be made of Mark Ruffalo's turn as the older, more earthy brother. David's practical approach to things is admirable, and ultimately his integrity is part of what causes du Pont to become unhinged. Ruffalo demonstrates a quiet strength and dignity, using the wrestler's physicality to turn inward, to appear humble, to show he understands how a coach needs to manipulate certain situations to keep his player on track. Watch how he lights up when he's really teaching. All that inner strength and confidence comes bubbling right up.

Which I guess is what Bennett Miller must have found the most interesting thing about Foxcatcher, all that nasty stuff under the surface. It's not that I wanted him to exaggerate or get all histrionic, but there is such a thing as leaving too much in reserve. It only makes for good drama if you eventually crack everything open and let the darkness come pouring out. 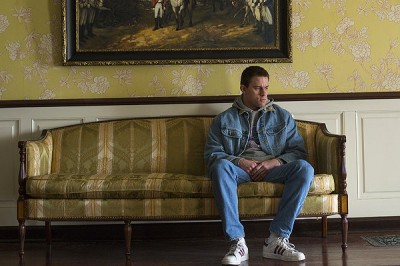