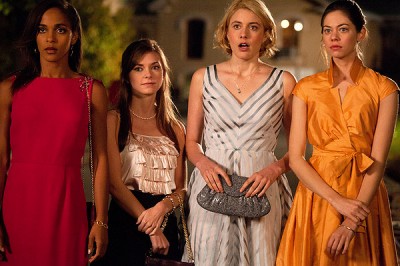 Whit Stillman is still Whit Stillman after all these years. The godfather of Wes Anderson and Noah Baumbach. Like the Terence Malick of college-aged dramedies.

Thirteen years after The Last Days of Disco, which seemingly ended a storytelling cycle about ushering the disaffected and privileged out of the illusions of early adulthood, writer/director Stillman has returned with a sweet, urbane comedy about university life. Damsels in Distress is an imperfect, episodic film that manages to garner a lot of laughs and even some genuine sentiment. At times, it almost seems to be a parody of itself, preserving Stillman's ideal world in a hermetic bubble; at other times, it is magical in its overthinking, like a New Yorker short story adapted by Jacques Demy.

Greta Gerwig (Greenberg) leads an ensemble cast as Violet, a self-invented arbiter of taste, morals, and social mores. She is the leader of a group of girls who run their small college's Suicide Prevention Center, prescribing donuts and coffee along with tap dance and unconventional philosophizing to the school's most depressed students. At the start of Damsels in Distress, Violet and her pals decide to adopt a transfer student, Lily (Analeigh Tipton, who was so good in Crazy Stupid Love), and make her a part of their group. It's a sly send-up of the Mean Girls model: Hey, girl, don't go with them, go with us.

Unsurprisingly, Lily is both seduced and repulsed by Violet's ideas. Stillman's script tracks their up-and-down relationship and their many debates over proper behavior and even the semantics of social interaction. Violet, who only dates dimwitted, unattractive men, loses her frat boy beau (Ryan Metcalf) to one of the sad girls she tries to help, while Lily is caught between smooth-talking Charlie (Adam Brody from The OC) and skeevy Eurotrash playboy Xavier (Hugo Becker). They swap clothes and they even swap boys, and eventually come to some understanding: both are seeking their place in the world by their own means, Violet's are just more pronounced than Lily's. 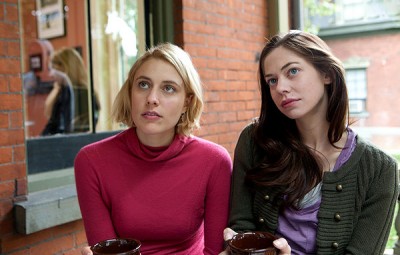 Starting with his early-90s debut, Metropolitan, Whit Stillman's movies have always had a certain archness to them. His films could easily be dismissed as twee paeans to the upper classes, but to do so would be to miss the refined self-satire that quietly simmers underneath the onscreen action. Damsels in Distress has the broadest comedic strokes of any of his four features, particularly in his exaggerated portrayals of the fraternity brothers (theirs is a Roman system, not Greek) and the common kids in the regular dorms. What he spares these "lessers" is the self-importance of youth. Early on, Violet draws a line between herself and the editor of the school paper (an excellent Zach Woods, from In the Loop and TV's The Office, playing what would have been the Chris Eigeman role ten years ago), citing his arrogance as her primary motivator for hating him. Lily immediately points out the inherent hypocrisy in such a statement, an accusation that Violet owns. Quite winningly, in fact. Greta Gerwig, who impresses more and more with each movie, manages to create a kind of innocent self-awareness. As Violet herself says, good intentions matter.

Not every part of Damsels in Distress works so well. For instance, I normally like Aubrey Plaza (Parks and Recreation), but her two scenes as an angry dancer at the Suicide Prevention Center stand out as overly insistent. The actress' Janeane Garofalo impression calls too much attention to itself. Other scenes come off as similarly unnecessary anecdotes, failing to contribute to the whole. Ironically, this looseness is also inherent to the charm of Damsels in Distress. If Stillman had succumbed to pulling the narrative together tighter, it wouldn't be quite the same.

Ultimately, what the filmmaker is trying to do here is evoke some old fashioned Hollywood self-invention. Violet may have made up her name and continually lies about her past and her cousin Pat in Philadelphia, but it's all born of the desire to have a happier life, which she then compulsively tries to share with the rest of the world. Her belief that obsessive behavior can unlock happiness eventually translates into attempts to create a "worldwide dance craze," a device that in turn allows Stillman to embrace the movie musical and its skewed representation of an idealized world. Like the aforementioned Mister Anderson, Whit Stillman is most comfortable when retreating into an imagined retro aesthetic, and his cinema ends up being about the clash between this rarefied lifestyle and the reality of the here-and-now. Damsels in Distress doesn't refute the fantasy, nor does it necessarily champion it--neither Violet nor Lily wins, both have their failings--but rather, Stillman accepts that there is nothing wrong with, from time to time, wanting to imagine the world in your own image, whatever you choose for that image to be. 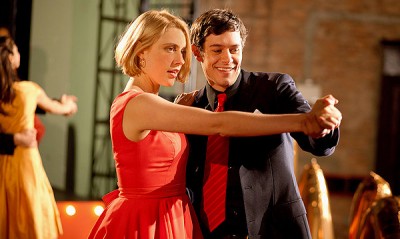