One I Love, The 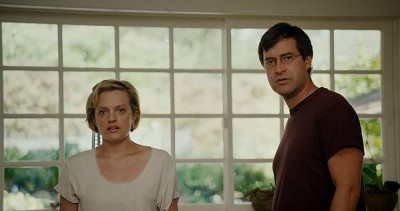 An indie with an intriguing premise, The One I Love is a smart and surprising take on the romantic comedy. The script by Joe Lader adds an interesting dimension to the set-up of a troubled couple on a weekend retreat, one that the trailer only hints at and that I've seen other venues treat as a spoiler. I find that dumb, as the whole point of the movie is that there is this twist, it's what makes it more than your average love story. You can't talk about The One I Love without at least telling the first big reveal. So, be forewarned--and I'll warn you again--if your hackles are raising just reading this, you won't want to travel past the next two paragraphs.

For the spoiler seekers and avoiders alike, here's what you need to know: Mark Duplass (The Mindy Project, Cyrus) and Elisabeth Moss (Mad Men, Top of the Lake) star as Ethan and Sophie, a married couple looking to close their growing distance. Ethan is over analytical, Sophie can be a bit too critical, but in the opening scenes, we quickly get the sense that he tends to be the problem. He thinks more than he listens, living in the past rather than looking to the future. He also cheated on her. As a last-ditch effort, their therapist (Ted Danson, Bored to Death) recommends a house in the country where they can be alone and away from it all. It's a lovely place, but here is where bizarre things start to happen.

And here is where some of you should check out. You like Mark Duplass? You dig the quirky movies he produces with his brother, like Baghead? How about Elisabeth Moss? Here's your chance to see her in a modern role where she can apply a lighter touch. They are a great couple. They develop a good chemistry and Duplass' natural acting style draws nice things out of Moss. You'll believe they may not like each other much now, but they definitely loved one another once. Actually, if you liked Safety Not Guaranteed (also starring Mark Duplass) and enjoyed the kind of science-fiction garnish that made it more than your typical boy-meets-girl scenario, then you definitely want to get in line for a ticket to The One I Love.

You also want to stop reading now. I don't blame you. I hadn't even watched the preview before I saw The One I Love. The element of discovery works in its favor. Go ahead and close this tab. 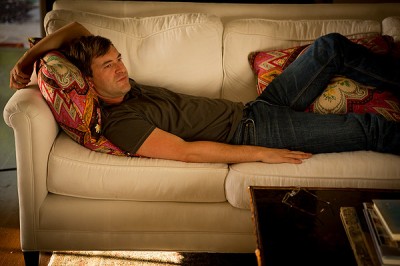 For those still here, the wrinkle in the narrative fabric of The One I Love is that, in addition to the main house at this getaway, there is also a guest house. What Ethan and Sophie soon discover is that when one of them is alone in the guest house, he or she is visited by a doppelganger of the other. Sophie can converse and even have sex with an exact copy of Ethan who seems to think he actually is Ethan but as he reveals himself more and more, he is apparently the idealized version. Here is the husband she always wished she had.

If that all sounds a little Twilight Zone-y to you, well, that's fine, it's by design. Ethan, when he realizes what is happening, describes it as The Twilight Zone himself. For once, however, the filmmakers actually get what that means. This is not some kind of Richard Kelly too-weird-to-be-real premise or M. Night Shyamalan fake-out. Rather, Lader has written a script that captures what really made Rod Serling's classic anthology show so effective: the weird happenings are meant to shed light on the human condition, to illuminate the particular hang-ups of the people those things are happening to. The "twist" is less important than what it does to the participants and, even further, what they do in response.

Thus, The One I Love becomes about how Ethan and Sophie react to this thing they've discovered. She embraces her über-husband and engages with him during her sessions in the house (only one can go in at a time). Ethan prefers to stand outside and solve the mystery. He can't figure out how to best his better self. Lader and director Charlie McDowell (Bye Bye Benjamin) engage with the premise whole-heartedly and pursue the many narrative tributaries it suggests. This is not a movie that raises a bizarre idea only to jettison it with a nice, clean conclusion. Lader plays the fundamental writer's game of "what would you do?" while also trying to plug any plotholes nitpickers in his audience might try to exploit with their own game of "what if?" If I had one complaint, it's that he doesn't let Ethan #1 spend enough time with Sophie #2, but Lader compensates with some unexpected developments regarding what Ethan can get up to while trying to knock over this particular house of cards.

The fun part is how The One I Love keeps you guessing about where it is going while also challenging your own reactions. Whose side are you on? What would you do if faced with the same options? Does what happens help or hurt the two lovers? Who owns what aspect of their shared pain? Thankfully McDowell and cinematographer Doug Emmett (Damsels in Distress, Bachelorette) keep it simple in terms of how they shoot this thing. Though working in natural-seeming light and limiting their sets, they don't indulge in the kind of mumblecore roam-and-zoom that producer Jay Duplass might have employed in his own movies (The Puffy Chair, Cyrus). They'd rather you have your feet firmly planted and let the story do its work.

Some may be disappointed. You may end up wanting a different kind of wrap-up, you may wish they explored other emotional pockets or went deeper into the ones they do climb into, but as with the best Twilight Zone episodes, it will make you think and consider and debate, meaning you'll still be considering The One I Love and what it all means by the time it's on DVD or streaming on Netflix and you're ready to watch it again. 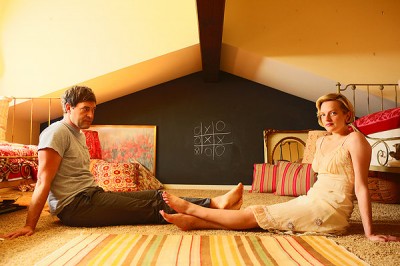