"I had a beautiful dream about a gumball machine. Can I tell you about it?" 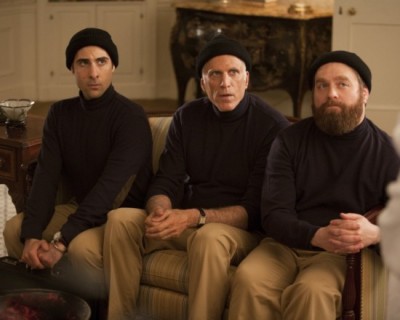 Please Note: The stills used here are taken from promotional materials, not the Blu-ray edition under review.

I'm sad to see Bored to Death go. Though The Complete Third Season of HBO's literary comedy was a mite sillier than the two seasons that had come before, there is a familiar groove to how the characters get on with one another and the peculiarities of series creator and writer Jonathan Ames' way of portraying the world that always made it good fun to watch.

This final season recognizes and focuses on Bored to Death's main assets: the triumvirate of Jason Schwartzman (Rushmore), Ted Danson (Cheers), and Zach Galifianakis (The Hangover) as its three lead characters. This trio of overgrown teenagers play, in reverse order: the needy comic book artist, the one-time publishing titan, and the author who has taken to supplanting his writing income with private detective cases. Schwartzman's character is a loose version of Jonathan Ames himself, a neurotic nutball who lives as many stories as he invents. For Bored to Death: The Complete Third Season, the real-life Ames has cooked up an overarching theme that informs the subplots of the eight episodes here. Namely, he makes this season about fatherhood.

All three of the guys take center stage with some aspect of their lives relating either to their own fathers or being a father themselves. For George, it's having his spacey daughter (Halley Feiffer) come back into his life. She appears with a new fiancée (Sledgehammer himself, David Rasche), an older man, nearly George's own age. This freaks George out. As he basically says, he might pursue a younger woman himself, but no father should want him dating his daughter. On the opposite end, Ray is starting to spend a day a week with the son he had via donating sperm to a couple of lesbians in a previous season. Daddy daycare is not a job he's particularly suited for.

Somewhat related to this, Jonathan discovers in the two-part season opener that the man who raised him is not his biological father, he was conceived by a sperm bank withdrawal. So, the mystery of the Third Season is who Jonathan's old man really is. In the midst of this, he has also released a new book, a collection of stories based on his moonlighting as a P.I. He will also continue to take individual cases, like guarding the family jewels of a college girlfriend (Casey Wilson, TV's Happy Endings) and pursuing a doppelganger who has stolen his identity (Brett Gelman, The Other Guys). 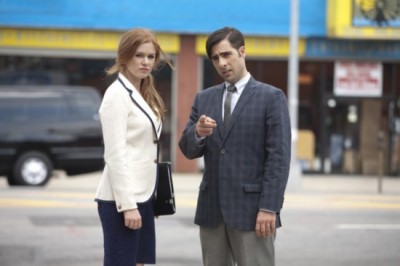 In this cycle, the parody strays from genre and more into relationship issues. And it's all a gas. Galifianakis gets a very funny subplot where he discovers he is an "elder lover" and begins an affair with a senior woman (Olympia Dukakis). Jonathan teams up with another donor baby (Isla Fisher) to search for clues regarding their parentage, and they end up dating. George also gets involved with his singing coach (Danson's real-life wife Mary Steenburgen) and has to face his propensity to run from real feelings, a problem that extends to his relationship with his child. Much is made of the irony of how he acts as a dad to the boys, but can't commit elsewhere, especially when Ray starts staying with him. Though, it's by virtue of his money that he is the patriarch; his real connection with his younger pals is how the vicarious thrill of them getting into trouble spills over into very real thrills for George.

Guest stars featured in these final shows include Sarah Silverman, Stacy Keach, Chris Elliot, and in one particularly hilarious episode, Dick Cavett playing himself. There are also many returning performers: Patton Oswalt, Oliver Platt, John Hodgman, Samantha Bee, and Bebe Neuwirth. The casting on Bored to Death is excellent, all the way down too the smallest role (with maybe the exception of Wilson, who I always find to be a bit to much like an overexcited drama student). By this point, the principal actors have locked in with one another and work with an effortless precision; the introduction of these outside elements keeps things fresh and offers new avenues to explore. While in other seasons, Danson usually stole the show, in this one, he and Schwartzman and Galifianakis share fairly equal portions of the spotlight. Galifianakis maybe gains a little bit of an edge on his compatriots as Ray gets more childlike, creating more opportunities for humorous grandstanding. It's actually delightful to see the comedic actor working this far away from caricature; Ray is probably his most legitimately realized role.

Bored to Death: The Complete Third Season hums with fine comedic timing and benefits from having more heart than previously--even if, ironically, the show simultaneously feels less earnest about its mission. It's still odd, but more cartoony, born less from personality quirks and maybe suffering from being a little too comfortable. Perhaps that's why it didn't click with audiences as much as it should have; or maybe it was the opposite, the earlier seasons were just too off-the-wall to be popular. Either way, it's too bad that Bored to Death didn't get a longer lifespan, as all the characters are in new and interesting places by the season closer. I liked spending time with them every week, and I'd love to see where they go from here. Hey, Netflix, you got room for one more? 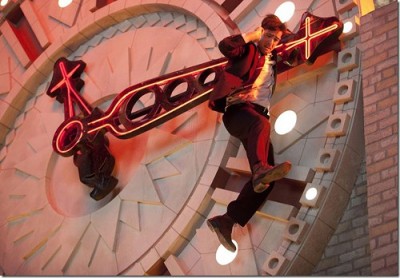 Video:
I am never disappointed by an HBO release, and Bored to Death: The Complete Third Season looks fantastic on BD. The 1080p/AVC-encoded high-definition transfer, presented in its original widescreen broadcast ratio, is awesome. The resolution is sharp and the colors warm and vibrant. Skin tones look realistic, and the level of detail reveals hair and fiber texture. Dark scenes also look good, with solid blacks evident even on the closing credit sequences. There are no digital glitches, it all looks great.

Eight episodes are spread over two discs, four on each. You can watch them all at once or choose them one at a time.

Sound:
As with previous seasons, the soundtrack is given a DTS-HD Master Audio 5.1 mix. It sounds fabulous, with nice volume modulation that allows the music to get loud, but never drowns out the conversation.

You also have the choice of French in DTS 5.1 and Spanish DTS 2.0, plus subtitles in all three languages (incl. English SDH).

Extras:
The Blu-Rays come in a nice cardboard book with plastic trays and an outer slipcover. The animated menus are amusingly playful, featuring art by Dean Haspiel, who also animated the title sequence and is the inspiration for Ray.

All eight episodes have a "previously on" option, as well as short "Inside the Episode" bits with Jonathan Ames talking about his inspiration for each segment. Four shows also get audio commentaries, with Ames and Schwartzman joined by director Michael Lehmann (Heathers) on episodes 1 and 3, and the addition of John Hodgman on the #3 track; Ames and Schwartzman are also on 5 and 8 with Danson and Galifianakis, as well as those episodes' respective directors.

Half the episodes come with outtakes, and five of them have deleted scenes.

Bonus features can be chosen either along with the individual show or they can be accessed via a separate menu.

FINAL THOUGHTS:
Highly Recommended. Bored to Death: The Complete Third Season may be its last, but hey, at least the show is going out while we can still remember it fondly, right? The fictionalized life of author Jonathan Ames has been a blast to watch for the last three years, and Jason Schwartzman, Ted Danson, and Zach Galifianakis produced some of the finest work of their careers. Bored to Death could be a little all over the map, but that was part of its charm. For its final cycle, Ames adds themes of fatherhood to the meta-plot and pushes his characters a little closer toward growing up, and it makes for a fine finish. 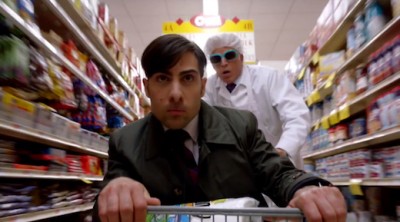