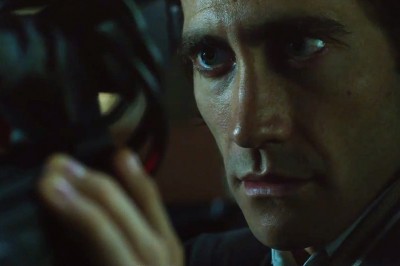 A nightcrawler, in addition to being a blue mutant with teleportation powers in the X-Men, is a freelance news reporter who spends the dark hours chasing calls on police scanners in hopes of getting salacious footage to sell to the local television news. It's a nocturnal vocation where the more bloody and twisted the situation, the better.

In the movie Nightcrawler, Louis Bloom (Jake Gyllenhaal,Prisoners) is a strange loner eager to find a career. When he spots a stringer, as nightcrawlers are also called, filming an accident on the side of the freeway, he asks the man (Bill Paxton, Edge of Tomorrow) for a job. When the answer is no, Louis decides to go into business for himself.

Armed with a video camera, Louis rushes out to find something to shoot. He follows the maxim "if it bleeds, it leads." Lacking any training, Louis doesn't have a working knowledge of journalistic ethics. Personal boundaries also seem to be an issue. He gets in too close, filming a carjacking victim being worked on by paramedics, getting all the gory details. He takes it to the news station and talks his way in. The footage catches the attention of the late-night news director, Nina (Rene Russo, The Thomas Crown Affair). She likes what she sees, and she encourages Lou to bring more.

Screenwriter Dan Gilroy (The Fall, The Bourne Legacy) makes his directorial debut with Nightcrawler. He builds his movie around Lou, a quick study who is swiftly moving from being a petty thief to an up-and-comer in the field of guerrilla newsmaking. He may also very well be a sociopath. At one point, he expresses out loud that he really doesn't care what happens to people, and this is evident as he pushes the bounds of taste further and further in pursuit of the winning shot. At a car crash, he moves a body into better lighting; at a home invasion, he enters the house before the police get there, capturing footage of the multiple homicides and leaving one man to choke out on his own blood. Ratings increase, as does his confidence. What decreases is any moral compunction he might have. 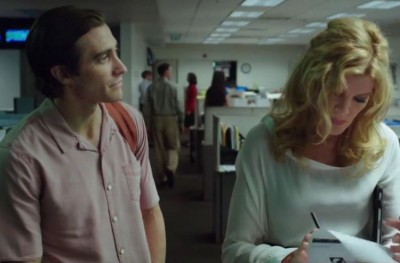 When I say Gilroy built Nightcrawler around Lou, what I really should say is he builds it around Jake Gyllenhaal's performance. While there is some solid writing when it comes to the Lou character--and very little when it comes to any other character--it takes a particular screen presence to give such a fictional construct life. Gyllenhaal is fully committed to the role. He loses weight and grows his hair long and works out a personality profile that involves a lot of false modesty and strange tics. Everything Lou does is self-serving, and Gyllenhaal delivers his lines with just the right slant to make it hard to tell exactly where Lou is coming from. That is, unless you pay attention to his eyes. The truth is always there in Lou's eyes. You can see him watching and absorbing everything and then plotting his next move. It's all there in how he looks at the people and his surroundings.

Gilroy seems fairly confident as a director, but he's not without his issues. Here and there, the first-timer throws in unnecessary rookie flourishes, like cutaways to satellite dishes and transmitter towers that are more pedestrian and distracting than arty. He also needs a less obvious-minded composer than James Newton Howard (The Hunger Games), who lends an air of manipulation to the film's emotional climax that underscores the accidental laughability of the moment (i.e. Russo and Gyllenhaal talking about how much she wants it) rather than playing up the intended seriousness. Gilroy does, however, have a good sense of how to put a scene together and how to shoot action. There is a car chase, for instance, that is actually quite spectacular. Credit there might be given to the fact that he has the great Robert Elswit (Mission: Impossible - Ghost Protocol) behind the camera and John Gilroy (Michael Clayton) in the editing bay, but then again, credit goes to a smart director who makes the right hire. (It's a family affair: John Gilroy is Dan Gilroy's twin brother, Rene Russo is Dan Gilroy's wife.)

It's not really the technique that fails the first-time director, it's his old profession. The script he has concocted just doesn't go the distance. My guess is that Gilroy envisions Nightcrawler as his Taxi Driver, and Louis Bloom is his Travis Bickle. Like Scorsese's film, Nightcrawler is the examination of a particular time and place, of a dark pocket where most people don't care to go. In this case, rather than the seamy underbelly of New York City and the political trappings that allow for such urban ruin, it's the streets of Los Angeles and the scandal-obsessed media that dismisses its obligation to inform the public and encourages indulgences in the worst possible behavior. Or so one might extrapolate, as Nightcrawler fails to make any point whatsoever. Just what exactly are we supposed to get out of Louis Bloom's successes? Is there some way that we are supposed to interpret his outcome?

Not from what I can tell. Gilroy has merely created a snake that feeds on itself, and its leavings don't really do much more than stink up the place. One might forgive the obvious implausibility of much of the ending were there some point to be made, or were we even to be horrified by Lou the way we were by Bickle, but by then the whole shebang has gotten so exaggerated, we fail to see either ourselves or our world up there on the screen. We should be witnessing the tragedy and, as empathetic human beings, asking what's it all for; instead, we only find ourselves pondering that question as we check the time on our phones while exiting the cinema. The resounding answer is "not much at all." 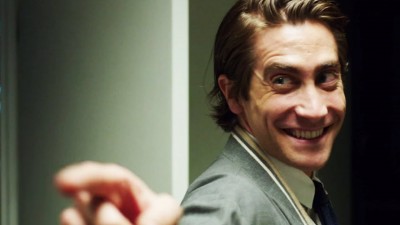